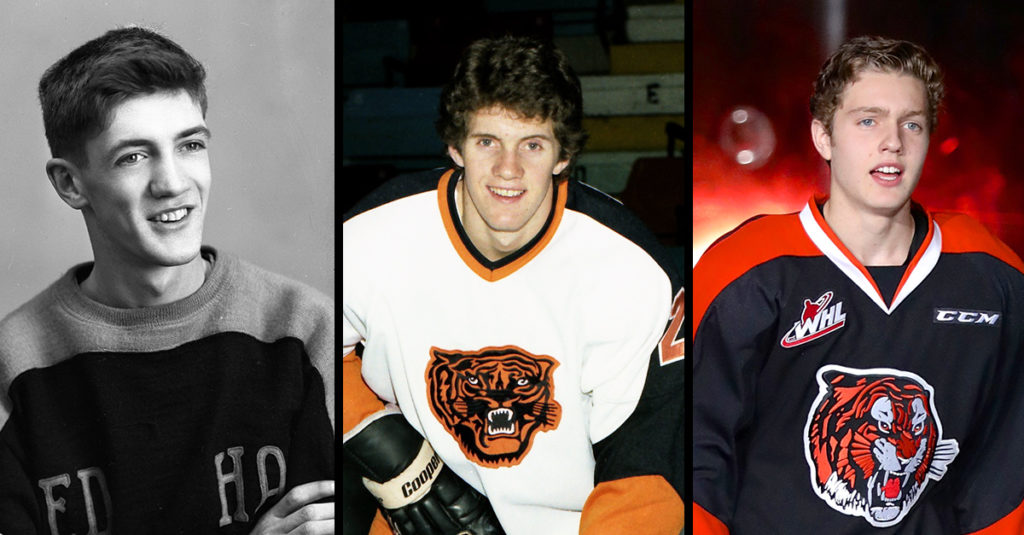 Medicine Hat, AB –  Three generations of Cravens have suited up for the Medicine Hat Tigers.

Currently, Joel Craven is the only known third-generation player in the league. He is following in the footsteps of his father Murray and his grandpa Ron who have both proudly worn the Tigers crest.

“It means a ton to not only me but my family,” Joel said. “Following in the path of both my dad and Grandpa Ron is just a great honour. Seeing the Tigers crest and putting on is an unbelievable feeling knowing I’m a third generation, Craven, to put it on.”

Joel is about to embark on his second season in the Orange and Black and knows that his father is proud to see him playing for his old team and in his hometown.

“It’s special for sure,” said Murray. “I would have wanted him to go to college and go that route, but once he went to training camp last year and showed that he was able to be a player in this league, that this is what he really wanted to do, I said okay you can go and do that but this is where I want you to play so I couldn’t be happier.”

Murray played for the Tigers from 1980 to 1984 and was able to live at home with his parents, which was rare back then.

“It was unusual for a player that born and raised in that town to actually play for his junior team so I think for me that was one of the special things that I was able to experience. I got to live at home,” said Murray.

Living at home was really beneficial to Murray since he considers his father, Ron, to be the smartest hockey man that he has ever met.

“I grew up in a hockey family. My father was the biggest, most knowledgeable hockey fan I ever knew throughout my whole life. I was in the NHL and obviously, I ran across a lot of great hockey people in my life, but to this day, he still would be the smartest hockey man that I ever met and he just so happened to be my dad so I was really fortunate for that,” said Murray.

Interestingly enough, Ron’s grandson’s favourite part of playing for the Tigers is the time spent with teammates as well.

Ron’s nickname when he played hockey was Crafty Craven and he was a prolific goal scorer.

“I think that’s an awesome nickname and I wish I got to see him play because I’m sure it directly related to his game,” said Joel.

Joel is happy to follow in the footsteps of his family he is looking forward to being a second-year player and having a bigger role on the team this year. He spent his summer working hard to be ready for this season.

“Over the summer, I worked on my size and strength. I also improved my shot,” said Joel.

Joel and the Tigers will open the 2018-19 season on the road in Lethbridge Friday, September 21st before returning home to the Canalta Centre to host the Hurricanes Saturday night. There will be a tailgate party starting at 5:00 p.m. hosted by Skinny’s Smokehouse with all proceeds going to the Medicine Hat and District Food Bank. The game starts at 7:30 p.m. and fans are encouraged to be in their seats early for player introductions.