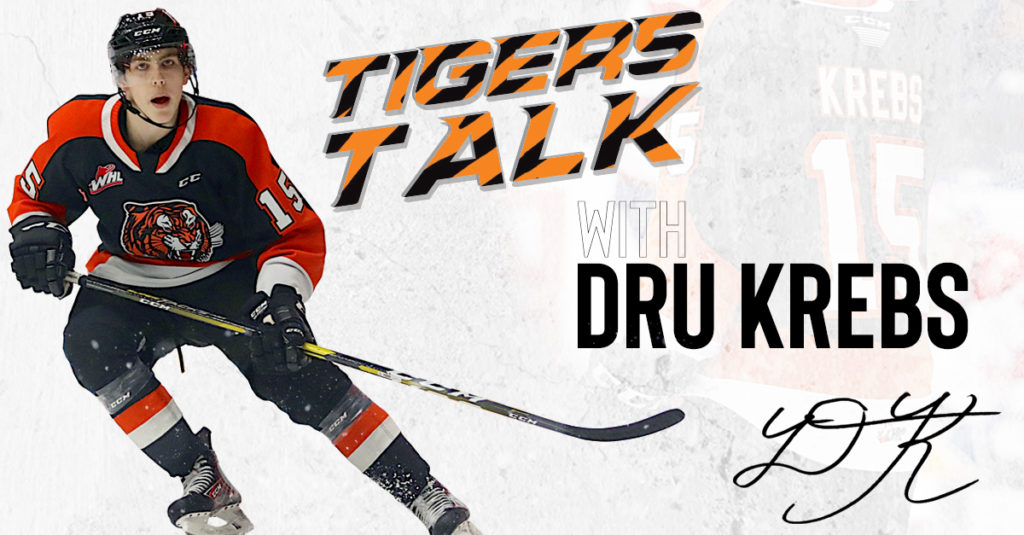 Medicine Hat, AB – The Medicine Hat Tigers rookie defenceman Dru Krebs credits his coaches, his older brothers, Dakota and Peyton, and his teammates for the progress he has made this season.

“I personally think that my season with the Tigers so far has been going great, I have felt more confident and comfortable as the season has gone on which I credit to the coaches who have instilled a lot of trust in me,” said Krebs.

The 16-year-old Okotoks product was drafted by the Tabbies in the second round of the 2018 Bantam draft and he made his regular season debut with Medicine Hat in their season opener September 20th, 2019, in Lethbridge. Krebs is one of two 16-year-old rookies on the Tigers’ roster along with forward Cole Sillinger. He is also one of a handful of 16-year-old rookie defencemen playing in the league this season and the Tigers coaching staff couldn’t be happier with his progress.

“We’ve been really impressed with how well Dru has played so far this year. It’s a huge challenge to play in our league as a 16-year-old defenceman and Dru has stepped right in and played great. His skating ability and hockey sense allows him to make an impact on the game every night. When you mix that with his work ethic and drive to get better, it makes him a real special player,” said Assistant Coach Joe Frazer.

In order to prepare to make the transition from playing with the Okotoks Bow Mark Oilers of the Alberta Midget Hockey League (AMHL) to playing for the Tigers in the Western Hockey League (WHL), Krebs looked to his two older brothers, Dakota of the Calgary Hitmen and Peyton of the Winnipeg ICE, for guidance.

“They (Dakota and Peyton) have been huge for me to model myself after as they both demonstrate great habits off and on the ice that I learned from them and put into myself. Seeing what level they were at allowed me to gain reference points on where I needed to be in order to make the jump into the WHL. Then they helped guide me by showing what I needed to do to get there,” said Krebs.

Playing in the same division as his oldest brother, Krebs has faced off against Dakota in five regular season games as well as one preseason game.

“Knowing our first battles started in our basement and now we get to play against each other at the WHL level is crazy, but still lots of fun,” said Krebs of the experience of facing off against Dakota. “It’s hard not to notice when your brother is making his way down the ice with the puck and not laugh, but I try to focus on the game at hand instead of how I’m playing my brother who is four years older than me that I never thought I would play against.”

After starting his WHL career at 16 for the Tri-City Americans, Dakota was traded to the Calgary Hitmen in his 18-year-old season where he has been an alternate captain for the past two years. Their other brother Peyton is the captain of the Winnipeg ICE and he has been playing for the ICE franchise since his 16-year-old season. Peyton was drafted by the Vegas Golden Knights this past year but he was injured to start the season and did not play when the Tigers and ICE met in October. Wednesday night the Tabbies travel to Winnipeg where Krebs will face Peyton for the first time.

“It will be crazy like playing against Dakota, but uniquely different with Peyton because as a forward he will be more involved offensively against me. Being able to play against my brothers in person is a far different experience than just watching them from afar and it will be a unique memory that we will share for the rest of our lives,” said Krebs.

When asked who his parents cheer for whenever any of the brothers face off against each other, Krebs said they usually cheer for whoever is on the ice but when they are both out on the same shift, it is a toss up and that his mother despises when that happens.

Outside of his coaches and older brothers, Krebs credits his teammates for helping him develop this season.

“A lot of the older guys in the d-core have helped me develop my own game by just playing and practising the way they usually do and allowing me to observe and replicate what they do. As well as, point out to me different options on how to confront players,” said Krebs.

When reflecting on his season so far with the Tigers, Krebs said that scoring his first career WHL goal has been the most memorable moment for him which he scored October 15th, 2019, in a 3-1 Tigers victory over the Saskatoon Blades at home.

“Scoring my first goal symbolized me reaching a goal that I had set for myself and achieved through a lot of hard work and dedication,” said Krebs.

Krebs and the Tigers are in Manitoba this week and they lost 4-3 to the Brandon Wheat Kings last night. Tonight they will face off against the Winnipeg ICE.