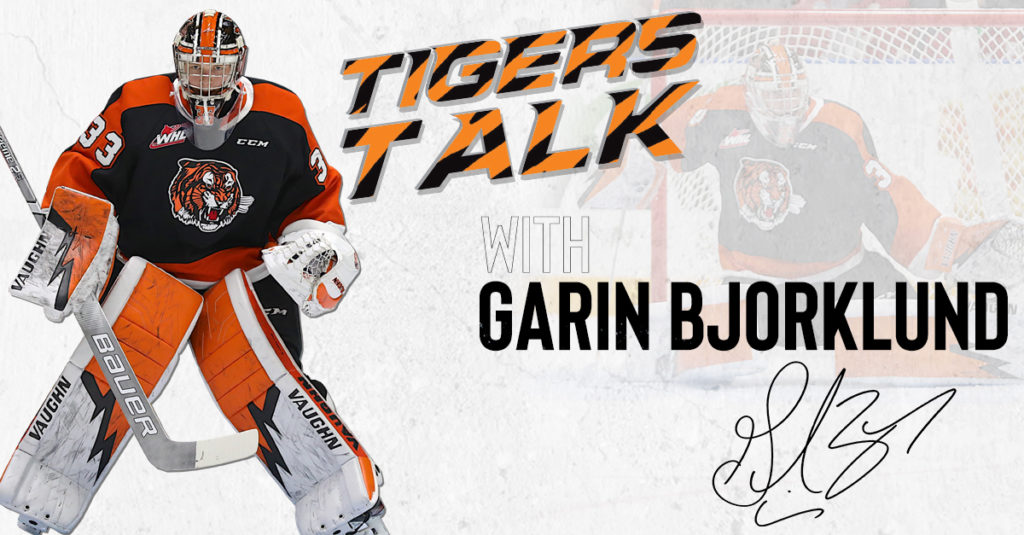 The 17-year-old rookie was called up as an affiliate last season to back up former Tiger netminder Jordan Hollett while current teammate Mads Søgaard was away representing Team Denmark at the World Juniors. During his time with the team last year, Bjorklund started and won two games for the Tabbies.

“Coming up after Christmas last year was a great first taste of WHL action,” said Bjorklund. “Being able to win both of my starts last year definitely gave me a sense of comfort and confidence going into this season.”

After his stint with the Tigers last year, Bjorklund returned to his midget team, the Calgary Buffaloes, and went on to win the Alberta AAA Midget Hockey Championship where he posted a 1.76 GAA and 0.934 SAV% during the post season. After the Alberta Championship, the Buffaloes defeated the Cariboo Cougars from Prince George in the Pacific Regional Finals to earn their spot at the Telus Cup where they finished fourth.

Other than the experience he gained last year with the Buffaloes and playing up as an affiliate, Bjorklund credits his family for helping him prepare to take the next step in his hockey career in the WHL. In fact, Bjorklund’s other brother, Paycen, plays for the Tri-City Americans.

“Watching my brother go through it before I did, helped me see how hard I have to work to get to this stage. Going into my first camp, he just told me to enjoy the experience and play, don’t overthink everything and I definitely think that helped me,” said Bjorklund.

Paycen is a 2000 born forward who was drafted in the second round, 25th overall for the Americans in the 2015 Bantam Draft. He is currently in his third season with Tri-City but unfortunately, fans will not be treated to a Bjorklund versus Bjorklund match up tonight as Paycen is currently out with an upper body injury.

Growing up with an older brother who played forward, Bjorklund was often put in net when they would play hockey in their garage so Paycen could shoot on him. However, that is not why Bjorklund choose to pursue playing goal.

“I became a goalie though my older cousin who was a goalie,” said Bjorklund. “He would strap on the pads in our outdoor rink and watching him play with all the crazy gear made me want to try it and I’ve loved it ever since.”

Bjorklund’s love for the game and his position are evident in the way he competes every night and pushes himself to get better.

“Garin is everything we could have hoped for and more. The points he’s been able to get us when he’s been in the net have been integral to our success as a team. His competitiveness, athleticism, work ethic and respect for the game are qualities that exemplify what being a Tiger is all about,” said Tigers Goaltending Coach Matt Wong.

The Tigers’ first round draft pick in the 2017 Bantam draft went won his first five straight starts this season before losing his first game. He is now 17-5-1-0 in his rookie season and he has posted a 2.99 GAA and 0.897 SAV%.

“I feel like I had a strong start to the season and as the season went on it has had its ups and downs but all around it has been really,” said Bjorklund.

Reflecting on his time in the WHL so far, Bjorklund’s most memorable moments have been wining his first start when he played up as an affiliate last year as well as earning his first shutout when he helped the Tigers defeat the Swift Current Broncos 7-0 in late January. Despite having a mostly successful rookie campaign, he continues to look for ways to improve.

One aspect of his game that Bjorklund has been working on developing this season has been the mental side. He has been focusing on not overthinking the game and playing with poise to keep himself in the best position possible and help the Tigers succeed this season.