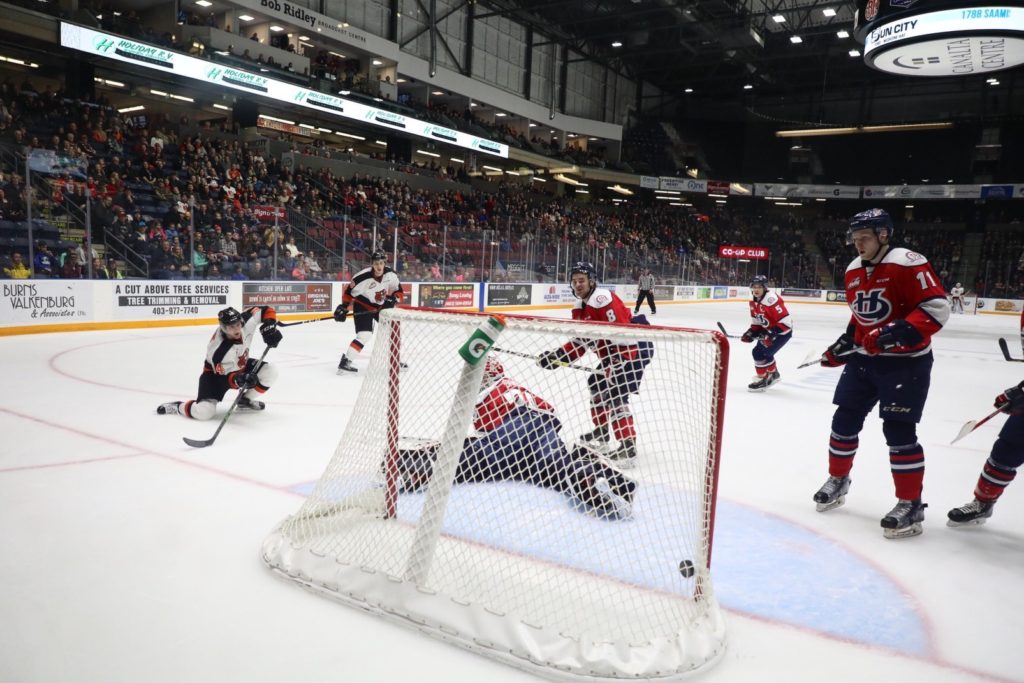 Medicine Hat, AB — Saturday night was a big game for the Medicine Hat Tigers as they looked to keep ahead of the Lethbridge Hurricanes. The Canes came into the night unbeaten in their past 15 games, their second streak of 12 or more games this season. Medicine Hat was coming off a 7-2 dominating victory over the Calgary Hitmen just 24 hours prior and looked to carry the momentum into Saturday.

It was a quick start as a streaking Tigers power play went to work coming off a 3/5 night in Calgary just 2 minutes into the game. Chad Butcher and Steven Owre whipped the puck around and Mark Rassell ended up finding Clayton Kirichenko who got the 4419 in attendance into a frenzy with his 10th of the season. The game was an up and down affair as the Hurricanes would’t back down. The next goal was crucial and Canes goaltender Stuart Skinner and Tigers netminder Michael Bullion battled shot for shot making it difficult for shooters to find the back of the net. Heading into the break the Tigers held the 1-0 lead in dominating fashion.

An early penalty to Kirichenko to start the second period had the Tigers on the penalty kill for the first time. They took advantage of an aggressive Lethbridge power play and James Hamblin scored his 16th of the season on a nice feed from Jordan Henderson, who would extend his point streak to 4 games. The physical game continued into the period. Dalton Gally, didn’t back down from the physical play standing up multiple Canes players at the blue line with solid checks. The Tigers defense have been very good as of late, putting lots of pressure on their opponents and Saturday night was no different. Before the period ended Ryan Jevne would bury his 9th of the season following up his shot to cash in on a rebound, extending the lead to 3-0.

The final period was important for the Tigers as they knew the Hurricanes are capable of putting up 3 or more goals in one period. Flashback to these two teams last meeting on December 30th when the score ended 9-7 for Lethbridge. Fast forward to Saturday and the Tigers shut down the neutral zone and included a solid penalty kill to keep the momentum on Medicine Hat’s side. Zach Fischer and Mason Shaw would score in the period extending the lead to 5-0, the eventual final score. For Bullion it was his first career shut out as he stopped 18 shots for the victory, his 9th already since the trade from Portland.

Medicine Hat takes a few day off from game action before hosting the Victoria Royals, their final Western Conference opponent this season. Next weekend the Tigers will travel to Swift Current before coming home to face Edmonton Saturday night.