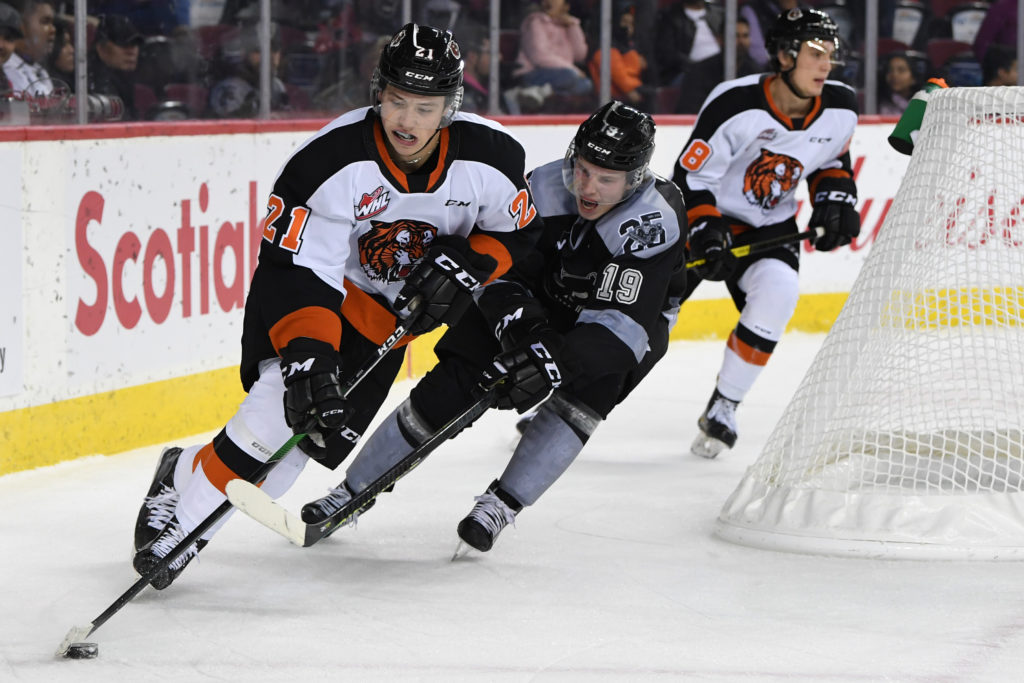 The Tigers scored three goals in just over eight minutes to chase goaltender Jack McNaughton from the net but they were unable to solve relief netminder Brayden Peters despite firing 26 shots at him.

Cole Sillinger opened the scoring just over a minute into the game on a play from Brett Kemp.

Taking advantage of back to back 5 on 3 power plays, Ryan Chyzowski sniped two goals just over a minute apart. Both of Chyzowski’s goals were assisted by Sillinger and James Hamblin.

After Chyzowski’s second goal of the game, McNaughton was replaced by Peters. McNaughton stopped 6 of 9 shots faced in just over eight minutes played.

Late in the first period, Jackson van de Leest scored his first goal of the season to get the Hitmen on the board. The Tabbies headed to the dressing room leading 3-1 after 20 minutes of play.

The Hitmen scored twice in the second stanza to tie the game up 3-3. Carson Focht and Mark Kastelic were the goal scorers for Calgary.

In the final frame, the Hitmen added three more goals to win the game. Kastelic scored his second of the night to take the lead for the home team before Riley Stotts added a pair.

Tigers netminder Mads Søgaard left the game at 11:21 of the third period after making 36 saves on 42 shots faced. He was relieved by rookie Garin Bjorklund who stopped all four shots faced.

The Orange and Black are now 8-3-1-0 and they will travel to Edmonton on Friday to faceoff with the Oil Kings.