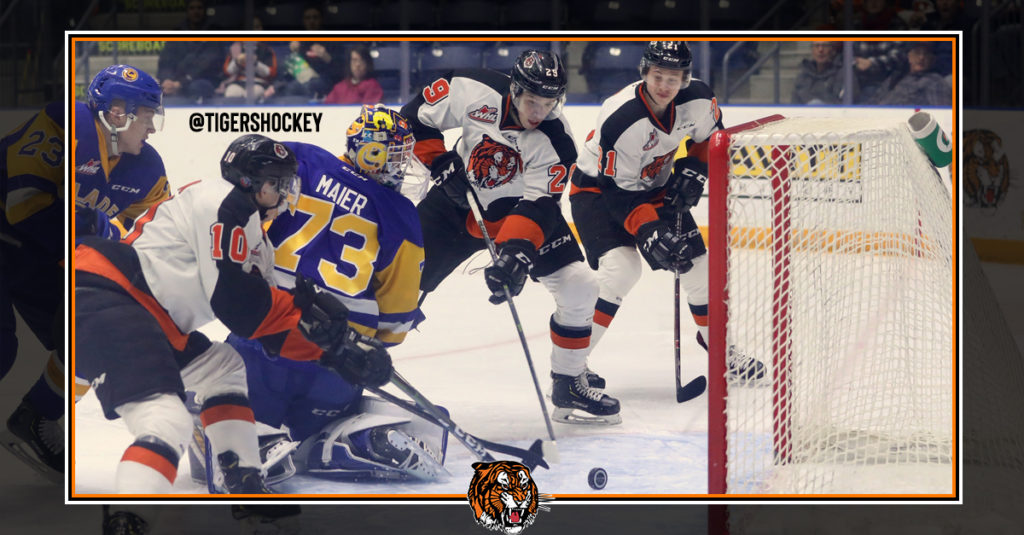 Medicine Hat, AB — The Medicine Hat Tigers returned home from a successful road trip and fell 6-3 to the Saskatoon Blades.

On the Tabbies’ first power play of the night, Ryan Jevne took a shot from the point and the puck bounced over Blades’ goaltender Nolan Maier. Captain James Hamblin was there to put the puck into the net and open the scoring for the Tigers. Hamblin’s 31st goal of the season was assisted by Jevne and Dylan MacPherson.

Late in the opening frame, Blades veteran forward Max Gerlach scored on the power play to send both teams to the dressing room locked at 1-1.

Midway through the second stanza, Blades Ryan Hughes scored before Gerlach added his second of the night to give the visitors a 3-1 lead.

Just under three minutes after Gerlach’s second goal, Logan Christensen carried the puck up the ice, went behind the Blades’ net and fed the puck to Nick McCarry who fired it in over the blocker of Maier to score his second goal of the season.

Tigers began to have momentum but with 22 seconds left in the second period, Eric Florchuk scored for the Blades to give them a 4-2 lead after two periods of play.

Early into the final frame, the Blades scored another two quick goals. Tristen Robins and Chase Wouters were the goal scorers who effectively chased Mads Søgaard from the Tigers’ net 3:52 into the period. Søgaard made 22 saves on 28 shots faced before being relieved by Jordan Hollett.

The Tigers continued to push and late in the game while on the power play, Ryan Jevne scored his 26th goal of the season. Brett Kemp and James Hamblin combined on the play.

Hollett stopped all five shots faced while Maier turned aside 25 of the Tabbies’ 28 shots.

The Orange and Black are now 31-19-3-2 and will play a home and home series against the 28-21-4-1 Calgary Hitmen. Friday the Tigers will pay a visit to the Saddledome before returning home to host the Hitmen Saturday night. Saturday’s game is brought to you by NewRock Developments and it is Chuck a Puck night in support of the Be YOUth Centre. The game will start at 7:30 PM.

DUCE SIGNS OFF
6 days ago