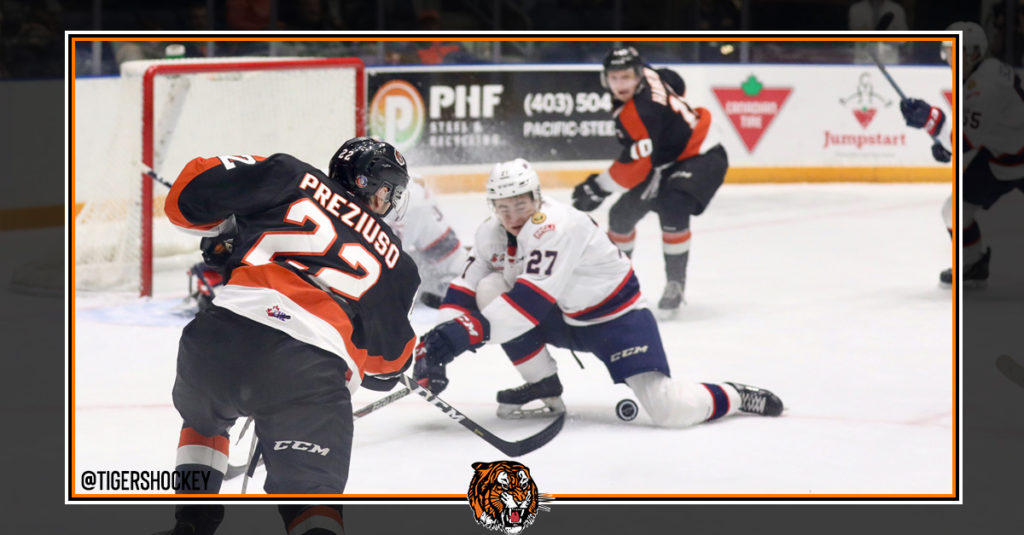 The Tigers put in a strong team performance and fired everything they had on Pats’ goaltender Dean McNabb, outshooting the Pats 46-25.

After a scoreless first period, Pats’ Jadon Joseph broke the stalemate early into the second stanza.

The Tigers were hungry for a goal and late in the period while on the penalty kill, Tyler Preziuso cleared the puck from the corner and Captain James Hamblin picked it up at centre ice. Hamblin then flew up the ice and scored his 15th goal of the season to tie the game up 1-1.

Early into the final frame, Ryan Jevne skated the puck in and fired a shot far side past the glove of McNabb to give the Tabbies their first lead of the night. Jevne’s goal was assisted by Logan Christensen and Mads Søgaard.

Midway through the period, Sergei Alkhimov scored to tie the game 2-2.

The Orange and Black continued to push to regain the lead and shortly after Alkhimov’s goal, Christensen deflected the puck into the net to score the game-winning goal. Christensen’s 3rd goal of the season was assisted by Daniel Baker and Jevne.

Shortly after Christensen’s goal, Jevne intercepted the puck in the neutral zone and scored his 14th goal of the season.

The Tabbies are now 15-14-1-2 and will host the Kamloops Blazer on Wednesday night at the Canalta Centre. The game will start at 7 PM.