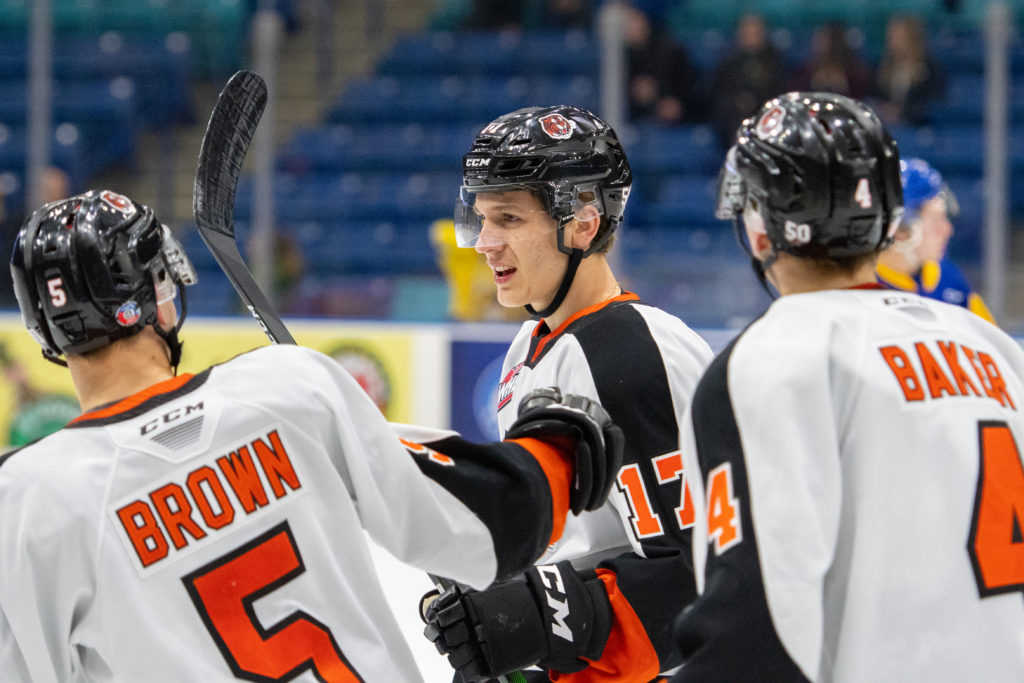 Forward Cyle McNabb who was acquired by the Tigers from Saskatoon on November 26th returned to haunt his old team as he scored his first career WHL hat trick and picked up an assist in the victory. Captain James Hamblin had five assists in the contest while forward Brett Kemp played his 200th career WHL game.

The Tigers scored twice 31 seconds apart early into the game to take the lead. James Hamblin combined with Dylan Plouffe to set up McNabb to open the scoring. Shortly after McNabb’s first of the night, Lukas Svejkovsky tipped in Hamblin’s shot to score his first goal with the Tabbies. Corson Hopwo also assisted on Svejkovsky’s first of the night.

Late in the frame, the Tigers added another three goals in less than two minutes to extend their lead to 5-0. While on the power play, Brett Kemp redirected Cole Sillinger’s shot to score his 11th of the season. Hamblin also assisted on the play.

Just over a minute later, McNabb passed the puck to Bryan Lockner near the top of the right side circle and Lockner pulled the trigger to score his first of the evening. Cole Clayton picked up an assist on the play. Fifty seconds later, Kemp passed the puck across the crease for Ryan Chyzowski to bury on the power play. Sillinger also combined on Chyzowski’s 13th goal of the season.

In the second stanza, Elijah Brown redirect a pass from Sillinger through MacInnes’ five hole while on the power play to score his sixth of the season. Hamblin assisted on the play.

Midway through the frame, the Blades got on the scoresheet when their captain Chase Wouters scored on the power play.

Just over a minute later, Brown fed the puck to McNabb in the neutral zone who beat his man one on one to score his second of the night. Rookie defenceman Dru Krebs assisted on the play.

With just over two minutes remaining in the second period, MacInnes came out of his net to play the puck but it was turned over and Brown was there to collect it. Brown passed it to McNabb who put a stick on it to score his first career hat trick and his sixth goal of the season.

Late in the period, Wouters struck again on the power play, scoring his second of the night. The Tigers headed to the dressing room leading 8-2 after 40 minutes of play.

In the final frame, Hamblin flipped the puck over the stick of MacInnes from behind the net and Svejkovsky was there to score his second of the night and seventh of the season.

In the final ten minutes of the game, Blades rookie forward Jayden Wiens scored on a turnover. Tigers netminder Garin Bjorklund left the game after the Blades’ third goal. Bjorklund stopped 20 of 23 shots faced in the contest and he was relieved by affiliate goaltender Evan Fradette.

Just over three minutes later, Daniel Baker scored his eight of the season on a play from Clayton and Chyzowski before Lockner added his second of the night by flipping a rebound over MacInnes to make it 11-3 for the Tigers. Lockner’s seventh goal of the season was assisted by Baker and Clayton.

Fradette stopped both shots faced in the nine minutes and five seconds he played.

The Orange and Black are now 21-8-1-0 and they will travel to Prince Albert to play the Raiders Wednesday night.