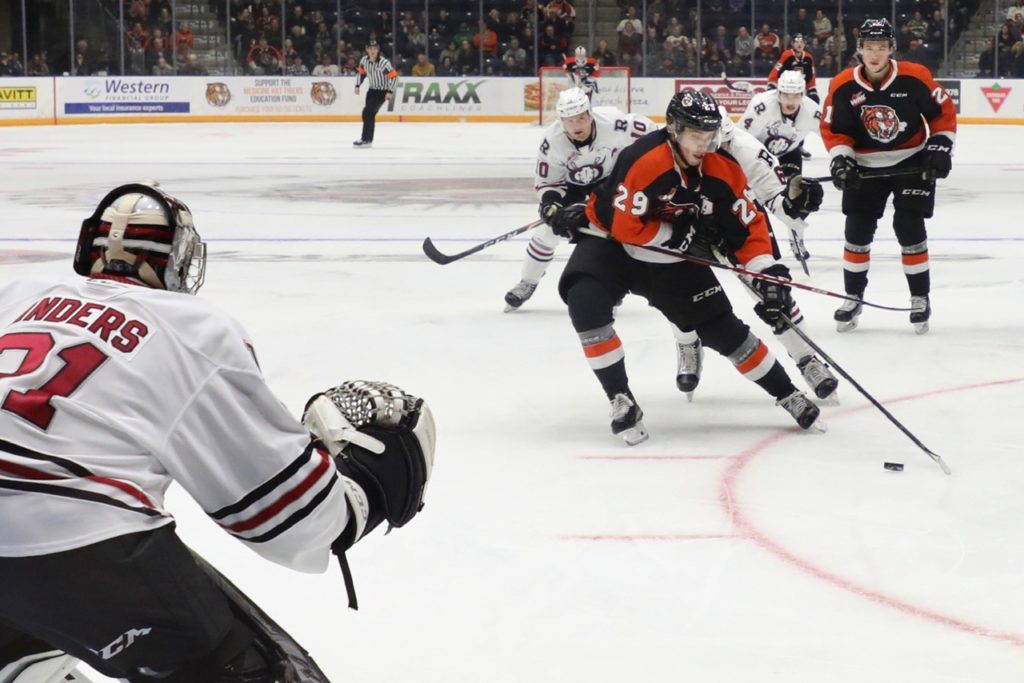 Medicine Hat, AB — The Medicine Hat Tigers were unable to complete the comeback and fell 4-3 in overtime to the Red Deer Rebels on Saturday night.

Captain James Hamblin scored on a penalty shot in the third period to tie the game up 3-3 and send it to overtime but the Red Deer Rebels scored 38 seconds into extra time to steal the victory.

Early into the game, rookie forward Jaxsen Wiebe scored his first career WHL goal to give the Rebels a 1-0 lead that they held onto throughout the whole first frame.

In the second stanza, Elijah Brown and Bryan Lockner combined to set up Trevor Longo to score his first goal of the season. Shortly after Longo’s goal, Brett Davis responded for the Rebels by netting his fourth goal of the season on the power play.

Midway through the period, Ryan Chyzowski won possession of the puck near the Tigers’ blue line and raced down the ice to beat Rebels goaltender Ethan Anders and tie the game up at 2-2.

The stalemate was once again short-lived as Ethan Sakowich scored for the Rebels late in the frame while they were on the power play. The Tigers went to the dressing room trailing the Rebels 3-2 after 40 minutes of play.

The Tabbies were tenacious in the third period looking for the game tying goal. With less than half the frame left to play, the Tigers were awarded a penalty shot and Hamblin stepped up to take it. He beat Anders to score his third goal of the season and send the game into overtime.

The Tigers are now 4 -2-1-0 and they will host the Portland Winterhawks on Tuesday night at the Canalta Centre. Be YOUth Centre Medicine Hat will be in the CF Industries Community Corner and the game is scheduled to start at 7:00 PM. Tickets can be purchased in person at the Canalta Centre Box Office or online through Ticketmaster.