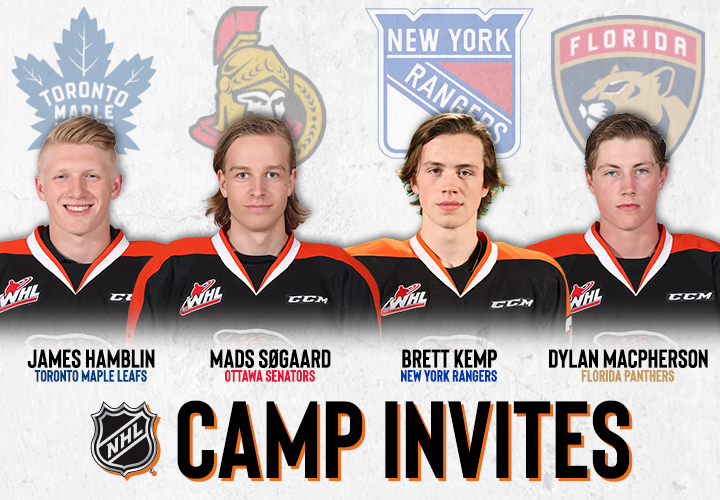 After having a breakout season in the WHL, rookie netminder Søgaard was drafted by the Senators in the second round, 37th overall. The 18-year-old Aalborg, Denmark native posted a 19-8-2-2 record with a 2.64 GAA and a 0.921 SAV% along with three shutouts in the 2018-19 season. The Senators Development Camp will take place Tuesday, June 25th to Friday, June 28th.

Talented, two-way forward Kemp set new career highs in all offensive categories this past season with 33 goals and 27 assists in 64 games. The 19-year-old Yorkton, SK native received a free agent invitation to the New York Rangers Development Camp that kicks off today.

Tigers Captain Hamblin was the team’s top point producer in the 2018-19 season with 77 points (33G, 44A) in 67 games. The 20-year-old Edmonton native is in Toronto for the Maples Leaf Camp that begins today on a free agent invitation.

Overage defenceman MacPherson was invited to the Panthers’ camp on a free agent invite for the second year in a row. After attending last year’s Development Camp, the 21-year-old Redcliff product was one of 13 players invited to attend the Panthers Rookie Camp in Fall of 2018. At the end of the Tigers’ 2019 playoff run, MacPherson joined the Springfield Thunderbirds, the Panthers’ AHL affiliate, to play in two of their final games where he picked up an assist. The Panthers’ camp will run June 27th to 30th.