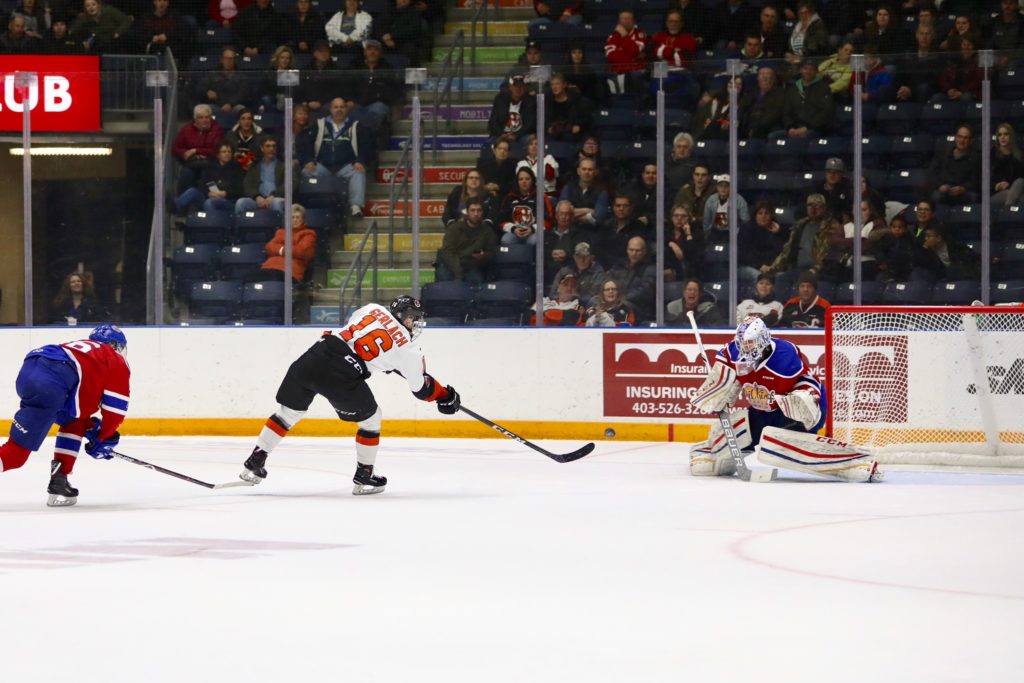 Four goals were scored in an exhilarating third period that saw the Medicine Hat Tigers triumph over the Edmonton Oil Kings 5-1.

Max Gerlach put on a strong performance for the Tigers scoring twice and adding an assist to earn the first star of the game.

On a cross ice play from Jaeger White and Kristians Rubins, Gerlach went top shelf on Edmonton Oil Kings goaltender Josh Dechaine to open the scoring for the Tigers on a power play. Despite only having 4 shots in the frame, the Tigers headed to the dressing room leading the Oil Kings 1-0 after 20 minutes of play.

Five minutes into the second period, Baxter Anderson pounced on Rubins point shot rebound on the left side of the net to score his first goal of this season doubling the Tigers lead. Dawson Heathcote also picked up an assist on Anderson’s goal.

Less than a minute into the final frame, Dechaine was caught out of position and David Quenneville slotted home a power play goal on an empty net to make it 3-0 Tigers. Mark Rassell and Ryan Chyzowski had the assists on Quenneville’s 17th goal of the season.

Davis Kope responded for the Oil Kings by beating Tigers netminder Michael Bullion by tapping in a cross ice pass to get the Oil Kings on the score sheet.

On a play starting from James Hamblin, Rassell redirected Quenneville’s shot to make it 4-1 for the Tigers midway through the third and collect his 34th goal of the season.

Gerlach stole the puck in the neutral zone, walked it in to beat Dechaine and finish the Oil Kings off 5-1.

Bullion turned aside 19 of Edmonton’s 20 shots; while Dechaine saved 21 of the Tigers 26 shots.