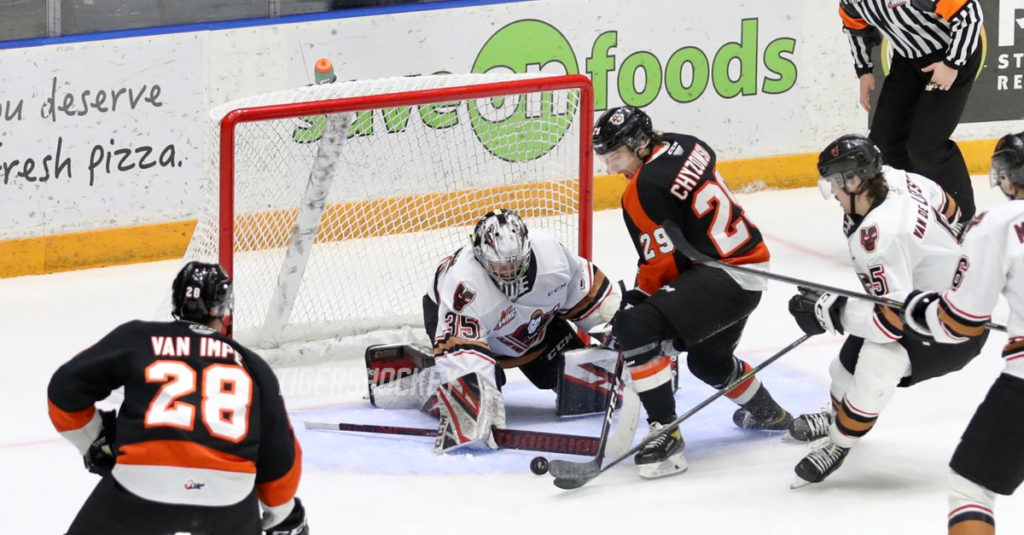 Medicine Hat, AB —  The Calgary Hitmen returned to the home ice of the Tigers to do battle in another three games in four nights.  They would no doubt love to take another game.

The Hitmen would have a young blueline for this game.  Carlin Dezainde, who is the grandson of Tiger alum Brian Carlin, would make his debut for the Tigers.  About halfway through the first period Ryan Chyzowski let go with a laser shot from just past the blue line and beat Peters handily.  Calgary would get their chance a few minutes later, on a power play, but Riley Stotts rang one off the post.  There were just 2 penalties issued to the Tigers and each time they were able to keep the Hitmen off the board.  The back and forth first period ended with Corson Hopwo making it a 2 – 0 score for the Tigers.  He was left all alone in front of the net and went top shelf with his 8th of the season.

Calgary came out with a little more urgency in the beginning of the second period. Riley Fiddler-Schultz was robbed by Bjorklund on a 2 on 1 rush.  The Tigers kept the Hitmen to the outside and the frustration started to show.  The Hitmen kept coming though, and were getting a lot of quality shots on the Medicine Hat goaltender.   It did pay off, as the Tigers had a turn-over and Josh Prokop made no mistake, to make it a 2 – 1 game.  Calgary was definitely trying to wear down their opponents.

The third period started out with an opportunity for the Hitmen but they rang another post just 2 minutes in.  Their opportunity ended quickly, as they took a high sticking penalty.  Lukas Svejkovsky made no mistake as he took advantage and got his 7th of the season with a nice wrap around.  Calgary would continue to press and the Tigers were starting to look a little tired.  The Hitmen’s Wiesblatt took a roughing penalty and again Point Roberts, BC Native Lukas Svejkovsky would strike with a quick wrister to make it 4 – 1 for the Tigers.   The frustrated Calgary team will have to look to the game on Saturday to try and even the score.

The Tigers will travel to the Seven Chiefs Sportsplex in Calgary for tomorrow’s rematch.  Game time is 7:00 pm.