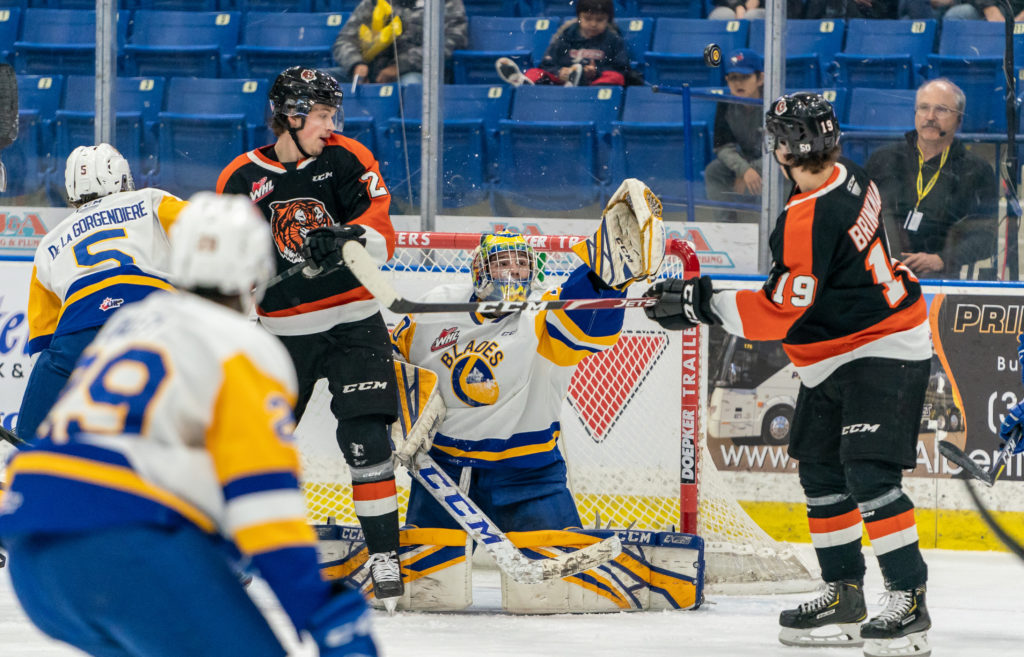 Captain James Hamblin and linemate Corson Hopwo each had two points (1G, 1A) in the contest while their other linemate Lukas Svejkovsky picked up an assist. Altogether their line now has 41 points in the 10 games the Tabbies have played in January.

After an icing call on the Tigers, Hamblin won possession of the puck at their blueline and tore away on a breakaway just over fifteen minutes into the game. Hamblin beat Saskatoon goaltender Koen MacInnes to score his 28th of the season and give the Tabbies a 1-0 lead.

Thirty-five seconds into the middle frame, Daniel Baker walked into the Blades’ end and fired the puck past MacInnes on his stick side. Baker’s 10th goal of the season was assisted by Hopwo and Svejkovsky.

Midway through the period, Jonathan Brinkman redirected Cole Clayton’s shot but MacInnes  stopped it. Baxter Anderson was on the back door, collected the rebound and potted it into the net for his third goal of the season.

A minute and 10 seconds later, Blades forward Tristen Robins was knocked into Tigers netminder Garin Bjorklund and the puck trickled into the net to get the home team on the board.

In the last five minutes of the period, the Blades scored a pair of goals to bring the game to a 3-3 stalemate. Kyle Crnkovic scored before setting up Chase Wouters on the power play to tie the game.

Early into the final frame, the Blades scored another pair of goals. Riley McKay scored his first of the night before Robins added his second. Afterwards, Bjorklund was relieved by Mads Søgaard. Bjorklund made 26 saves on 31 shots faced in 41 minutes and 55 seconds played.

Just over a minute later, Hopwo skated the puck in and beat MacInnes to score his 10th goal of the season. Parker Gavlas and Hamblin combined on the play.

A couple minutes later while the Blades were on a four on three power play, Robins scored his third of the night to make it 6-3 for the Blades.

In the last five minutes of play Nick McCarry dived onto a loose puck to score his seventh of the season and bring the Tigers within one. Dylan Plouffe and Cyle McNabb collected assists on the play.

Despite pulling Søgaard for an extra attacker late in the game the Tigers were unable to find the game tying goal and fell 6-5 to the Blades. Søgaard stopped 4 of 5 shots faced in his 16 minutes and 35 seconds played. MacInnes allowed five goals on 33 of the Tabbies’ shots.

Medicine Hat is now 29-14-1-1 and they will travel to Prince Albert to battle the Raiders Saturday night at the Art Hauser Centre.