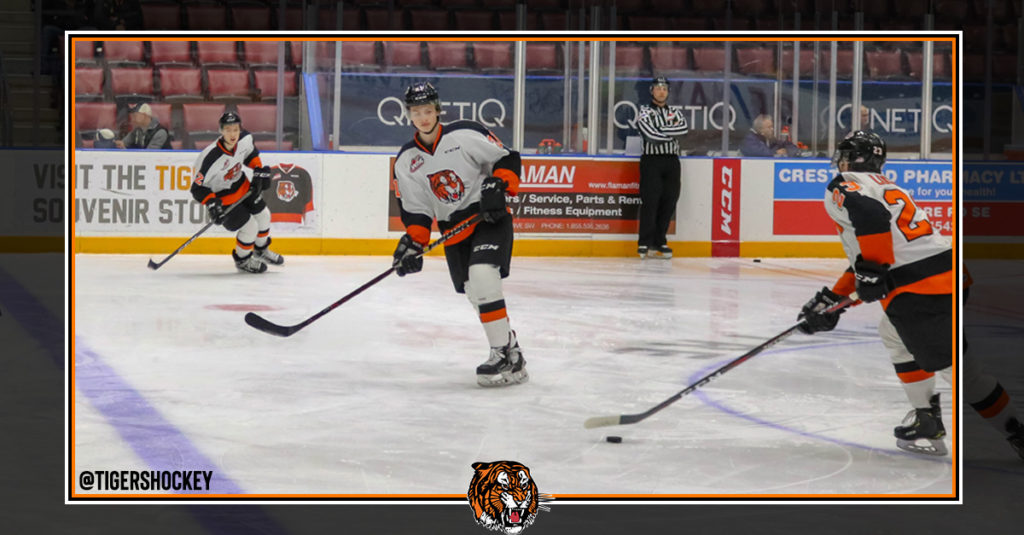 Brett Kemp made his debut in Orange and Black after joining the team at the trade deadline and fit in right away by scoring a pair of goals.

Elijah Brown opened the scoring early in the first frame by jamming in a loose puck that was fired on net by Trevor Longo. Brown’s goal was his 7th of the season.

Late in the frame, Pats’ forward Riley Krane scored to send both teams to the dressing room tied 1-1 after 20 minutes of play.

In the second period, Brown brought the puck in and passed it to Bryan Lockner who fed it across the ice to Kemp to score his first of the night.

Less than five minutes later, Kemp cleaned up a rebound to score his 24th goal of the season extending the Tigers’ lead to 3-1. Kemp’s second goal of the night was assisted by Corson Hopwo and Bryan Lockner.

Midway through the period, Pats’ veteran forward Sebastian Streu scored to cut the Tigers’ lead to 1.

Shortly after, Cole Clayton fired a shot in through traffic from the point to make it 4-2. Clayton’s 3rd goal of the season was assisted by Longo and Hopwo.

With seven seconds left in the second stanza, Tyler Preziuso and Ryan Jevne set up Linus Nässén to score on the power play. Nässén’s goal was his 5th of the season.

Play was coast to coast in the final frame but neither team were able to score and the game ended 5-2 for the home team.