TIGERS UNABLE TO CLIMB BACK INTO GAME 3 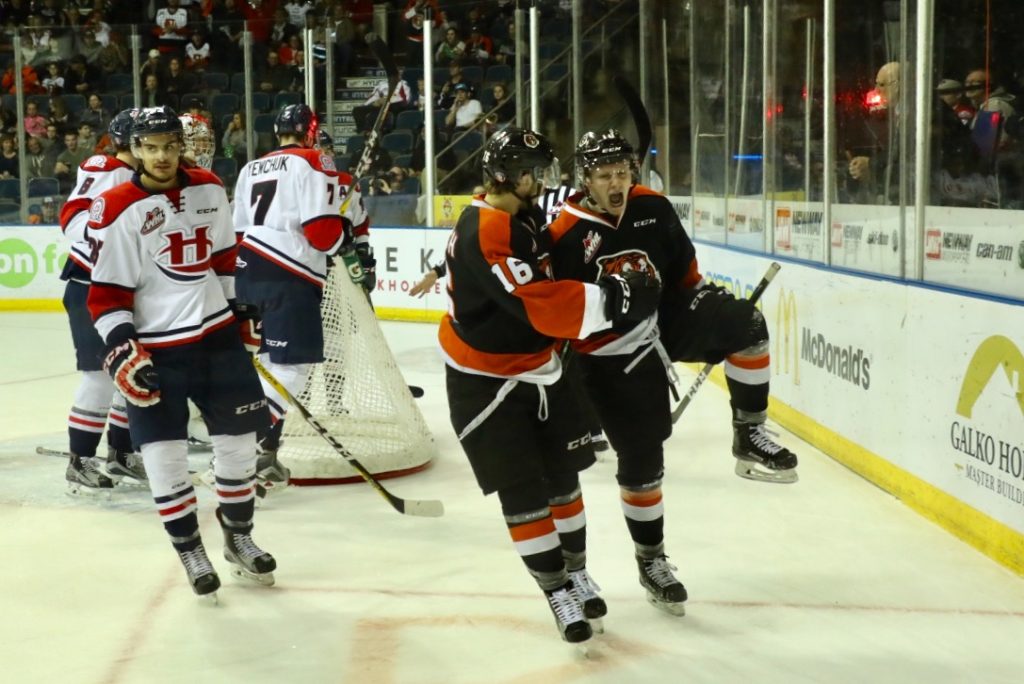 Lethbridge, AB — Tuesday night was a crucial game for the Medicine Hat Tigers and Lethbridge Hurricanes. Game 3 is normally the ‘momentum’ game as it means you now control your own fate and can put your opponent on the brink of elimination with one more victory. The Tigers needed to force at least a split in their games down Highway 3 in order to force Game 6 Sunday night.

The Tigers broke the seal in the opening period. James Hamblin buried his 2nd of the playoffs, controversial nonetheless as he seemed to have directed the puck in with his skate. After an argument from the Canes and a video review, the goal did stand and a 1-0 lead. Michael Bullion was great in net for the Tigers keeping the loud and electric Hurricanes fans out of the game. The Canes would get their chances however and threw 9 shots at Bullion but couldn’t solve the scoreboard as the Tigers took a 1-0 lead into the break.

With the Tigers momentum into the second period they continued to press. Stuart Skinner was tested to the max. Mason Shaw, John Dahlstrom and Matt Bradley was Medicine Hat’s best line through two periods. But it was Mark Rassell and Hamblin who would connect for the game’s second goal just under 9 minutes into the second period. Hamblin won the puck back to the point where Rassell was standing. A quick move by the Calgary born native and a hesitation wrist shot found it’s way past Skinner for a 2-0 lead. Lethbridge would get on the board not too long after with Jordy Bellerive netting his 3rd of the playoffs and cutting into the lead. A Tigers penalty late led to a red hot Giorgio Estephan scoring his 6th and tying the game at 2 heading to the third.

It was a tough period for the Tigers as fatigue looked to kick in and the Canes fed off their loud fans. Lethbridge capitalized on another man advantage 4 minutes into the final frame with Tyler Wong scoring his 7th on a scramble play in front of the net. Jordan Henderson blocked a Hurricanes 3 on 1 but the puck bounced off Bullion and went just out of his reach with a driving Wong potting the loose puck and 3-2 lead. Medicine Hat pressed but just couldn’t find the bounce they needed to get the game tied. Instead Lethbridge added an insurance marker on Estephan’s second of the game. The game would stay out of reach for the Tigers as Lethbridge added an empty netter and a 5-2 defeat for the Tigers heading to the Game 4.