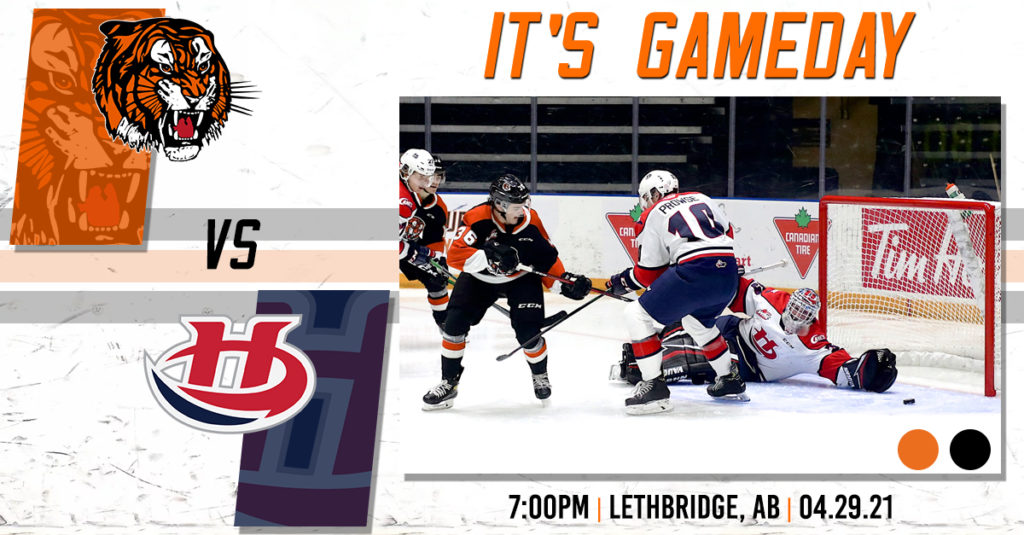 The Story Coming In
The Medicine Hat Tigers are looking to rebound, following three straight losses at the hands of the Edmonton Oil Kings, falling by scores of 3-0, 4-1 and 3-2. Washington Capitals Draft Pick Garin Bjorklund stopped 123 of the 133 shots fired his way by the high powered Oil Kings. Offensively the Tabbies were led by by overage defenceman Cole Clayton who had 1 Goal and 2 Assists, while Brett Kemp had two helpers.

The Lethbridge Hurricanes were pummeled 6-3 and 7-2 by the Calgary Hitmen in the first two meetings of this three game set, while the ‘Canes came out victorious in the final game of the series, beating the Hitmen 4-1. Logan Barlage and Alex Cotton led the charge for Lethbridge, each  registering two goals and two assists in the series. Carl Tetachuk got the nod for game one, but was pulled after surrendering four goals on 12 shots in the opening 10:52 of the affair. Rookie netminder Jared Picklyk came in in relief stopping 22 of 23 shots. It would be Picklyk that got chased in game two, after giving up 5 goals through two periods of play. Tetachuk bounced back in the final game of the series stopping 40 of 41 shots.

Tigers vs. Hurricanes
This will be the fourth meeting of the season between these two bitter rivals, with Medicine Hat taking the first three games of the season. The Tigers are 8-1-0-0 vs the Hurricanes in the last two seasons and hold the slight edge over 5 years with a record of 14-12-0-0. The Tigers currently sit second in the Central Division with 25 points, while the Hurricanes are in 4th with 18 points. The Tigers Powerplay is still well north of 40% this season sitting currently at 42.6% which is good enough for 1st in the WHL. The Hurricanes Powerplay is 27 of 94 (28.7%), while their Penalty Kill sits at 77.5%.

View from Lethbridge
The Lethbridge Hurricanes will be looking to build off the momentum they generated in their 4-1 win over the Calgary Hitmen. Justin Hall leads the Hurricanes in scoring with 26 points (12G, 14A), with Alex Cotton right on his tail with 24 points (7G, 17A). Veteran Logan Barlage is third in team scoring with seven goals and 12 helpers. Between the pipes Carl Tetachuk is currently sporting a 4.14 GAA and a 0.875 SV%, while Taber, AB product Bryan Thomson has a 4.75 GAA and a 0.867 SV%.

Tigers Talent
Medicine Hat Tigers overage defenceman and Alternate Captain Cole Clayton leads all WHL defencemen in scoring with 28 (8G, 20A) points through 19 games. The Strathmore, AB product has been a rock defensively, as well as being a Powerplay QB with 18 of his 28 points coming on the man advantage. The 6’2″ right shot D man has taken major steps this season and is only two points shy of besting his career mark of 30 points…in 44 less games.

Captain’s Corner
Returning to the Tigers for his overage season is first year Captain, Ryan Chyzowski. Chyzowski, a former 1st round bantam draft pick has played his entire career for the Tigers appearing in 276 regular season games for the Orange and Black. The Kamloops, BC native is third in team scoring with eight goals and 15 assists through 19 games this season. Chyzowski crushed his career best totals in 2019-2020, notching 34 goals and adding in 35 helpers for 69 points. Chyzowski is a great 200 foot player with a very quick release and a great work ethic.