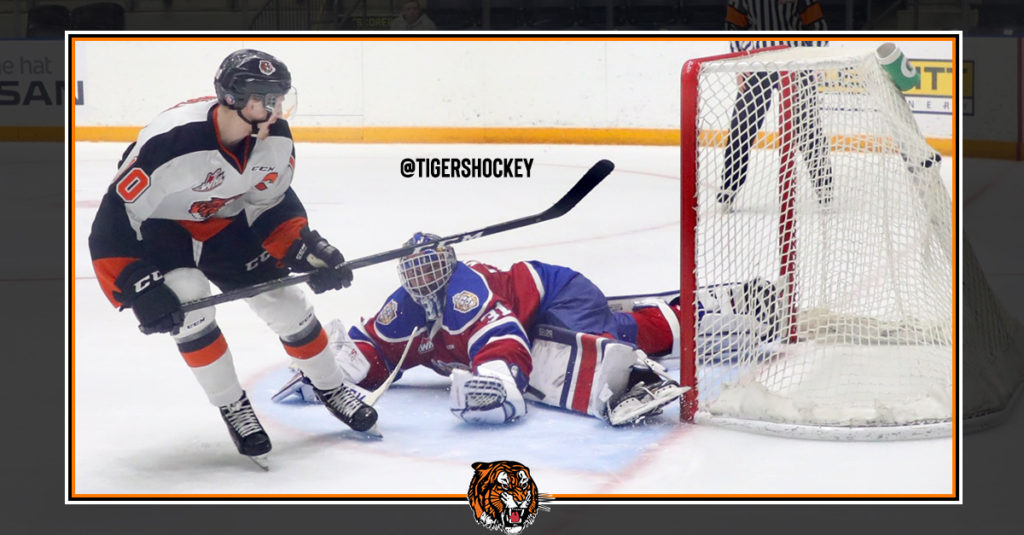 Medicine Hat, AB — The Medicine Hat Tigers defeated the Edmonton Oil Kings in a come from behind 4-3 shootout victory.

Ryan Chyzowski returned to action after suffering a laceration earlier this month and he scored the game-tying goal with 34.3 seconds left in regulation to send the game into extra time.

Captain James Hamblin was the first shooter in the shootout and the only one to score. Hamblin had a two-point game adding a pair of assists and bringing his career total to 98 assists.

Midway through the frame, Hamblin combined with Joel Craven to set up Corson Hopwo. Hopwo’s goal was his second of the season.

With 3 seconds left to play in the opening period Oil Kings’ Wyatt McLeod scored to regain the lead for the visitors.

Late in the second stanza, Søgaard left the game after being involved in a collision. He made 20 saves on 22 shots faced before Jordan Hollett relieved him.

Ryan Jevne opened the scoring in the final frame by firing a shot in through traffic. Jevne’s 21st goal of the season was assisted by Linus Nässén and Logan Christensen.

Oil Kings’ forward Josh Williams scored on the power play to regain the lead midway through the period before Chyzowski scored his game-tying goal with 34.3 seconds left to send the game to extra time. Chyzowski’s 15th goal of the season was assisted by Nässén and Hamblin.

Hollett stopped 12 of 13 shots faced in relief of Søgaard while Oil Kings’ Dylan Myskiw made 25 saves on 28 shots faced.

The Tigers are now 24-16-2-2 and will play a home and home series against the Swift Current Broncos this weekend. Friday the Tabbies will travel East to the Innovation Credit Union i-plex and the game will start at 6 PM MT. Saturday’s game will start at 7:30 PM at the Canalta Centre.