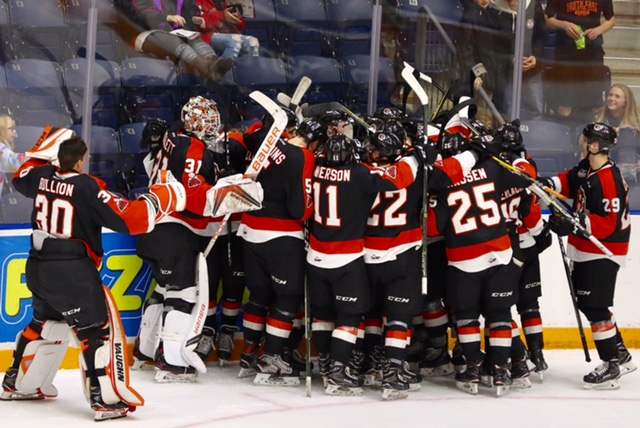 The Medicine Hat Tigers needed all hands on deck in Saturday’s 4-3 overtime victory over the Seattle Thunderbirds.

It took contributions from everyone in the active lineup to send the reigning Western Hockey League champions home with a single point, including key efforts from both goaltenders.

Starter Michael Bullion had his night cut short late in the second period after taking a heavy hit from Seattle’s Cade McNelly. After opting to leave his crease and attack a loose puck, the Hat netminder was bowled over by the 6-foot-2, 178-pound McNelly and was forced to leave the game. He made 20 stops on 21 shots.

Thankfully for the Tigers, Jordan Hollett was ready for the call. The 18-year-old Langley product entered with a 2-1 lead and stopped 13 of the 15 shots he faced before Mark Rassell stepped up in overtime to push the Tigers to 10-6-0-0.

Ryan Chyzowski kicked off the scoring for Medicine Hat in an evenly matched opening period. The sophomore centre buried a rebound in front to send his team into the break with a narrow lead despite being outshot 9-7 in the frame.

Newly acquired Tigers forward Hayden Ostir kept the momentum in Medicine Hat’s favour with an opportunistic goal early in the second. Rassell put the puck on Seattle goaltender Liam Hughes and Ostir was waiting on the doorstep for his fifth of the year.

The Thunderbirds responded with a flurry of opportunities and Bullion quickly had his reflexes put to the test. The 20-year-old Alaska product pulled a puck off the line at the tail end of a goalmouth scramble to preserve Medicine Hat’s two-goal lead in highlight reel fashion. While the play went to a review, it was determined Bullion did in fact cover the puck before it crossed the goal line — earning an ovation from the 3,182 in attendance.

But Blake Bargar put an end to Bullion’s bid for a clean sheet a few minutes later. The Thunderbirds winger broke in on an odd-man rush and opted to shoot, beating Bullion high to cut Medicine Hat’s lead in half just a few minutes before the Tiger goaltender was forced out of the game.

Rassell re-established some breathing room midway through the third by finishing off a cross-crease feed from Ostir for his team-leading 13th of the year, but it was quickly answered in kind.

While Tigers defenceman Cam MacPhee managed to knock a bouncing puck off the line, Thunderbirds captain Turner Ottenbreit quickly ripped the rebound past a sprawled out Hollett to cut Medicine Hat’s lead back to one.

Seattle continued to push for an equalizer and Ottenbreit broke through again to force overtime, but Rassell stepped up to play the hero for Medicine Hat — beating Hughes 11 seconds into the extra period on a feed from James Hamblin.

Hughes held the Thunderbirds in the contest with 23 saves, but ultimately settled for the loss — dropping Seattle to 9-5-1-1 on the year.

The Tigers hit the road to Calgary Friday for their first meeting with the Hitmen before returning to the Canalta Centre Saturday to close out a home-and-home set.