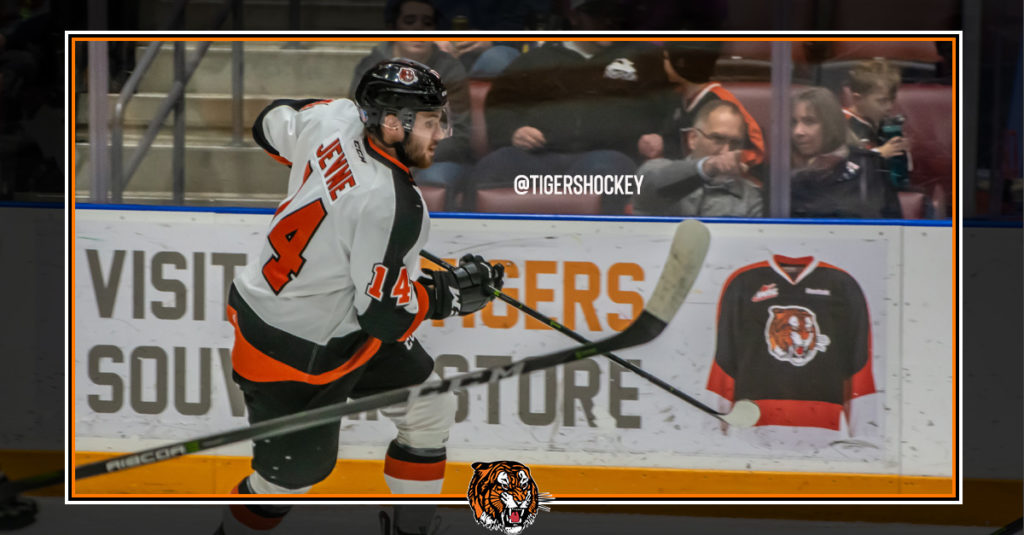 Medicine Hat, AB — The Medicine Hat Tigers won their fourth straight game by holding on to beat the Vancouver Giants 4-3.

Goaltender Jordan Hollett played in his 100th career WHL game and stopped 29 of 32 shots to help lead the Tabbies to victory.

Captain James Hamblin opened the scoring after Corson Hopwo fed him the puck in the slot. Hamblin then slipped it past Vancouver netminder David Tendeck to score his first of the night. Tyler Preziuso also assisted on the play.

Early into the second stanza, the Giants scored 22 seconds apart to take the lead 2-1. Davis Koch and Justin Sourdiff were the goal scorers for Vancouver.

Later on in the period, the Tabbies responded with a pair of quick goals 33 seconds apart to regain the lead.

Baxter Anderson started the comeback when he pressured a Giants’ defenceman who dropped the puck. Jaxon Steele pounced on it and passed it to Hamblin whose backhand shot beat Tendeck to tie it up. Hamblin’s 2nd goal of the night was his 23rd of the season.

Shortly after Hamblin’s second goal, on a play from Dylan MacPherson, Daniel Baker passed the puck cross-ice to Elijah Brown who did not hesitate to fire the puck into the net. Brown’s goal was his 6th of the season.

Midway through the final frame on the power play, Linus Nässén set up Hamblin whose slap shot was redirected by Hayden Ostir into the net to make it 4-2 for the Tigers. Ostir’s goal was his 8th of the season.

The Giants continued to push for a comeback and rookie forward Lukas Svejkovsky scored to make it 4-3 but the Giants were not able to get another one past Hollett.

The Orange and Black are now 21-15-1-2 and will host the Kootenay ICE on Friday night at the Canalta Centre. The game starts at 7:30 PM and the Gas City Roller Derby Association will be in the Hut 8 Mining Community Corner.