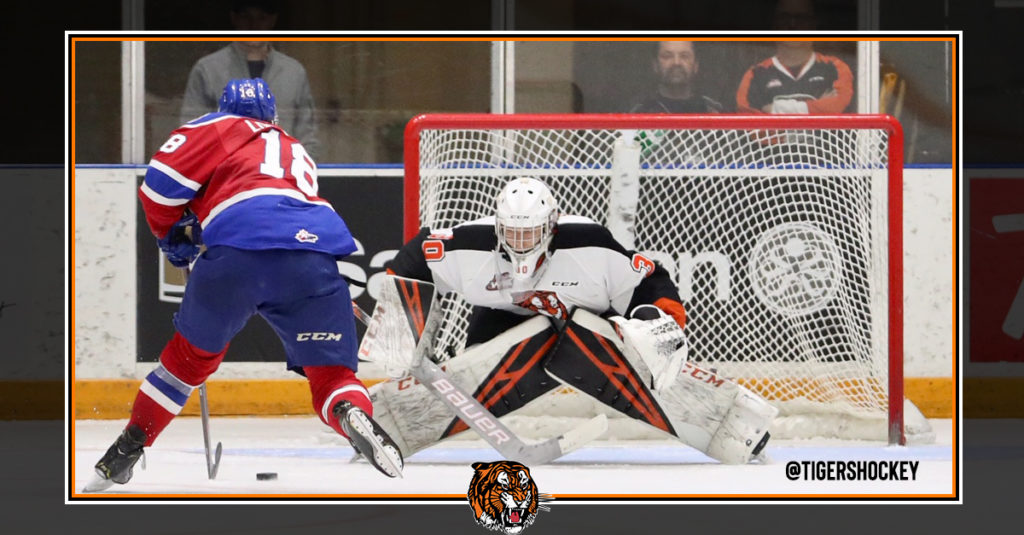 Rookie goaltender Mads Søgaard turned aside all 32 shots faced to earn his first shutout of the post season. The Tigers had five different goal scorers, including affiliate player Cole Sillinger.

Sillinger struck first late in the opening frame by beating Edmonton goaltender Dylan Myskiw glove side. Sillinger’s first WHL goal was assisted by Logan Christensen and Linus Nassen. The Orange and Black headed to the dressing room leading 1-0 after 20 minutes of play.

Midway through the second stanza while the Tigers were on the penalty kill, Tyler Preziuso won possession of the puck and passed it to James Hamblin. Hamblin made a move to beat his defender before scoring with his backhand. Hamblin’s shorthanded goal was his second of the series.

Shortly after Hamblin’s goal, Elijah Brown drove to the net and managed to get the puck past Myskiw. Brown’s goal was assisted by Eric Van Impe.

Early into the final frame, Nassen set Ryan Chyzowski up to score his first goal of the playoffs. After Chyzowski’s goal, Myskiw left the game and he was replaced by Todd Scott. Myskiw stopped 19 of 23 shots faced in 41:55.

Christensen set Hayden Ostir up to score his first of the night midway through the frame. The Tabbies won 5-0 and they now lead the series 2-1.

The Orange and Black will host the Oil Kings Wednesday night for game four of the series. The puck will drop at 7 PM at the Canalta Centre.