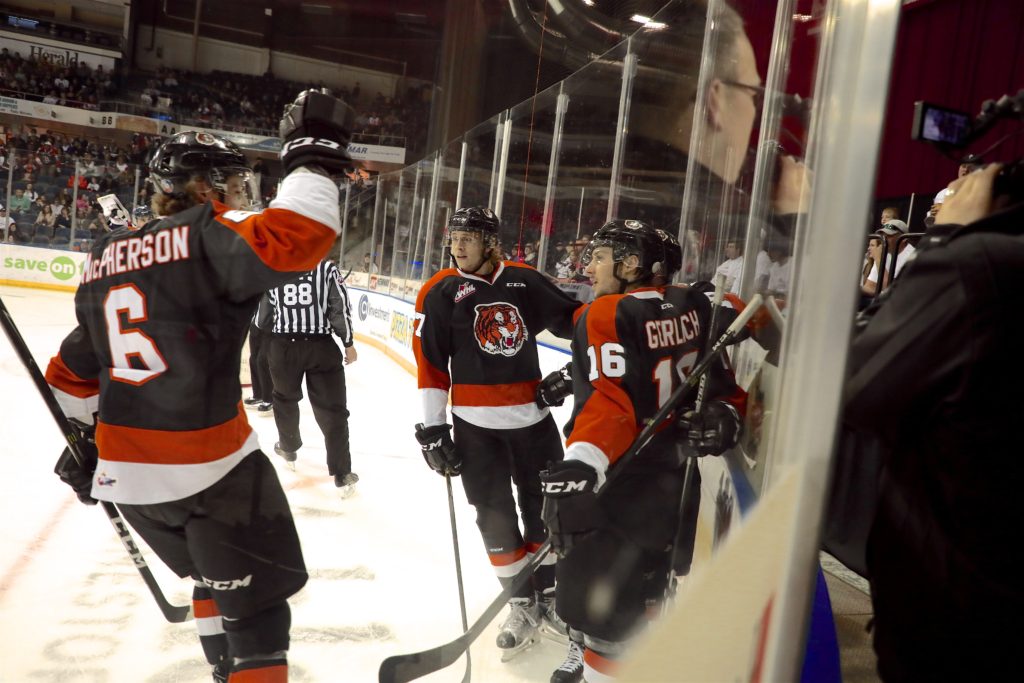 Lethbridge, AB — The Medicine Hat Tigers finally got a chance to showcase their reputation as the Western Hockey League’s comeback kids on Wednesday night at the Enmax Centre.

Chad Butcher and Max Gerlach combined to erase an early two-goal deficit before John Dahlstrom pulled the rug out in overtime to seal a 3-2 victory over the Lethbridge Hurricanes and even the Eastern Conference semifinals at two games apiece.

The Tabbies got everything they wanted out of their start, except the opening goal. After shelling Hurricanes goaltender Stuart Skinner with 11 shots in the early going, Lethbridge’s Giorgio Estephan stole away the spotlight with his fifth goal of the series.

While Medicine Hat immediately continued overwhelming the Hurricanes with some sustained pressure in the offensive zone, any momentum gained was immediately halted when Egor Babenko beat Bullion on Lethbridge’s sixth shot of the game — a floater on the glove side.

Despite out-shooting Lethbridge 17-7 through the frame, the Tigers entered an intermission in a deficit for the first time in the post-season.

The second period featured much of the same, with Medicine Hat occupying the Lethbridge end and filtering a high number of shots on Skinner — but this time the Tigers found a way through.

After nearly 38 minutes of unrelenting pressure, a lucky bounce gave Medicine Hat the opening they needed. Chad Butcher was standing at the top of the crease when a loose puck came rolling onto his stick, and the Tigers overager made no mistake by depositing his third of the post-season into the open cage.

Staring down the looming threat of a 3-1 series deficit, the Tigers dug deep and responded with one of their strongest periods of the playoffs.

Medicine Hat’s leaders were at their best, with Butcher and Steven Owre both generating chances before drawing a pair of penalties to push the Tigers to a pivotal 5-on-3. With just one second remaining in the man advantage, Gerlach silenced the crowd with his second of the post-season and set the stage for Dahlstrom’s overtime magic.

Bullion settled into his crease after the shaky start, stopping the next 24 shots for a total of 28 while his team battled back into the contest, and the series.

Skinner finished the outing with 56 saves for Lethbridge, but ultimately settled for his second loss of the series.