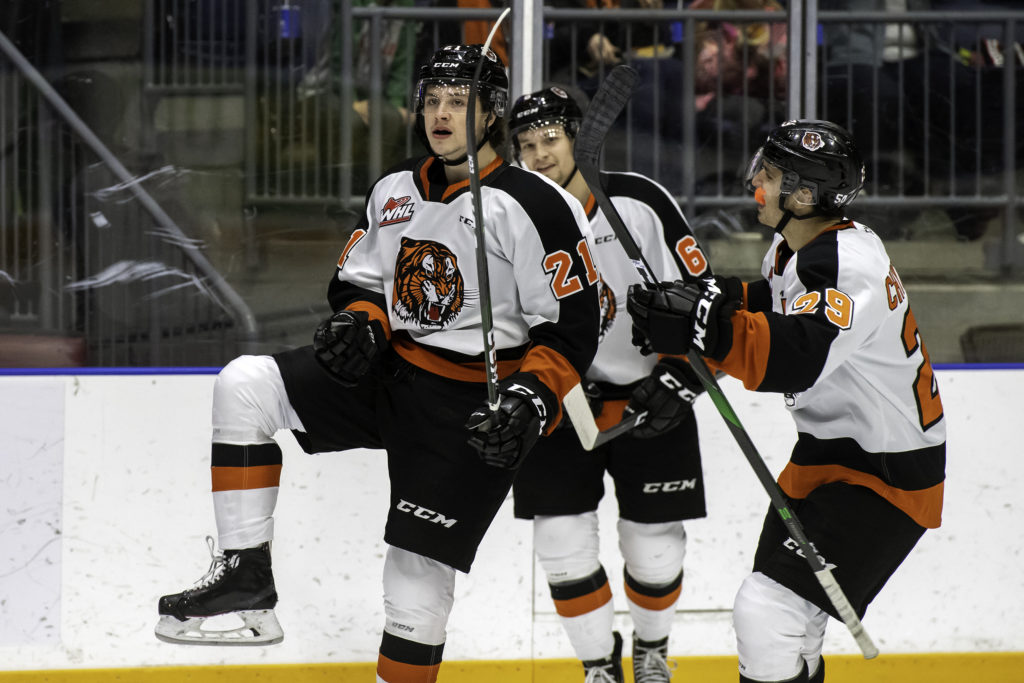 Medicine Hat, AB — The Medicine Hat Tigers defeated the Seattle Thunderbirds 8-5 in their lone meeting of the 2019-20 season.

After a wild first period where five goals were scored in the course of three and a half minutes, the Tigers dug in and found a way to win. Veteran defenceman Parker Gavlas suited up for his 100th career WHL game in the contest and picked up an assist while Brett Kemp lead the way with a four point (2G, 2A) performance. Captain James Hamblin also had a pair of goals in the contest.

Kemp opened the scoring on on a wrap around to give the home team an early lead just over a minute into the game. His first goal of the night was assisted by Ryan Chyzowski and Garin Bjorklund.

Late in the period, Nick McCarry collected a loose puck in the offensive zone and quickly played it to Kemp at the side of the net. Kemp played the puck back to McCarry who then scored his sixth goal of the season making 2-0 for the Tabbies.

Quickly afterwards, the Thunderbirds responded with a pair of goals twenty-three seconds apart to tie the game up 2-2. Veteran import forward Andrej Kukuca scored both goals for the Thunderbirds.

Seven seconds later off the faceoff, Daniel Baker played the puck ahead to Hamblin who skated it in and beat Thunderbirds’ goaltender Blake Lyda glove side to score his first goal of the night.

Thunderbirds forward Henrik Rybinski broke the stalemate just over two minutes into the second stanza but the Tabbies added a pair of goals midway through that period to regain the lead.

While the Tigers were on their first power play of the night, Lukas Svejkovsky tipped Dylan Plouffe’s point shot to score his 18th of the season and tie the game up 4-4.

To take the lead, Chyzowski combined with Kemp who beat Lyda with a backhand shot to score his 18th of the season. The Orange and Black headed to the dressing room leading 5-4 at the end of the second period.

Twelve seconds into the final frame, Hamblin scored his second of the night and 23rd of the season shorthanded on a play from Gavlas.

Late in the period, Plouffe scored from the point on a play from Cole Clayton and Corson Hopwo.

Shortly after Plouffe’s goal, Kemp collected the puck off a faceoff and dished it to Cole Sillinger who beat Lyda glove side to score his 13th goal of the season.

A minute later, Kukuca scored his third of the night but the Tabbies held on to win 8-5.

Medicine Hat is now 25-11-1-1 and they will depart for a Manitoba road trip this week. On Tuesday, the Tigers will take on the Brandon Wheat Kings before stopping in Winnipeg to battle the ICE on Wednesday. After their two game road trip, the Orange and Black will play a home and home series against the Moose Jaw Warriors that will kick off Friday night in Medicine Hat. Tickets for Friday’s game can be purchased in person at the Canalta Centre Box Office or online.