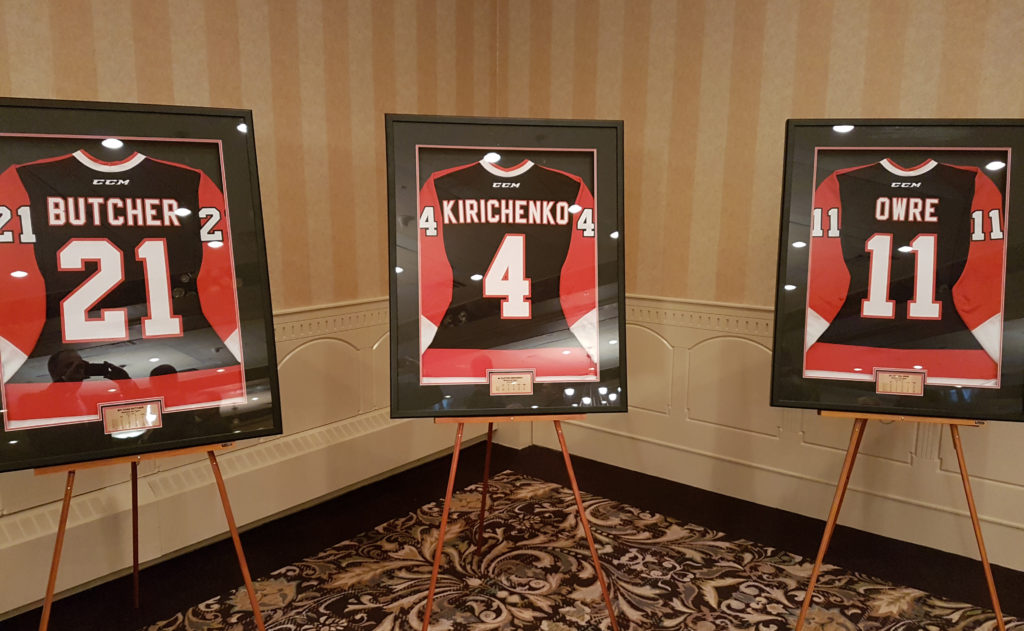 Medicine Hat, AB — The Medicine Hat Tigers had a historic season, capturing the Central Division for the first time in 10 years and 50+ wins for just the 4th time in franchise history. On Thursday night the season came to an official close as the Tigers handed out their hardware at the annual Awards Banquet hosted by the Medicine Hat Lodge.

The night consisted of bringing sponsors, parents, billets, game day staff, Hockey Hounds members and many others together one last time before everyone goes their separate ways for the summer break.

It was a bitter sweet event for career Tigers Steven Owre and Chad Butcher. The duo spent 5 seasons with the orange and black and wrapped up their careers with new offensive highs in almost every category. Butcher eclipsed the 100 point plateau for the first time in his career and lead the Tigers in scoring in back to back seasons. Owre recorded a career best 88 points on his way to a healthy campaign. Fellow overager Clayton Kirichenko only spent a season and a half with the Tabbies but his dedication to the game of hockey and his teammates made a huge impact in his time in the Gas City.  The trio were showered with praise for their long standing careers in the league, with the hardest part saying goodbye to teammates and lifelong friends.

The awards began with a pair of awards already decided when the puck dropped on the WHL Playoffs; the Most Goals award and Leading Scorer awards.  The winners were Mark Rassell who scored a team high 36 goals during the year and Chad Butcher who led the team with 103 points.

The most anticipated award of the night for any sports team is the Most Valuable Player and this season the Tigers decided to choose just one player for the award. Leading scorer Chad Butcher won his second consecutive MVP award. Last season Butcher shared the award with Nick Schneider and Ty Stanton. Butcher was relied upon to lead a incredibly deep offensive core. He shone with his precision passing and leadership. Butcher was always looked upon to score big goals or make the big play when needed, making it an easy choice to be MVP’s for this season.

Take a look at the other award winners from Thursday’s banquet:

Sponsored by MY 96 FM

Scholastic Player of the Year

The Tigers would like to congratulate the award winners and to the 23 young men who suited up for the orange black giving fans a great year of fast paced and exciting hockey at the Canalta Centre!