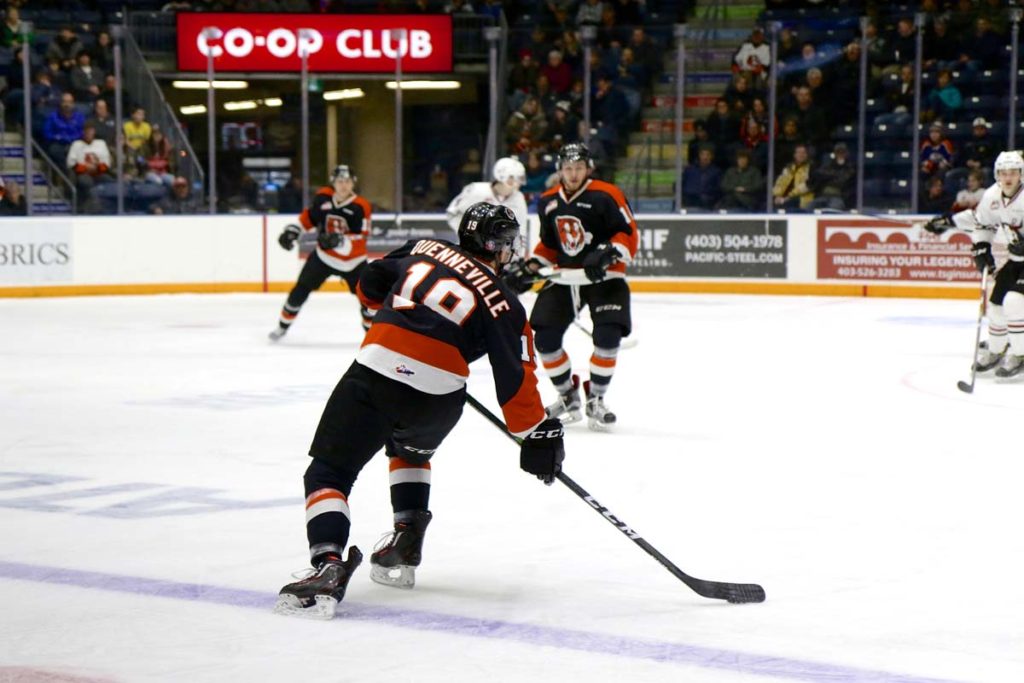 Medicine Hat, AB — The Red Deer Rebels worked fast to ensure the Medicine Hat Tigers couldn’t dig in their claws for another third-period comeback Tuesday night at the Canalta Centre.

Brandon Hagel, Austin Glover, Evan Polei and Michael Spacek all scored on just seven shots in the third to cap off a revolving door evening for Medicine Hat’s goaltending with an 8-3 blowout.

The four goals came across just seven shots to open the final frame, driving a dagger into Medicine Hat’s hope at another comeback victory while sending Nick Schneider back to the bench after entering the game in relief to start the third.

Tigers forward Matt Bradley opened the scoring with his 34th of the season, tying Mark Rassell for the team lead in goals to leave Red Deer on their heels after 20 minutes, but the rough-and-tumble Rebels had an answer in the second.

It took a penalty shot for the Rebels to finally break through on Bullion, but it certainly opened the floodgates for the rest of the evening. While Bullion made the initial stop on Lane Zablocki’s shorthanded breakaway, Bradley was called for an infraction on the play and the Rebels found their opening.

Zach Fischer almost immediately answered the bell by ripping a shot past Rebels goaltender Lasse Petersen for his own 34th of the year, but the lead was once again short-lived.

Red Deer’s Brandon Hagel finished off a freebie after a Jared Freadrich shot squeaked through Bullion’s pads and onto the blue ice, and Medicine Hat’s early impetus seemed to vanish from the ice.

The Tigers looked to get a jump on things late in the second period when defenceman David Quenneville took a slash on the hands from Freadrich while breaking in alone on goal, but the Tigers found no retribution on the play — and the Rebels stole away the momentum just a few seconds later on a gritty goal from Jordan Roy.

The Rebel winger cashed in after a determined net-front effort, batting home a loose puck after Bullion lost sight of a rebound in the crease. The goal was Red Deer’s third on just nine shots in the middle frame, and ultimately resulted in Nick Schneider entering for Bullion to start the third — but that didn’t solve much. Schneider was beaten four times on just seven shots to start the final period and was promptly pulled from the crease, bringing Bullion back into the game after sitting for just nine minutes.

Bullion stopped 12 of 15 through the first two periods, then was beaten by Roy on his first shot in the third to effectively end Medicine Hat’s night early.

Max Gerlach added a consolation marker in the third, his 33rd of the year.

Petersen was at the top of his game for Red Deer, tallying a total of 37 saves on the night to push the Rebels to 29-28-8-4 on the season while extending their point-streak to six games.

The Tigers will continue the chase for 100 points on the season Friday in Lethbridge against the Hurricanes in the start of a season-ending home-and-home series.