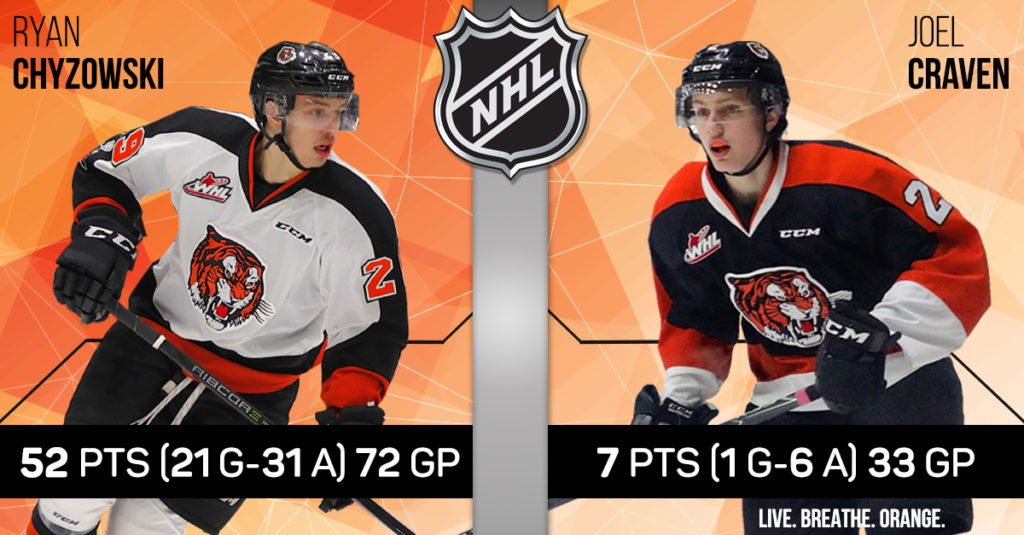 The fitness testing camp was not publicly advertised but it was an opportunity for players who were not invited to the NHL Scouting Combine to be introduced to the Maple Leafs Organization.

“When invited to the camp it felt great to be a player they are interested in,” said Craven.

Both Chyzowski and Craven are eligible to be drafted during the NHL Draft June 22nd to 23rd along with 14 other Tigers teammates.

“It was pretty exciting getting invited to the camp as it was my first little taste of the NHL and all the other kids that I would be up against,” said Chyzowski.

There were players from all over North America and some from Europe who participated.

“When I went to the camp I had no idea what to expect but I later realized it was like the Tigers Orientation Camps I would go to when I was a Tigers Prospect,” said Craven.

Craven and Chyzowski had the opportunity to see the Maple Leafs’ facilities and meet all of their coaches and staff while being testing on and off the ice.

“The camp itself was very short only being about a day and a half but we got exposed to the type of movement testing off-ice and a unique skills testing on-ice,” said Chyzowski.

Both players were happy with how they performed during the camp and learned a lot from the experience including technical defencemen based skills for Craven and tips and advice to help create better habits as a hockey player.

Although the NHL draft is next weekend, both players’ focus has returned to preparing themselves for next season with the Tigers.