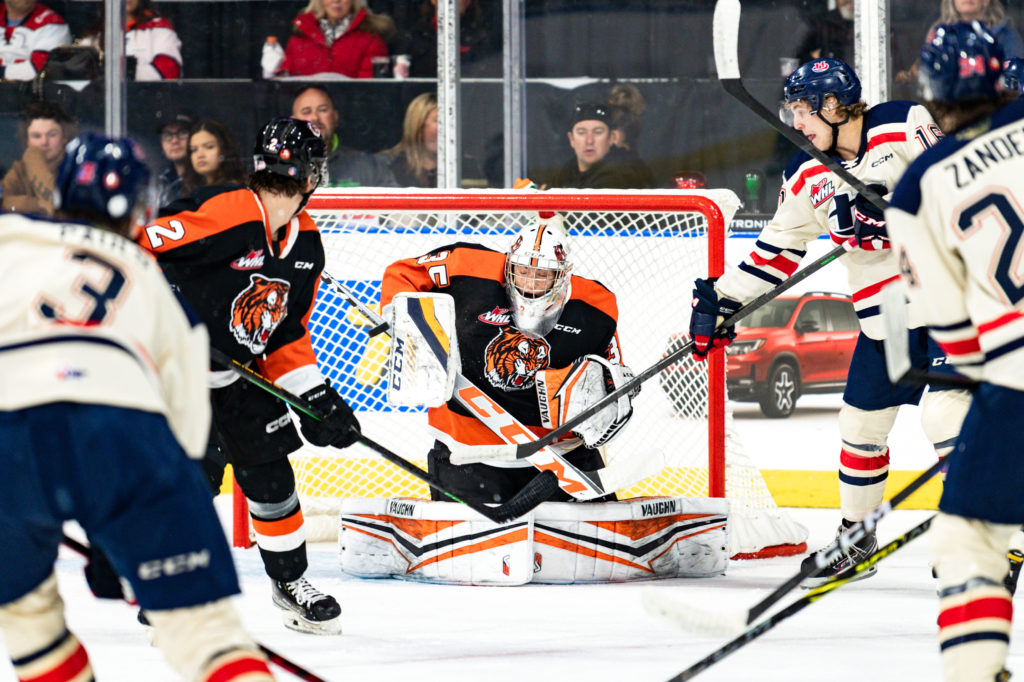 Lethbridge, AB – The Medicine Hat Tigers opened the scoring in a back and fourth affair with their Central Division Rivals the Lethbridge Hurricanes but when it was all said and done it would be the Hurricanes in their home opener besting the Tigers 5-4 in regulation.

The Tigers would get off to a great start thanks to Brenden Lee’s (Seattle, WA) 2nd straight game with a goal on the power play to give Medicine Hat their only lead of the game thanks to Bogdan Hodass (Jelgava, Latvia) & Alex Drover (Port-aux Basques, NL) on the passing play just 1:44 into the game. Lethbridge would respond thanks to Jett Jones’ 1st goal of the season at 8:24 , but in the final two minutes saw the Hurricanes take the lead thanks to a Noah Chadwick blast from the point on the power play at 18:58, followed by a Andrew Basha (Calgary, AB) bat out of the air with 11.4 seconds left in the period to notch things all up at 2-2.

Off to the 2nd frame where it would be a stalemate between the two clubs before Nolan Bentham would score the only goal of the period at 13:44 to give Lethbridge the lead at 3-2.

Penalty trouble at the end of the 2nd period spilled into the third where the Hurricanes would take a two goal lead thanks to a Cole Shepard tap in at the side of the Tiger net to make it 4-2 just 40 seconds into the period. Lethbridge wasn’t done yet at 5:09 Jett Jones scored his second of the night to up the Lethbridge lead to 5-2.

Despite plenty of opportunities on the man advantage after with a pair of 5 on 3’s, it just wouldn’t be enough for the roadside to make the comeback after Oasiz Wiesblatt (Calgary, AB) scored his 3rd of the season and the 2nd PPG on the night for Medicine Hat, a late pull of the goalie and a Tyler MacKenzie (Red Deer, AB) with 31 seconds left wouldn’t give the Orange and Black at least a shot at overtime.

Medicine Hat ended up out-shooting the Hurricanes 34-27 and both squads ended up being 2/6 on the power play to conclude the night. Beckett Langkow made 22 saves in the loss.

Next up for the Tigers, the top ranked team in the CHL, the Winnipeg Ice at home for the 1st time in this early installment of the 2022-23 WHL Season. Get your tickets here or if you can’t make it, the voice of the Tigers CHAT 94.5 will have all coverage starting with the pre-game show at 6:30.