VEY AND BARKER LOOK TO MAKE IMPACT FOR OLYMPICS 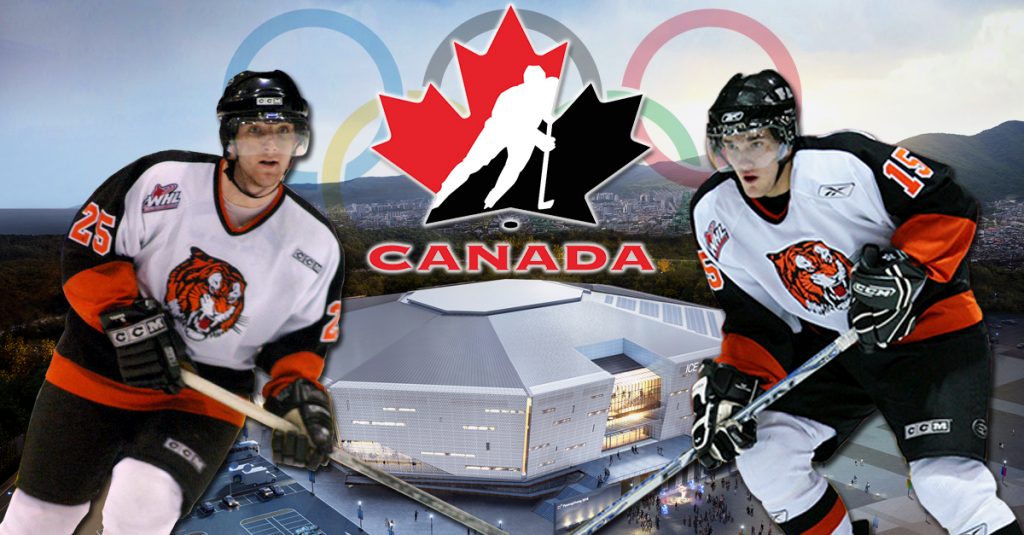 Medicine Hat, AB — Team Canada has named its roster for the 2017 Sochi Open and the Tournament of Nikolai Puchkov which both take place in August and two former Tigers will be watched closely to vie for a spot on the Olympic Roster. Cam Barker and Linden Vey, who both play in the KHL have made the pre-Olympic rosters. Vey just recently signed a contract this off season to head to the KHL, while Barker has been in the league for 4 seasons.

Barker played 4 seasons with the Tigers from 2002-03 to 2005-06. His most memorable season was in 2003-04 when he was part of the team that captured the WHL Championship. That year Cam recorded 65 points in 69 games and was then taken 3rd overall in the NHL Entry Draft by the Chicago Blackhawks.

Vey was also a 4 year Tiger breaking into the league full time in 2007-08. Vey put up impressive numbers over his career after his rookie season. Linden was a point per game player in 08-09 and 09-10 but it was his final WHL season where his offense took over. Vey led the entire Canadian Hockey League in scoring with 116 points in 69 games and added another 25 points in 15 playoff games. Vey was awarded the CHL and WHL Top scorer awards.

The Sochi Open, which will take place from Aug. 6-9 in Russia, will mark the first pre-Olympic action for Team Canada as general manager Sean Burke looks to form his roster for the 2018 Pyeongchang Games.

Canada will also play in the Tournament of Nikolai Puchkov in St. Petersburg later in August, with a different roster which was also released Tuesday. Both rosters are made up almost entirely of players currently skating in Europe.

“We’re going to play these two events in August, hopefully find out a lot of things that we have. But we’re going to have to also find out some of the things we don’t have,” said Burke.

“Any player that’s eligible, whether he’s playing in North America on an AHL contract or in college, junior, we don’t want to leave any stones unturned.”

Among the most recognizable names on the Sochi Open roster are former NHLers Rob Klinkhammer, Brandon Kozun, Daniel Paille, Mason Raymond, Max Talbot and Linden Vey. Former Carolina Hurricanes goaltender Justin Peters will dress for the tournament, along with Kevin Poulin, who was named to both rosters.

Kevin Klein, who retired from the New York Rangers earlier this month and then signed in Switzerland, is also on the tournament for Aug. 14-17 Tournament of Nikolai Puchkov.

Below are the full rosters for both tournaments.
2017 Sochi Hockey Open