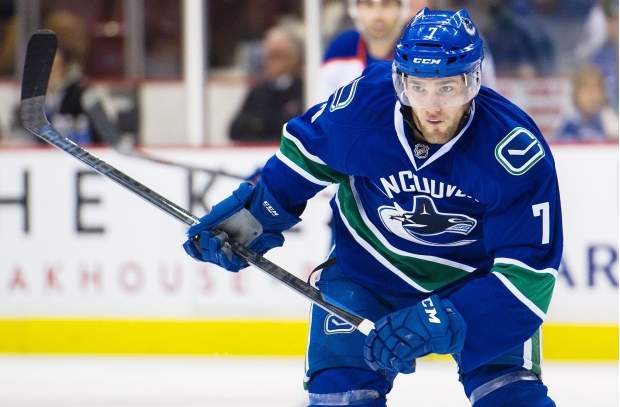 What’s past is past.

Linden Vey, a new member of the NHL’s Calgary Flames, is forging ahead to the future.

After two disappointing seasons with the Vancouver Canucks while battling with injuries and the kind of off-ice distractions that most NHL players would never even dream of, Vey has a clean slate and new beginning.

“It is a fresh start and that’s the one great thing about going to Calgary — for me, it’s turning a page in a new chapter,” says Vey, a Wakaw, Sask., native who celebrated his 25th birthday Sunday after signing with the Flames two weeks earlier.

“It’s getting everything that we’ve dealt with behind us. Just to go to a new place where I’ve got a lot of support with my brother (Shaun), and with me having played in Medicine Hat and having people close by who were very supportive during my junior career, I’m really excited and I really can’t wait for camp to start.”

Vey is doing his best to put behind him a family court case that received national attention. His father, Curtis Vey, and Angela Nicholson were found guilty last month of conspiracy to commit murder against Brigitte Vey, Linden’s mother, and Jim Taylor, Nicholson’s husband.

If that wasn’t enough of a distraction, Vey had to battle injuries last season and his family has had to overcome some other health obstacles in recent years.

Vey — who scored 46 goals and 70 assists for 116 points in his final year of junior hockey with the WHL’s Medicine Hat Tigers — had just four goals and 11 assists in 41 games with the struggling Canucks last season.

“Last year was an up and down year,” admits Vey, who had previously spent three years in the Los Angeles Kings organization. “Finally, when you start figuring it out and start playing well, that’s the way hockey goes— sometimes you get some injuries. I ended up hurting my shoulder in February and came back too soon and kind of just battled through that until the end of the year and then I finished the year with a concussion. Hockey’s one of those sports where sometimes you don’t get the breaks and sometimes you do.”

Vey, who is spending the summer training in Saskatoon, plans to recharge the batteries and get his fitness where it needs to be in hopes of a “really good year” in Calgary.

Vey has been taking part in the Driving For Prostate Golf Classic this week in Saskatoon.

His brother Shaun, who played for the University of Saskatchewan Huskies, is a cancer survivor. Their grandfather was not so fortunate.

“Any time you can be a part of something like this, I definitely want to be there, any time you have a chance give back and help support a great cause,” says Linden. “My brother had cancer and also I lost a close grandparent — my grandpa (Leo Vey) back in 2009 was taken by cancer. You ask anybody in any dressing room and everybody has a story of somebody losing somebody to cancer.”

Linden’s nephew, Harper, has had his own share of health scares. The toddler remains legally blind, but otherwise healthy, after undergoing numerous surgeries.

“I’m really confident in him,” says Desjardins, who had also coached Vey in Medicine Hat. “He’s a tremendous young man. I think he can score 40 points, for sure, in the NHL. He’s gifted and a great passer. He’s a guy who deserves a few things to go his way. Last year, he got hurt and he didn’t come out of the line-up. He tried to fight through it and it was probably a mistake. How do you hold it against a guy who tries to play through things if he wants to do it? He could have taken the easy route but he didn’t. it didn’t work out for him, but, in the end, it will work out for him.

Vey says the Flames haven’t told him much, other than he has to come in and earn his spot.

“Basically, the opportunity is there and I’m going to be given a great chance to earn some ice time and it’s really what I do from camp on,” he says.

“It’s a real hockey city. They have real passionate fans. It’s an opportunity to be closer to home and to be back in a Canadian city is something I’m really excited about.”