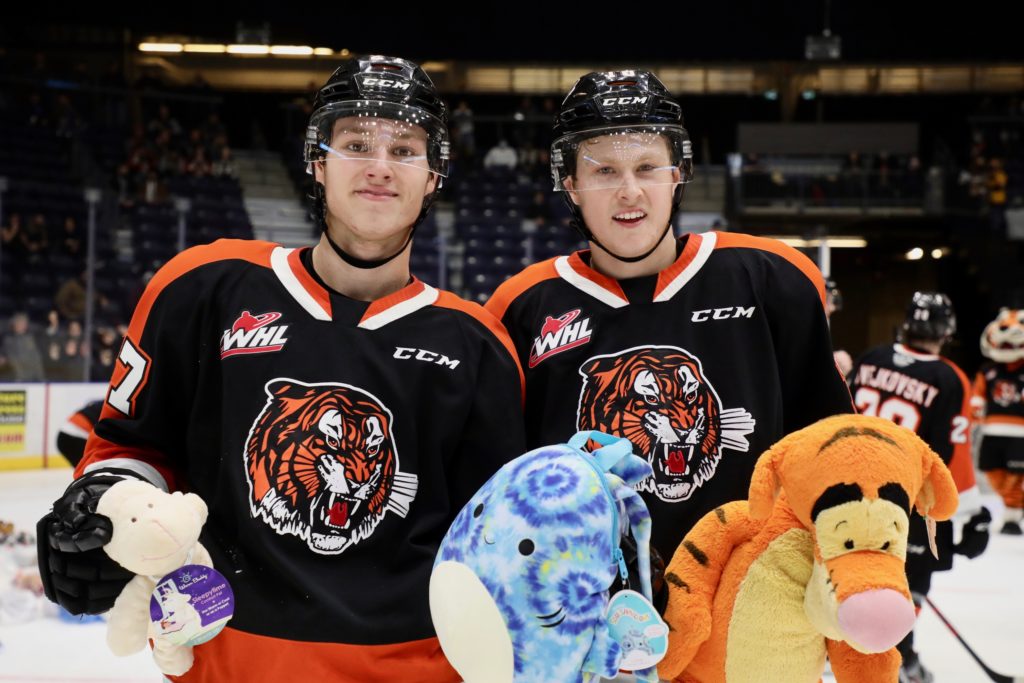 The Tigers hosted the Brandon Wheat Kings on Saturday night in their annual Teddy Bear Toss game. It was the first Teddy Bear Toss since the 2019-20 season when Brett Kemp scored the big goal. The game was the second of six meetings between the two teams this season. The Wheat Kings took the first game in Brandon 7-4 in a game that featured the first meeting between brothers – Noah and Nate Danielson.

The Tigers came out swinging in the first period and had a number of great chances. They wanted to get that early lead and to let the teddy bears rain down. Unfortunately, Wheat Kings goaltender Ethan Kruger had a strong period in net. The Tigers held the edge in shots 14 to 11 in the opening frame.

Nolan Ritchie opened the scoring in the second period with a fluky goal. He sent a pass across crease and unfortunately it went in the net off a Tigers defender. The fortunate bounce gave Ritchie his 11th of the season. Brandon would add to their lead a couple of minutes later with Chad Nychuk’s sixth. He found just enough space to tuck home a wrap around. The Tigers answered back midway through the frame. Bogdans Hodass brought the bears down with his third of the campaign. Steven Arp found Ashton Ferster with a nice drop pass that he quickly put on net. Ethan Kruger was able to make the initial save but Hodass was there to put the rebound away with a backhand shovel. Shortly after the bears were cleaned up, Nolan Ritchie struck again to reinstitute Brandon’s two goal lead.

The Tigers had a few chances on the power play early in the third to cut the lead but were unable to capitalize. They continued to battle hard throughout the period but Marcus Kallionkieli sealed the victory for the Wheat Kings with a late goal. Kallionkieli broke out with a Tigers defender close on his tail. He was able to let go a backhand shot that found the top corner to give him five goals on the season and the Wheat Kings a 4-1 victory.

The Tigers’ next game is Tuesday, December 7th when the Tigers travel to Brandon to take on the Wheat Kings at Westoba Place. Game time is 7:00 (MST) and can be heard live on CHAT 94.5 FM at tigershockey.com or watched via webcast at watch.chl.ca.