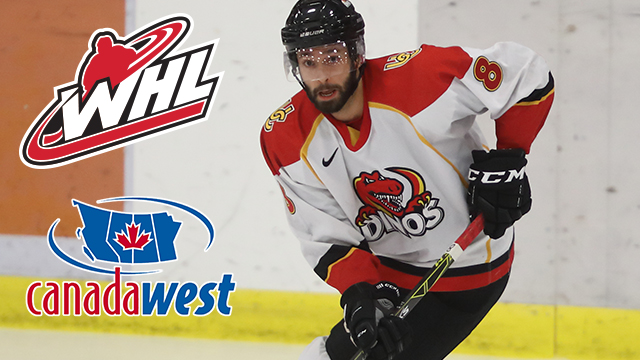 EDMONTON – One of the best players in Calgary Dinos’ history now has the conference’s top honour to his name.

The veteran forward – as were the other major award recipients – was selected the winner by the conference’s eight head coaches.

Pearce, who played over 250 career WHL regular season games between the Kootenay Ice and Medicine Hat Tigers, is the first Dinos player to claim the conference’s highest individual honour since Todd Johnson pulled off the feat during the 1996-97 season.

In addition to being selected the conference’s top player, Pearce also earned a third consecutive UBC Hockey Alumni Trophy win for sportsmanship and ability. The Port Coquitlam, B.C. native is looking to win the national version of the award for a third time in as many seasons.

Also honoured Thursday by Canada West were a trio of Saskatchewan Huskies, as Jordon Cooke claimed a second straight Goaltender of the Year award, Jesse Forsberg was named the conference’s Top Defencemen, and head coach Dave Adolph claimed the CW Coach of the Year award.

The Huskies will face fellow major award winner Tyson Baillie, who was named the conference’s top rookie, this weekend in Saskatoon for the best-of-three Canada West Final, which is slated for Friday through Sunday at Rutherford Rink. Game times, including Sunday’s Game 3 (if necessary), are all slated for 7 p.m. CT.

All Canada West Men’s Hockey Final games can be seen live on CanadaWest.tv

All five Canada West players to claim major awards Thursday are WHL graduates, who are currently making the most of their WHL Scholarship, which provides players with tuition, compulsory fees, and textbooks for each season played in the WHL.

In total, more than 140 former WHL players competed this season for Canada West men’s hockey teams, as the conference continues to be fueled in large part by the WHL and its commitment to post-secondary education and continued hockey development at the Canada West level. 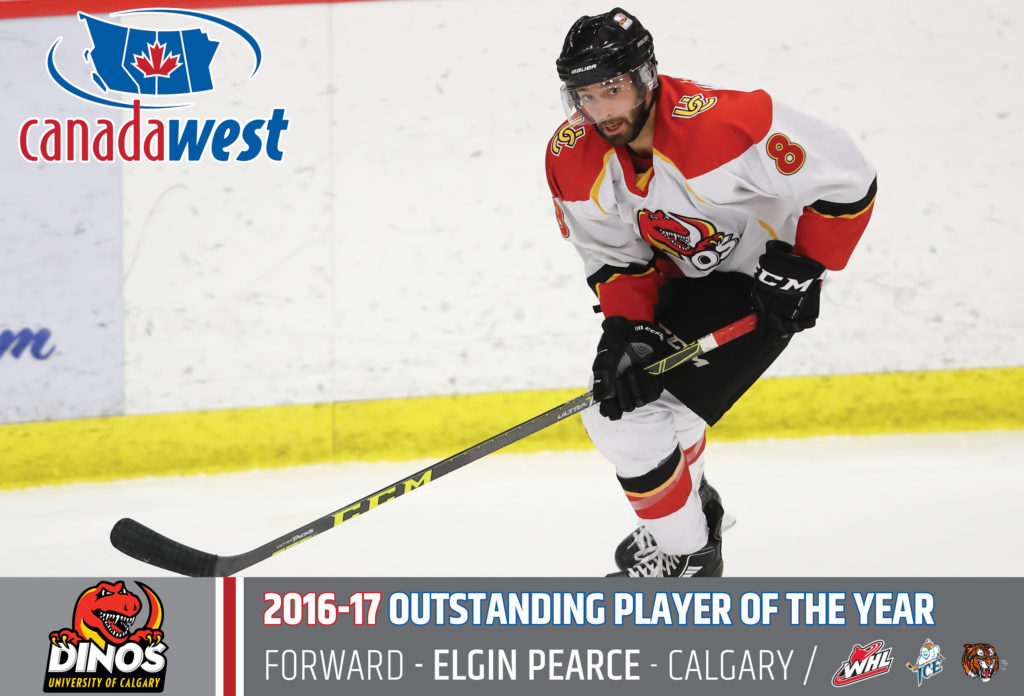 Veteran Elgin Pearce is the 2016-17 Canada West Outstanding Player of the Year after leading the conference in goal scoring this past season with 20, while finishing second in the scoring race with 31 points – just four shy of Mount Royal’s Conor Rankin.

Pearce is the first University of Calgary player to score 20 goals since Ken McKay in 2001-02 and the first Canada West player overall to score 20 since 2011-12 when Blair Macaulay scored 23 for Manitoba. He was one of only four players nationally to tally at least 20 goals this season.

He is also the first Calgary player to claim the conference’s top individual honour since Todd Johnson – current head coach of the Regina Cougars – earned the award during the 1996-97 season.

A former member of the Kootenay Ice and Medicine Hat Tigers, Pearce guided the Dinos to a third-place finish during the regular season and was also named the Canada West winner of the UBC Hockey Alumni Trophy for sportsmanship and ability. Pearce’s sportsmanship win marks the third consecutive season that he has claimed the honour. Both previous times he went on to claim the national award.

Pearce now moves forward as the Canada West nominee for both the U SPORTS Senator Joseph A. Sullivan Trophy (player of the year), and R.W. Pugh Award (most sportsmanlike).

“We want to win, and you need guys like Elgin Pearce to win. All of his hard work culminated this season, scoring 20 and leading the conference in goals. He has the respect of the other coaches and teams, it’s very well-deserved, and we’re proud of him. And it’ll be a big bonus to have the leading goal scorer in the league back on our team next year for his fifth season.” – Calgary head coach Mark Howell 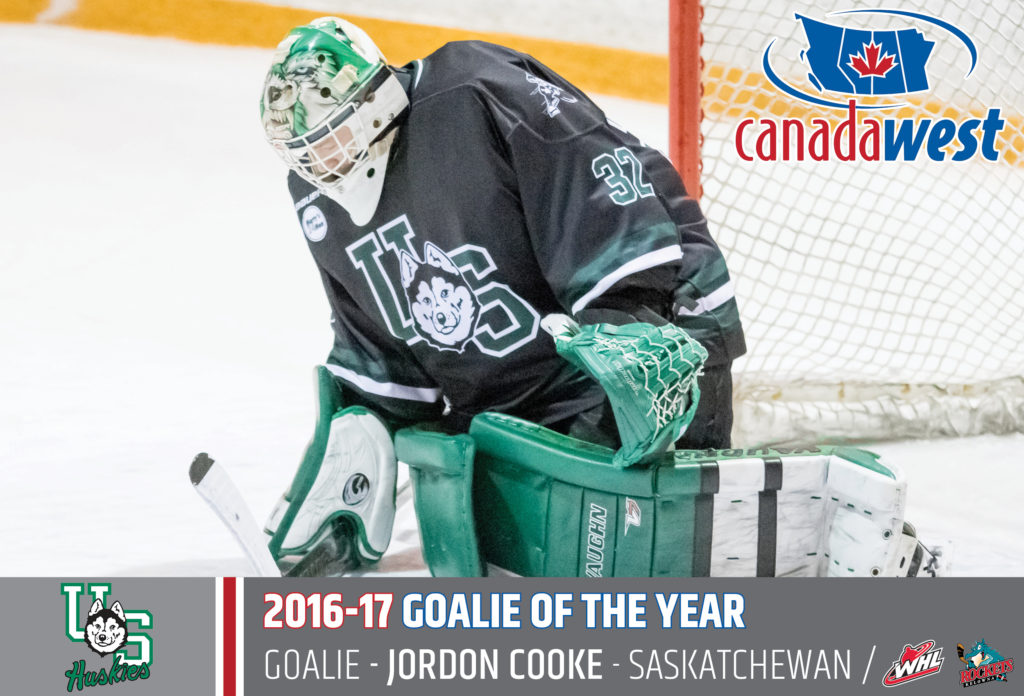 Goaltender of the Year

For a second consecutive season Jordon Cooke has been named Canada West’s top goalie, after posting a 19-4-1 record, 1.94 GAA, and .929 SV%. The former Kelowna Rocket was the backbone of Saskatchewan’s tremendous campaign, which saw the Huskies claim the conference regular season title for a second straight season.

2016-17 has been a phenomenal season for Cooke, as the Leduc, Alta. product was also named to Canada’s team at the Spengler Cup in Davos, Switzerland over the holiday break. Cooke’s four shutouts this season tied the Canada West single-season record, and his seven career shutouts are the most among any active Canada West goalie.

Cooke now moves forward as the conference nominee for the U SPORTS Goaltender of the Year award, which has been won by a Canada West goalie all but once since being created in 2009-10, including last season by Cooke.

“Last year, Jordon stood out in his first full-year as our No. 1 goaltender. He helped calm a young team, leading us to the Canada West pennant. In 2016-17, he made things look routine as our team skated to a first-place‎ finish in the regular season. He and our young defence enabled us to lead the league with a very stingy 2.11 goals GAA. He loves to play and loves the challenge. We are very fortunate to have him in a Huskie uniform.” – Saskatchewan head coach Dave Adolph 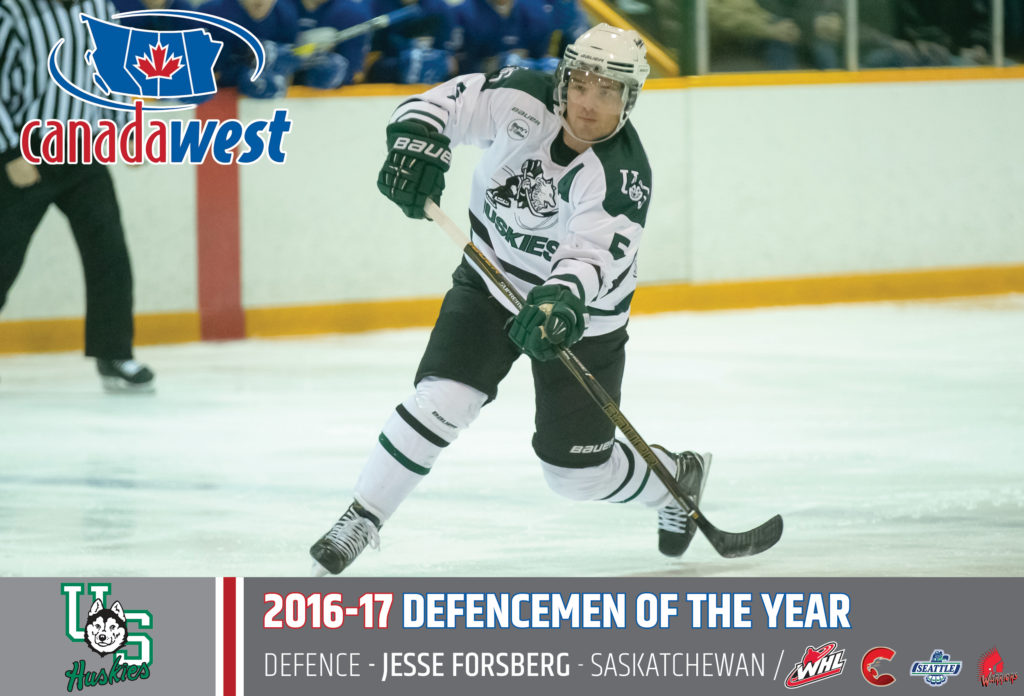 Defencemen Jesse Forsberg had an offensive season to remember, as the blueliner led the conference in scoring from the backend with 27 points, finishing fourth nationally in defencemen scoring.

Among his 27 points this season were three game-winning goals, which was tied with Logan McVeigh for the team lead in that category.

Forsberg now moves forward as the Canada West nominee for the U SPORTS Defencemen of the Year award.

“If you would have asked me two years ago if Jesse Forsberg was going to have this kind of impact on our team and find his scoring touch I would have said yes. He just needed to ignore the noise. For those who say CHL players won’t, or don’t improve when they graduate and move to U SPORTS you only to look at all this year’s Canada West first team all-stars. Jeese is big, strong, mean, and skilled. He just matured and reorganized his tool box and we’re lucky he did it here.” – Saskatchewan head coach Dave Adolph. 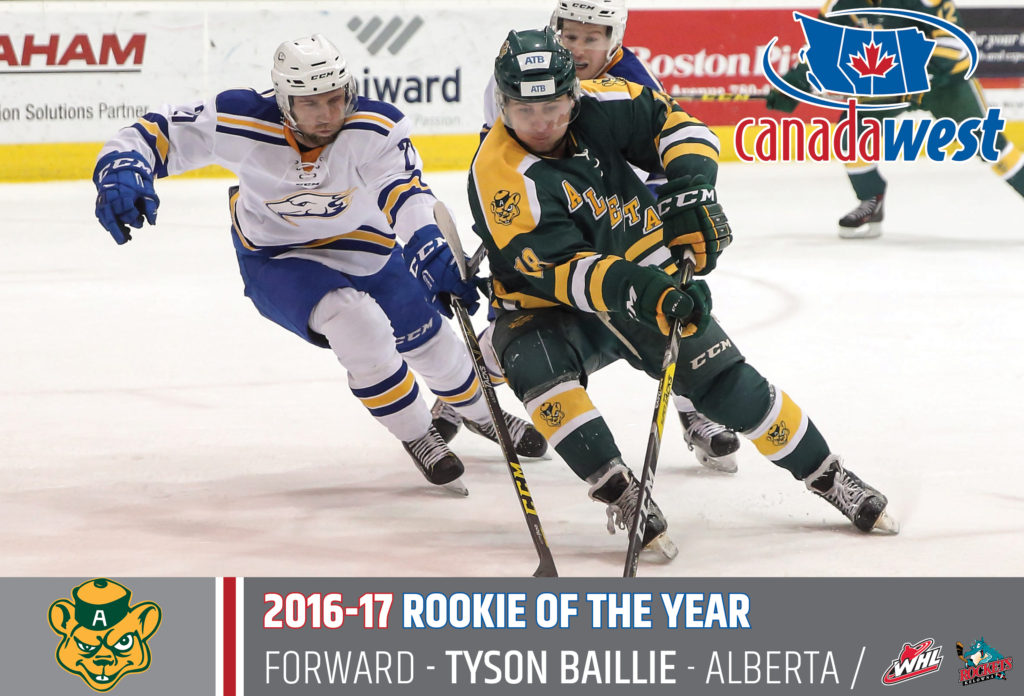 Rookie of the Year – U of A Hockey Alumni Trophy

Tyson Baillie is the 2016-17 Canada West Men’s Hockey Rookie of the Year after leading the conference rookie scoring race with 26 points.

Baillie is the first Golden Bear to win Canada West Rookie of the Year since Stephane Legault was given the award in 2014-15, and is the eighth Bear overall to win the award.

Highlighting the Edmonton products rookie campaign was his incredible consistency, as he was held off the scoresheet just ten times in 28 games, recording eight multi-point games.

The former Kelowna Rocket carried over his scoring touch from junior, where he posted 95 points last season as 20-year-old.

Baillie moves forward as the conference nominee for the U SPORTS Clare Drake Award as the nation’s top rookie.

“Tyson has had a tremendous first season. He is a relentless worker in the offensive zone, which allowed him to quickly establish himself as an offensive leader on our team. His five seasons with the Kelowna Rockets and participation at the 2015 MasterCard Memorial Cup definitely prepared him to be an immediate contributor on our team this season. The Golden Bears Hockey program is fortunate to have a player with such high character and work ethic like Tyson.” – Alberta head coach Serge Lajoie 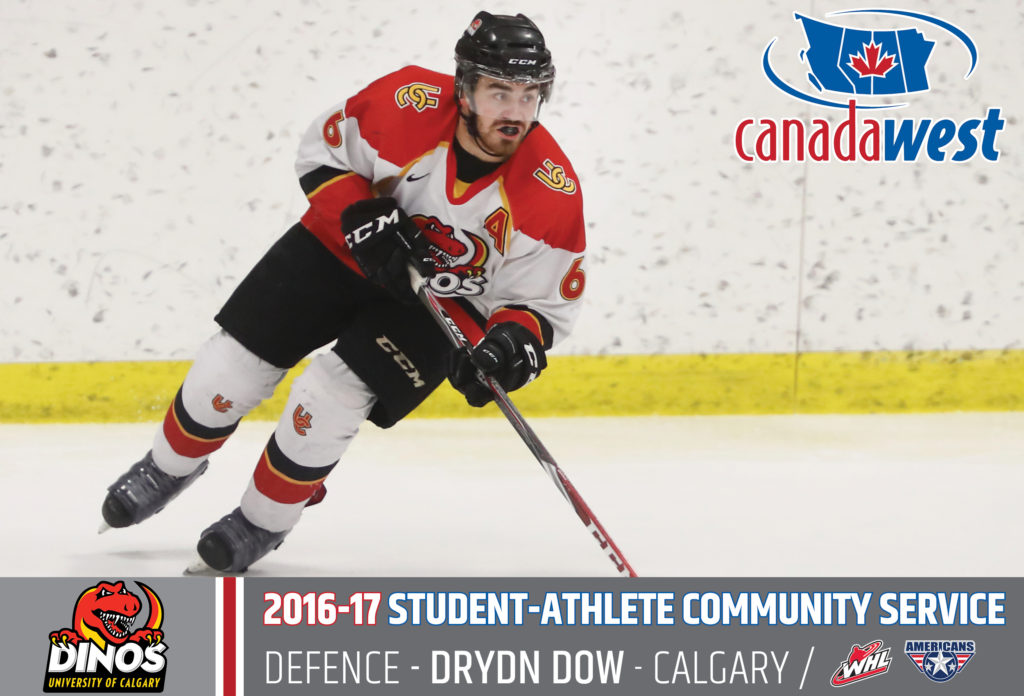 On the ice, Dow led all Dinos blueliners with five goals and 12 assists for 17 points. He topped the conference in plus-minus among defencemen at plus-14 – the third-best total among all players in the league – and played a significant role for the Dinos all season, appearing on both the power play and penalty kill units.

Academically, Dow is a fourth-year student in the Faculty of Kinesiology, where he has maintained a GPA of 3.5 over the past two seasons. He is heavily involved within the athletic department, organizing the annual all-sports slow-pitch tournament in September and as the men’s hockey representative in the Dinos’ leadership development program. He has been the lead instructor and coordinator of the Dinos hockey summer camps, as well as served as a development coach with the Junior Dinos development teams.

Away from the ice, Dow is a volunteer student-teacher at John Ware Junior High School in Calgary and also donates his time to the Foundations for the Future Academy as well as Inn from the Cold, serving breakfast to Calgary’s homeless.

Dow is now the Canada West nominee for the U SPORTS Randy Gregg Award.

“Drydn is a terrific young man, engaged in everything we do on and off the ice. He’s always positive and committed to everything – school, hockey, life – and is respectful of the people around him as well as his position. As you get further on in your hockey career you need to learn what it means to be a role model and leader, and Drydn has certainly become that. He’s going to be a great community leader wherever he ends up.” – Calgary head coach Mark Howell 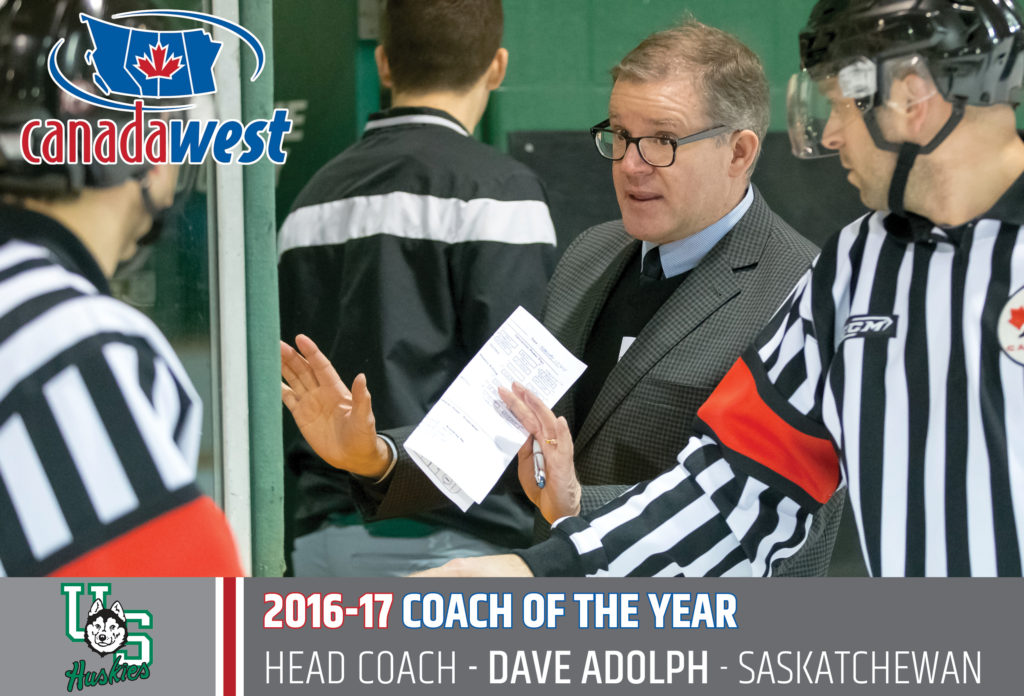 Coach of the Year

In his 24th season at the helm of the Huskies, head coach Dave Adolph guided Saskatchewan to another first-place finish during the regular season, earning him the 2016-17 Canada West Coach of the Year award. The win marks the third time in Adolph’s career he has claimed the conference coach of the year award (1997-98 and 1999-00).

Adolph’s 421 career conference wins are the most all-time. During his tenure at Saskatchewan Adolph has guided his team to six Canada West championship titles and 12 appearances at the University Cup, most recently finishing fourth.

During his career as a Huskie hockey player and co-captain, Adolph and his teammates captured three Canada West championship titles, winning Saskatchewan’s only University Cup in 1983.

Adolph now moves forward as the Canada West nominee for the Father George Kehoe Memorial Award as national coach of the year.

“The storied success of our men’s hockey program is due in no small part to the continued efforts of coach Adolph. He continues to do an excellent job in bringing top notch student-athletes to our program. This year is another example of that. This recognition is extremely well-deserved and an acknowledgement of his ongoing efforts with Huskie Hockey.” – Saskatchewan athletic director Basil Hughton

Rankin claimed the Dave “Sweeney” Schriner Scoring Trophy at the conclusion of the Canada West season after leading the conference in scoring with 35 points (17-18-25) in 26 games.

The Huskies’ goaltending tandem are the Adam Kryczka Memorial Trophy winners after combining for the conference’s top goals against average – just 2.11. The award is given to the goaltenders on the team with the fewest goals against during regular season play.

The Calgary Dinos are the conference’s Fair Play Trophy winners after amassing just 348 penalty minutes during the 2016-17 season – one minute less than the UBC Thunderbirds.

Canada West is the premier athletic conference in the country and is home to champion student-athletes that excel on the field, in the classroom and in their communities. Canada West and its 17 member institutions commit to a student-athlete experience where competitive excellence, scholarship and sportsmanship contribute equally towards moulding outstanding graduates and community leaders.