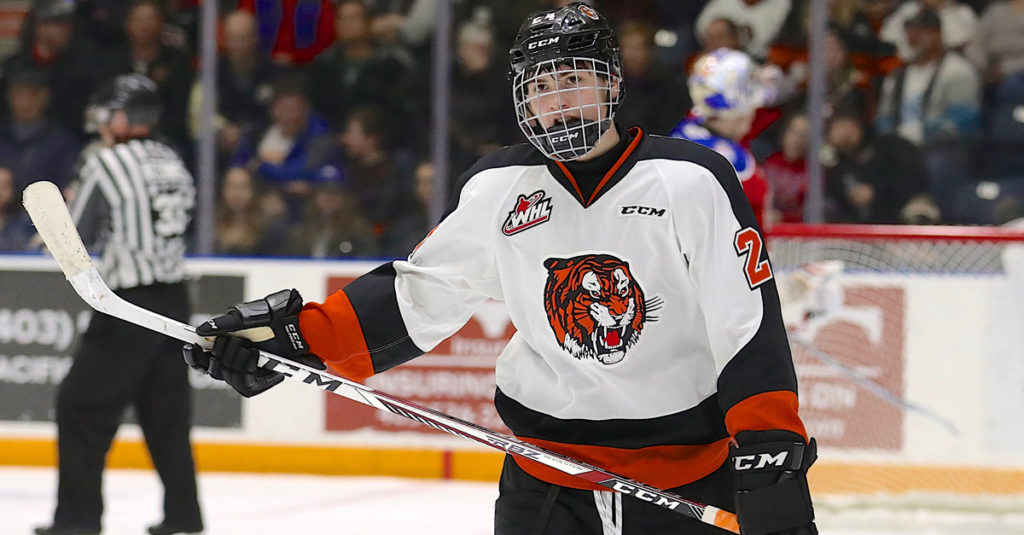 WHL Next Generation is a 22-part series highlighting a handful of the future stars of the Western Hockey League. From first-round bantam draft picks to later-blooming selections, get to know the names of players set to establish themselves as the newest crop of exciting talent to grace the WHL. From August 1 through September 11, get the inside scoop on the incoming crew of 16-year-olds.

It hasn’t taken Josh Williams very long to start making an impact at the WHL level.

The 16-year-old Medicine Hat Tigers prospect has been outstanding through his team’s first two pre-season games, and he hasn’t shown any signs of slowing down.

“Camp’s been great. You know, the pace has been high, the competition’s been good and I’m having a really good time so far,” Williams said.

Though it’s still early in the pre-season, the rookie right winger has made a very good case for the Tigers to keep him around come the start of season.

“I think I just need to play my game. Play with my strengths, use my speed, use my skill and my goal is just to be an everyday guy for this team.”

The Tigers’ first round pick, fifth overall at the 2016 WHL Bantam Draft, Williams hasn’t wasted any time making his mark on the score sheet.

In two games with the Tigers so far this pre-season, he’s notched four goals and two assists, the most of any Medicine Hat player.

That kind of production isn’t unusual for the Langley product.

Williams notched 55 points (18 goals, 37 assists) in just 27 games in his first year of Midget hockey with Yale Hockey Academy Prep last season, good for third in scoring in the league.

“My line this year is really fun to play with. I couldn’t ask for better teammates,” said Williams, who played on a line with Lethbridge Hurricanes prospect Dylan Cozens.

Congrats to my linemate @willie142001 on his first WHL goal, bright future ahead of him

Now, the two prospects will find themselves on opposing sides of one of the WHL’s fiercest rivalries.

Still, Williams had nothing but good things to say about his former teammate.

In addition to his play at Yale last season, Williams also had the opportunity to join the Tigers for four games in December and February last season.

“It was really fun,” Williams remembered. “I could tell, though, that I was a little bit behind, a little bit too weak to be in the league, so I really focused on that this summer just so I would be able to play in the league this year.”

Still, the then-15-year-old was able to tally his first WHL goal in his fourth and final game with the Tigers.

“There was a good fore-check and we created a turnover and it was sort of a 2-on-0, 2-on-1 in front and Tyler Preziuso gave me a really good pass back door and I put it five-hole on the back-door pass,” Williams said. “I was excited just to get the first one out of the way and hopefully that was the first of many in my career.”

Scoring a goal for a WHL club was the culmination of a life-long dream for the 6-foot-1, 185-pound forward.

Williams and the Tigers kick off the 2017-18 WHL Regular Season with a home-and-home set against the Lethbridge Hurricanes, beginning at the Enmax Centre on Sept. 22 and concluding at the Canalta Centre on Sept. 23. Puck drop on the second game is at 7:30 p.m. MDT.