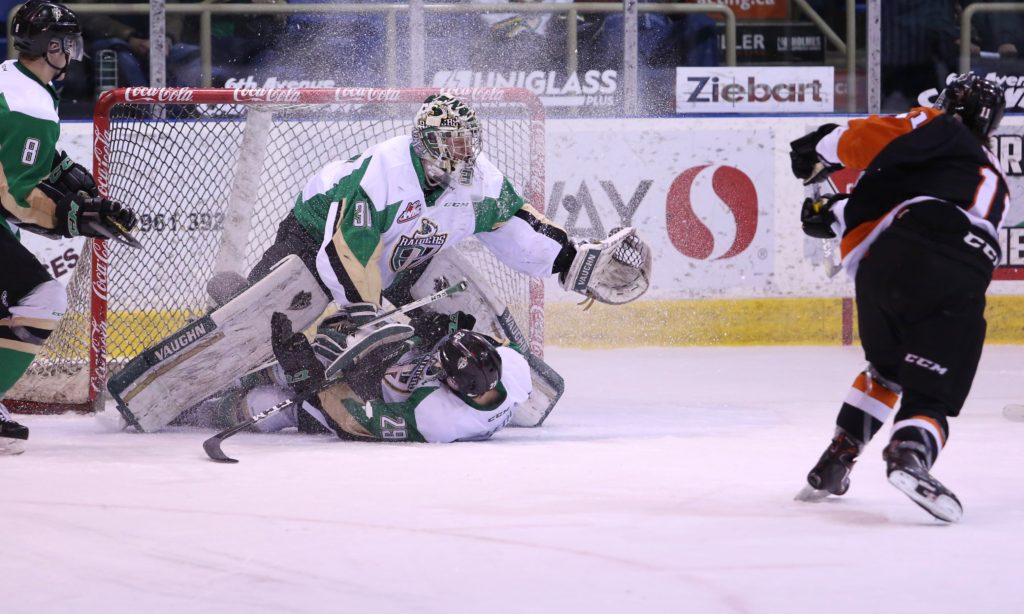 Prince Albert, SK — It was a wild night at the Art Hauser Centre.

Steven Owre scored 31 seconds into overtime to complete yet another Medicine Hat Tigers comeback victory in a 6-5 thriller over the Prince Albert Raiders. Owre raced down the left wing before cutting into the slot and ripping a shot over the glove of Raiders goaltender Nicholas Sanders to steal away a victory after trailing by a pair in the third period, pushing Medicine Hat past 90 points on the season with a 45-18-1-0 record.

Mason Shaw got the offence rolling midway through the first period, continuing his four-game goal streak by firing a low shot through Raiders starter Ian Scott. But the Raiders found an opening of their own just a few moments later with James Hamblin in the box for high sticking. Prince Albert’s Curtis Miske beat a sprawled out Michael Bullion to the twine thanks to a timely back-door feed from defenceman Brayden Pachal, and the Raiders were right back in the contest.

The shot-for-shot action continued into the middle frame, with Cavin Leth cracking the 20-goal mark to push Prince Albert in front before Mark Rassell equalized with his 31st of the year on a shorthanded break — setting the stage for a thrilling third. The Raiders got the early jump when Leth struck for his second of the evening, then Parker Kelly tacked on three minutes later to seemingly seize control of the game. That is, until the never-say-die Tigers cued the comeback.

Matt Bradley snapped a three-game goalless drought to reach the 30-goal mark just over a minute after Kelly’s marker. While D-Jay Jerome quickly answered to re-establish a two-goal lead for Prince Albert, Bradley’s milestone seemed to light a fire beneath the Tabbies and they stormed back with goals from John Dahlstrom and Rassell to force overtime.

Bullion turned aside 36 pucks in the win, while Prince Albert’s Scott was pulled after allowing four goals on 30 shots. Sanders was beaten twice on 11 shots in relief of Scott, giving him the loss and dropping Prince Albert to 17-40-5-2 on the year.

The Tigers — who jumped two spots to No. 7 in the Canadian Hockey League’s Top 10 rankings this week —  continue their road trip Friday in Regina against the Pats at 6:30 p.m.