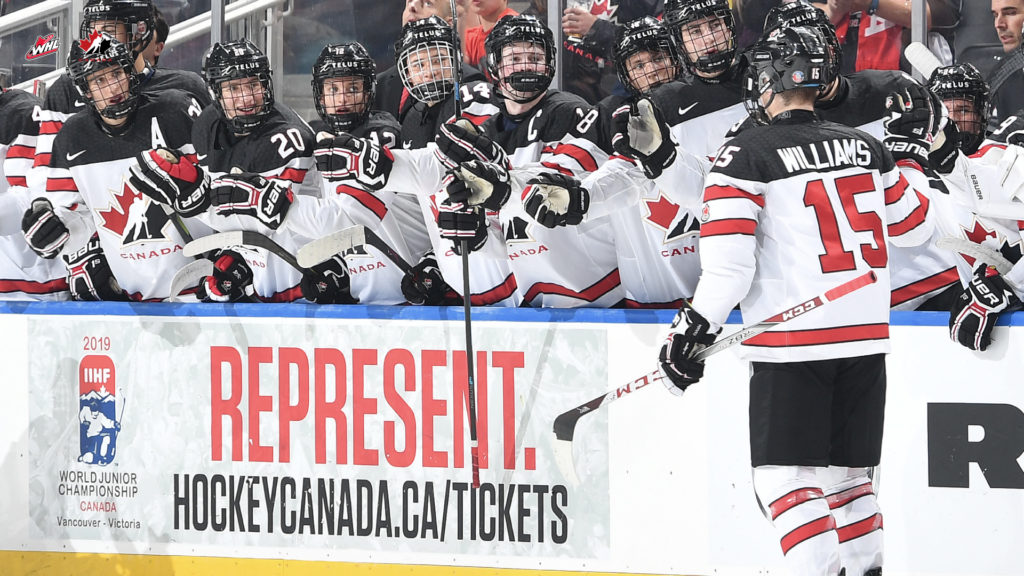 Edmonton, Alta. – Graeme Clarke scored the eventual game winner on the power play 1:18 into the third period before Josh Williams (Medicine Hat Tigers) took a feed from Jamieson Rees to give Canada insurance in a 4-2 win over Slovakia on Day 2 of the Hlinka Gretzky Cup.

Andrej Golian and Artur Turansky scored third period goals to bring Slovakia to within a goal with just over 10 minutes remaining before Williams reinstated the two-goal cushion at 12:12 of the final frame.

Alexis Lafrenière led the way with a goal and an assist while Dylan Holloway also tallied and defenceman Justin Barron (Halifax Mooseheads) finished the night with two assists.

Canada outshot the Slovaks 58-19 as goaltender Taylor Gauthier (Prince George Cougars) made 17 saves to help his club improve to 2-0, outscoring opponents 14-2 in the process.

While it was a closer affair than Monday’s 10-0 win over Switzerland, Williams saw the hard-fought affair as a good primer as Canada prepares to face undefeated Sweden on Wednesday, suiting up for their third game in as many nights.

“The adversity [of a close game against Slovakia] will help us in the long run; getting our legs going, working a little bit harder,” he said “I think it will help us get going for tomorrow night against the Swedes. We’ve got to beat [Sweden]. First place is a big advantage in this tournament – getting the home ice and the last change. We basically have to focus on tomorrow and beating the Swedes.”

Canada’s back-to-back wins at the tournament have been fueled by Western Hockey League talent, including Peyton Krebs (Kootenay ICE), who is tied for Canada’ scoring lead at the tournament with four points (2G-2A) while Kirby Dach (Saskatoon Blades) and Matthew Robertson (Edmonton Oil Kings) have three points (1G-2A) each.

A trio of WHL players at the tournament have a pair of points each as Dylan Cozens (Lethbridge Hurricanes) and Williams have each contributed a goal and an assist each with Sasha Mutala (Tri-City Americans) has a pair of assists to his credit. Defenceman Kaedan Korczak (Kelowna Rockets) has a single assist in the tournament.

After a 4-2 loss to Sweden on Monday, Slovakia falls to 0-2 in the tournament as Canada dictated the pace at Rogers Place.

Canada is back in action Wednesday night in Edmonton, taking on Sweden (2-0) at Rogers Place when the puck drops at 7:00pm MT/9:00pm ET.