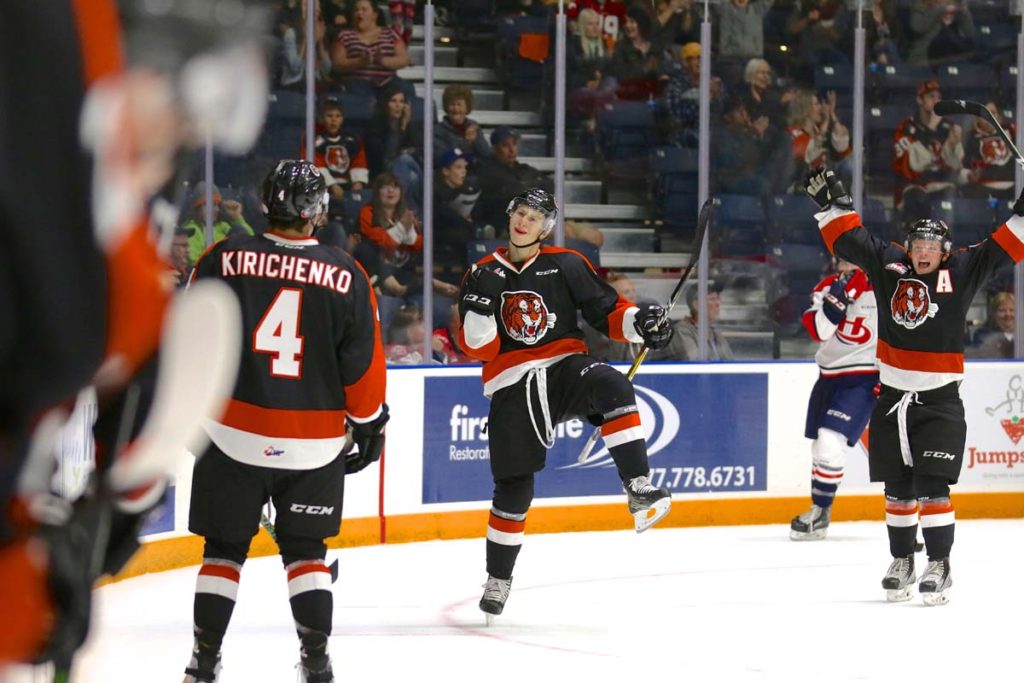 Medicine Hat, AB — The 2016-17 season were full of ups and downs. There were lots of surprises and many expectations surpassed by epic proportions. 51 wins. Check. Central Division Title. Check. Having all 15 returning skaters reach new career highs? I think we can say that’s priceless. That was just the case for the Tigers who jumped out to a 20-5-1-0 record heading into December and right on the heels of the Eastern Conference leading Regina Pats all season long.

The Tigers were also fortunate that the chemistry was never inturupted during the first half of the season, seeing not one player miss more than a game due to injury. It wasn’t until January when David Quenneville and Ty Schultz went down to long term injury. Medicine Hat was able to battle through a 5 game losing streak to come back with a 6 game winning streak of their own. We scored 350 goals, the most since the 1990s. We recorded 50+ wins for just the 4th time in franchise history. We also played the first ever playoff game in the Canalta Centre.

With lots of firsts this season, in Part 3 of our Year in Review, we look at just a few of the Career seasons some Tigers had…

Heading into his NHL draft year (because of a late 1998 birthday) Mason Shaw broke all his previous career highs which were set last season. In the 2015-16 campaign Shaw managed to collect 60 points in 67 games in his first full season. During his 16 year old year Shaw underwent knee surgery and was limited to 23 games.

In 2016-17 Shaw was a offensive threat all season long. Playing alongside Import John Dahlstrom and Matt Bradley the trio were one of the best second (or first) lines in the entire WHL. At one point in the season Shaw was leading the entire Canadian Hockey League in assists, showing off his playmaking abilities. Shaw would end the season with 67 helpers which was good for 5th best in the league.

Throughout the season Shaw climbed the charts of the NHL Central Scouting lists, eventually landing in the top 50 potential picks for the Draft this season and a date with the heavily scouted NHL Combine come June. Shaw’s determination every night won over the likes of scout but more importantly Tiger fans. Killing penalties, on the power play, laying a hit on a larger opponent or scoring a big goal, Mason Shaw did it all in 2016-17.

Shaw would finish the season with 94 points, tied for 7th best in the WHL.

Hamblin was drafted in the 2014 Bantam Draft 17th overall and made the jump from midget hockey to the Western Hockey League in 2015-16. The Edmonton native was limited in his minutes during the season appearing in 54 games and recording just 3 points. 2016-17 would prove to be a break out year for the centerman as he got bigger and stronger for his second campaign in the dub.

Gaining the trust of his teammates and coaches started early for Hamblin as he was seen as a quick and consistent penalty killer. Hamblin would score his first career shorthanded goal in the Tigers home opener as he and Mark Rassell teamed up to create one of the most dangerous duos while shorthanded. Hamblin would finish the season with 4 shorthanded goals and 4 more on the power play as his ice time increased into the post season.

The 17 year old made strides in the face off circle as well having a knack for stealing draws and going up against some of the WHL’s best centres. Hamblin was on average 60% or more on his face offs and took pride in working on them after practice with assistant coach Bobby Fox.

Hamblin’s success would allow him to break the 20 goal barrier and almost touching the 50 point plateau in just his second season.

Heading into his 3rd season with the Tigers after joining in 2014-15, Rassell’s expectations were a bit higher. Providing leadership in the dressing room and within the community all the while trying to increase his point totals (which were new career highs) from last season. Rassell started the season red hot. With 5 points in his first 4 games, including back to back shorthanded goals, Rassell quickly proved to Tiger fans and the rest of the Western Hockey League that he was one to watch.

Alongside James Hamblin the Calgary native was potent on the penalty kill all season long. Using his long reach (with his 6’2 frame) and increased speed and agility Rassell was able to break away from the opponent, normally netting him a shorthanded breakaway. Rassell would pull off his 2016-17 patented breakaway move, fore hand, back hand, five hole, goal for 6 of his 7 shorthanded goals this season. Those 7 goals would lead the entire Western Hockey League.

Not only was Rassell dangerous shorthanded, teams had to watch for him while even strength. Rassell’s increased strength and speed allowed him to get to the quiet areas and was setup by his teammates for a team high 36 goals. His scoring touch didn’t stop in the post season despite the tight checking defense. Rassell would pot another 7 goals in 11 games during the playoffs, 4 of those on the power play and 2 being game winners. In total the Calgary sniper would score 43 times for the Tigers in 2016-17.

Rassell doubled his point totals from 2015-16 recording 61 points alongside his 36 goals. Mark eclipsed both the 200 game and 100 point marks this season as well.

One of the biggest surprises in the 2016-17 season was the emergence of Zach Fischer. Coming off of an injury plagued 2015-16 no one had anticipated (except maybe Fischer himself) the type of season the Lloydminster, Alberta native would have. Fischer’s end to the 2015-16 season however was one to keep an eye on as after returning from injury Fischer put up 7 points in his last 6 games to end the year.

Fischer’s presence was felt on a number of occasions this season. Being promoted to the Tigers top line with overagers Chad Butcher and Steven Owre, he wasted no time becoming a goal scorer, enforcer and power forward all wrapped up into one. In the Tigers home opener Fischer would record a hat trick, the first of his career and the first ever 3 goal game in the Canalta Centre. He later then would tally 3 more times in the next 4 games including dropping the mitts multiple times.

Zach would record new career highs after the midway point in the season, anything after that would be gravy on what was to be a great season. Fischer continued his dominance and the coaching staff saw his potential as well, putting him on the first power play unit to play setup in front of the net and high slot, looking for garbage goals or one timers. Fischer would be rewarded on the power play with 12 goals and 34 goals overall, leading the Tigers in scoring at multiple points of the season.

Throughout 2016-17 Fischer recorded 20 multi-point games with eight of those being three points or more. He recorded 2 hat tricks and a team high 145 penalty minutes, usually causing other teams to lose their cool. In his first career post season with the Tigers, he was even more dangerous scoring 7 times in 11 games and adding 3 assists, alongside 24 penalty minutes.

It definately was a season to remember for the hulking winger and he will be one to watch at the upcoming NHL Draft this June in Chicago and onto next season.

The Victoria, BC native made his WHL debut last season as a 16 year old collecting 10 points in 59 games. In 2016-17 Preziuso was relied upon to lead a Tigers 4th line of Ryan Jevne and rotating rookies Ryan Chyzowski and Gary Haden. Tyler is touted as one of the fastest skaters in the league and has used that speed to create chances for his teammates and providing the energy needed for the Tigers to be successful.

Throughout the entire year the coaching staff rolled 4 lines creating a tidal wave attack. All 12 forwards dressed for that night could put the puck in the net at any given time and Preziuso was in that category. Although only finding the score sheet 5 times he was dangerous and could have doubled that total no problem. His speed and agility make him a tough player to handle for opponents on any given night.

Preziuso matched his jersey number in points with 22 and broke all previous career highs in 2016-17. In his last 24 games Tyler recorded 14 points including two separate 3 game point streaks, the longest of his career so far. With the potential Preziuso possesses it will be fun to watch him grown once again next season into a bigger offensive threat.

Drafted in the 2013 Bantam Draft, a second round pick (taken just before Mason Shaw), Jevne is an energizing player to watch. A part of the Tigers 4th line this season Jevne was counted on in many other situations including the penalty kill. Normally paired with Matt Bradley or Shaw to kill off an infraction, Jevne showed the grit and hustle required to be part of the special teams unit. Jevne has a thunderous shot and can level unsuspecting opponents with the body at any given moment.

Jevne’s totals in his first season last year showed potential to increase and 2016-17 was the opportunity to do so. Exceeding expectations Jevne tripled his point totals recording 28 points in playing all 72 games and adding another 3 points in the post season.

Ryan started the 2016-17 campaign with 4 points in his first 5 games and would continue to play a pivotal role for the Tigers on their 51 win season. It will be fun to watch Jevne grow into an all round player next season as his responsibilities on special teams increases.

It was a great season full of lots of successes. in addition to the 6 players mentioned above,  9 more Tigers reached new career highs offensively including:

There are no doubt surprises every season which makes hockey and sports so exciting. The 2016-17 edition of the Medicine Hat Tigers was full of surprises and new expectations and fans will have to wait until September to see if new career highs can be set.

In the final part of our Year in Review next week, we recap the overall season and look ahead to next year!