BUNZ LOOKING TO BOUNCE BACK IN 2ND YEAR AS A PRO 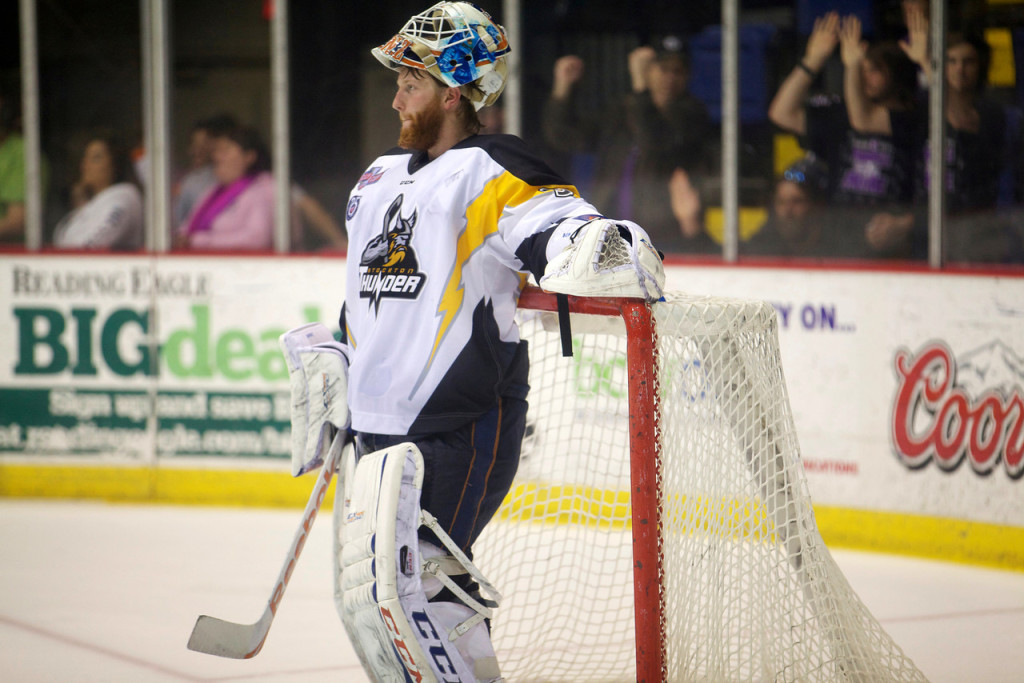 Sherwood Park — A mulligan might have been of great benefit to Tyler Bunz last season.

He could have erased all of those nights when he struggled to recover from a soft goal or a bad game while playing for the Stockton Thunder in the ECHL. More importantly, he could have come out of his first season as a professional goaltender with far fewer questions to answer.

Instead, the Oilers’ 2010 draft pick is sitting in a locker room at Millennium Place after another session at Edmonton’s annual development camp talking about making amends.

“It was definitely a frustrating year,” he said. “I started off really well, then I got into a slump that I don’t think I handled very well, very maturely, and I just couldn’t recover from it.”

Bunz got off to a good start. In the second game of the season, he turned away 17 shots by the Ontario Reign to register his first shutout and first win. He didn’t take a loss in regulation over his next six games, either.

Bunz has been on a similar path in the past. As a 16-year-old with the Medicine Hat Tigers, he struggled mightily before emerging as the franchise leader in wins.

The St. Albert native will be pitted against Olivier Roy, who has one more year of pro experience, when he returns for the Oilers’ rookie camp in September. One will head to the Oklahoma City Barons in the American Hockey League, the other to the Thunder.

For the last two seasons, Yann Danis has been in the Barons’ net, but he turned the page when the free-agent market opened, signing a one-year deal with the Philadelphia Flyers. The Oilers then reeled in Randy Bachman, who has AHL and NHL experience with the Dallas Stars.

“I can only control what I do and this camp is good for that. It gets me back into game shape, then whatever happens next year, happens,” Bunz said. “Just because they signed another goalie doesn’t mean I’m going to give up. It doesn’t mean I’m not going to work for that spot in Oklahoma. I want to be there, so I’m going to do everything in my power to hopefully change the minds of the coaches.

“I don’t think I gave them a lot of reason to trust me with the season I had, but it could all be forgotten if I have a good start at camp.”

In Stockton, Bunz saw a lot of pucks and played a lot of games. But he could end up back in the ECHL for all or part of next season.

“You see a lot of situations you won’t see at a higher level. Breakdowns just happen more often in that league and you have to be the one able to bail your team out,” he said. “When I was struggling, that was the thing that was killing me. Those breakdowns would happen, then I’d let in a soft one or one I should have had.

“So if I do end up back there, it won’t be the end-all for me. It’s all about development and it takes a lot of years for a goalie to make the NHL.

“That league really does show your true colours … it was a year I can learn from.”