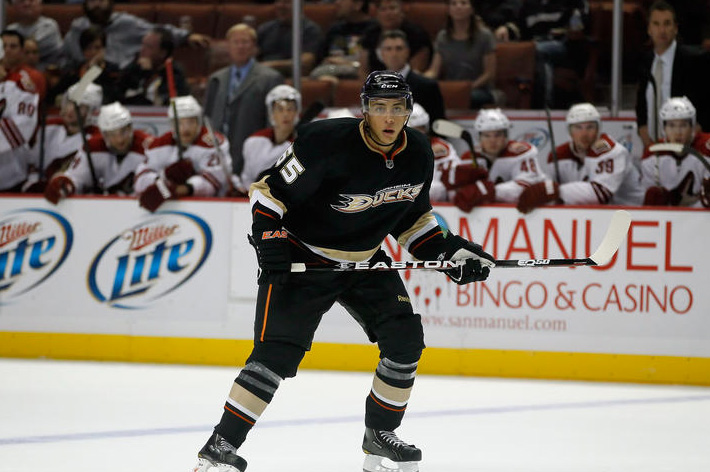 A pivotal day in recent Anaheim Ducks history, June 26, 2009 was the day that saw Chris Pronger traded to Philadelphia as part of a draft day exchange that helped catalyze the team’s efforts to get younger. Though Joffrey Lupul may have been the biggest name that headed west that day, it was Luca Sbisa and the two first round draft picks the Ducks acquired that have helped set the stage for a 2012-13 season in which a greater comprehension of the effects brought about by that blockbuster trade will be realized.

The 2009 first round pick acquired in the Pronger trade was sent to Columbus shortly afterwards in exchange for a pair of selections, one of which was used to select Kyle Palmieri 26th overall. Palmieri, 21, has already produced 109 points in 113 games after a pair of standout seasons with the AHL’s Syracuse Crunch and appears on the verge of earning a more permanent NHL roster spot after a seven-point, 18-game stint with Anaheim that concluded with three goals and five points over his final six games.

The 2010 first rounder acquired in the Pronger trade was used on Long Beach native Emerson Etem, who was selected 29th overall and endured a few boos amidst some polite cheers for a Southern California product at a partisan Staples Center as the Los Angeles Kings played host to the Draft.

A much warmer reception was experienced for three seasons in Eastern Alberta, where Etem grew as a member of the storied Medicine Hat Tigers franchise, five-time WHL champions and back-to-back Memorial Cup winners in 1987 and 1988 catalyzed by a teenage Trevor Linden. In 2011-12, Etem became the first Tiger in 20 years and first WHL skater in 11 years to score 60 goals in a season by finishing with 61 goals and 107 points in 65 games played.

It was a perfect storm of hockey development as articulated by legendary Medicine Hat broadcaster Bob Ridley, who has played witness to the major junior careers of players like Linden, Lanny MacDonald, Kelly Hrudey and Rob Niedermayer and referred to Etem as “kind of the son that every dad would love to have.”

A veteran of over 3,000 Tigers broadcasts, Ridley’s ebullient praise of a player who clearly struck a positive chord with the hockey-mad city began with the now 20-year old’s on-ice maturity.

“The year before and so on, he had great speed, he had NHL speed,” Ridley said. “You knew that boy, you know, if he keeps developing, he’s got a great chance of playing in the NHL someday. You watch him play last year when he put up 61 goals, and you knew that he had come of age as a hockey player because he found different ways to score. The year before, he’d go wide, cut to the net – that was his big play. All the defensemen got used to it and therefore he wasn’t as effective as he was last year. Last year he [provided] traffic in front of the net. He mucked it out, you might say. He was able to take some punishment in front of the net, and delivered it back.”

“He became just a better all around player, and you just knew that he was destined to play in the NHL, no question about it.”

Etem referenced two players who helped further his own maturity and development. Off the ice it was Matthew Konan, a Tustin native and Flyers signee who became the seventh Tiger in club history to appear in at least 300 WHL games. On the ice, it was linemate Hunter Shinkaruk, the highly touted center two years Etem’s junior and likely 2013 first round draft pick who immediately developed chemistry with the Ducks prospect as a rookie who joined the team a few weeks shy of his 16th birthday in October, 2010.

“We’ve always been a small organization as far as height-wise is concerned, but we’ve always had a fast team, a hard-working team, and it’s come along every year,” Etem said. “I was just so fortunate to be a part of that story, and I’m looking forward to what’s next.”

What’s next is the battle for an open spot amongst the Ducks’ forward corps in a role he believes will accentuate the speed, natural goal scoring ability and two-way responsibility he hopes to display at Honda Center in 2012-13.

“I think, for me, obviously, I try to fit in the top six as a scoring role,” Etem said. “There’s a lot of competition up front in the forward position, so I’m just going to work as hard as I can to hopefully prove myself.”

A more thorough discussion on the role he’ll battle to provide for Anaheim will have to wait for training camp, where Palmieri, Peter Holland and perhaps even Richard Rakell and Max Friberg will also be in competition for any and all available playing time with the big club.

That can wait until the CBA situation has been resolved. At the club’s prospects development camp at Anaheim Ice last week, Etem discussed his experience inside the walls of Medicine Hat Arena and performing in front of the team’s tenured broadcaster who began driving the team’s bus out of necessity in the mid-1970’s and hasn’t stopped since.

“Oh my God, he’s a living legend,” Etem said of Ridley. “Around town, there are restaurants with burgers named after him. He’s just such an all-around good guy, driver, one of the best broadcasters in the history of hockey. He’s just such a legend. Great guy, he’s good to all the players. It’s just fortunate to meet a guy like that.”

Etem’s appreciation was repaid fully by Ridley in a testament to the all-encompassing hockey environment that properly incubates developing prospects both on and off the ice in the city of over 60,000 situated 30 miles west of the Saskatchewan border. It’s a unique perk that isn’t necessarily experienced by players based in the larger WHL population centers of Calgary, Edmonton, Vancouver and Seattle.

That focus was raucously expressed every time the Tigers took the ice at the Medicine Hat Arena, one of the older, throwback WHL barns that has a reputation of being an intimidating venue to play in as a visitor and home to some of the league’s more adept hecklers. There is a waiting list for season tickets.

“Playoffs are a whole different story, but it’s sold out for seven years now, and it brings up places like Montreal or Toronto,” Etem said of the atmosphere inside the Arena. “Such loyal fans. Even here in Anaheim, you can compare. Fans up there junior hockey-wise, it’s doesn’t get much better. The three years I was there, it never went downhill.”

And as his focus shifts towards the dawn of his professional career, the fundamentals he strengthened in his final WHL season are what he was looking to show off at his most recent development camp – the third he has attended since being drafted in 2010.

“There’s a lot more on the line for me, I think, this year. I’m just trying to work as hard as I can. Prove myself, get bigger and stronger each and every summer, and I think I’ve been doing that. Hopefully this is the year, and I’m just going to try my best.”

A Ducks roster spot does seem like the appropriate progression in the development of a player who emerged as a capable and ready forward following three seasons in Medicine Hat, a city occasionally referred to colloquially as Alberta’s “Orange County” because of the prominent color worn by the Tigers.

“It doesn’t matter what happens from here on in – he might someday, 40 years from now, be a member of the Hockey Hall of Fame. Medicine Hat will always remember Emerson Etem and what he had brought to the Tigers for these many years.”