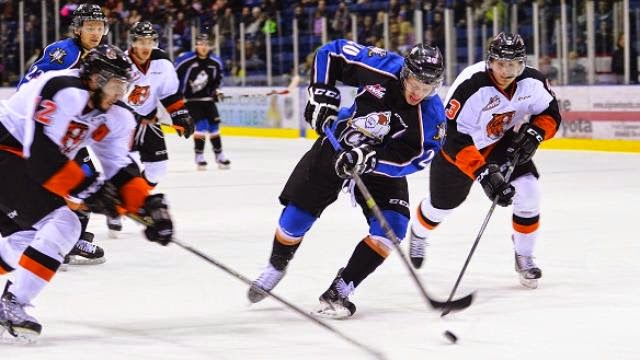 Medicine Hat, AB — The Medicine Hat Tigers came into Saturday night playing their fourth game in five nights. A stretch that must seem to be long for the players as they have been shorthanded for each game, only dressing 16 skaters. On this night, the Kootenay Ice were waiting, looking for revenge on Wednesday’s 7-3 loss.

The opening period was fast paced, up and down hockey for the sold out crowd at The Arena. The Tigers worked hard and generated multiple chances, including back to back power plays in which the Tigers got 8 shots on goal but couldn’t solve Ice goaltender Wyatt Hoflin. Mark Rassell showed Tigers fans his potential as he played a fantastic period for the home side, creating multiple chances off the rush and playing well defensively. Blake Penner also had a stellar period with his relentless forecheck. Penner had a few chances to bury his 4th of the season, but all were stymied by Hoflin. The Ice would score the only goal of the period, a power play marker by Jaedon Deschaneau.

The middle frame was an even battle between the two teams, once again a fast paced game as the speed of the Tigers overwhelmed the Ice defence at times. The second boasted no penalties for either side in what was clean hockey for 20 minutes. Kootenay would increase their lead late in the period as Jon Martin threw the puck on net and a driving Matt Alfaro banked the puck off his skate and past Nick Schneider.

Tigers fans were treated with a sore neck in the third as the boys tilted the ice and put the pressure on, throwing 21 shots on goal in the period. Wyatt Hoflin would help the Ice weather the storm and push away all attempts by the Tigers, most notably a point blank shot by Blake Penner and a gorgeous play by Mark Rassell. In the end, the Ice would bag an empty netter on the back of Hoflin’s 48 save shutout with a 3-0 victory.

The Tigers next game is on Tuesday as they continue their 4 game home stand versus the Vancouver Giants, game time is 7:00pm. Call the Tigers Box Office to get your tickets today at 403-527-8406.

The Tigers will head out on the road to the US on December 5th, make sure to check tigershockey.com for your Road Trip Preview!