The Medicine Hat Tigers announced this afternoon they made two separate trades prior to the trading deadline at 3:00 p.m. today.

The Tigers sent 18-year-old forward Reid Petryk to the Everett Silvertip in exchange for the rights to 17-year-old Miles Koules who is currently with the U.S. National Under-18 team based out of Ann Arbour, Michigan.

The US National Team Development Program is the same program that produced current Tigers standout Emerson Etem prior to his arrival in Medicine Hat.

The right-winger has thirteen points in thirty-two games this season with the U.S. Under-18 team on three goals and ten assists. Last season, playing between the U.S. National Team Development Program in the USHL and the U.S. Under-17 Program, Koules played a total of sixty eight games collecting seventeen goals and sixteen assists for three points while spending forty two minutes in the penalty box. He picked up eight points with four goals and four assists in six games in the World Under-17 Hockey Challenge.

During the 2009-10 season, Koules also followed in Etem’s footsteps by attending Shattuck St. Mary’s for their U16 program. He played fifty-three games with twenty goals and thirty-eight assists totaling fifty-eight points with twenty-six penalty minutes.

“This deal gave us a real good 1994 prospect who will make an impact in our lineup should he join our team in the future,” said Tigers’ g.m. Brad McEwen.

“Reid has been a real good Tiger for the past two and a half years and we wish him all the best in Everett,” stated McEwen.

In the second trade of the day, the Tigers acquired 18-year-old left winger Brendan Hurley from the Kootenay Ice. The Ice will receive a third round bantam pick from the Tigers in the upcoming 2012 bantam draft.

Hurley is in his third full season with Kootenay and stands 6’ 1”, weighing in at 189 lbs. The native of Ft. Saskatchewan, AB has six points on three goals and three assists along with 29 penalty minutes in the 2011-12 season. He has a rating of 0 in the plus-minus department.

Last season, Hurley was a member of the WHL championship team in Kootenay and he brings 150 games of WHL experience to the Tigers. 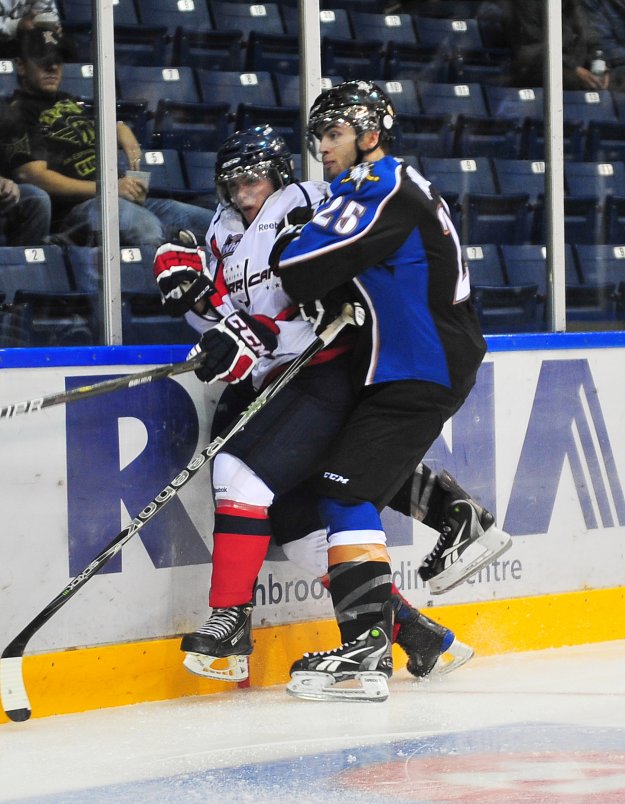 “We are really looking forward to Brendan bringing some hardness to our game and he will bring some presence to the forecheck which is something we felt would benefit our team,” McEwen said.

Hurley is expected to be in the Tigers’ line up when they take on the Edmonton Oil Kings on Thursday night. Game time is 7:00 p.m. at the Medicine Hat Arena.

Goals For Mental Health raises $19,455 as WHL players score in support of CMHA
11 hours ago