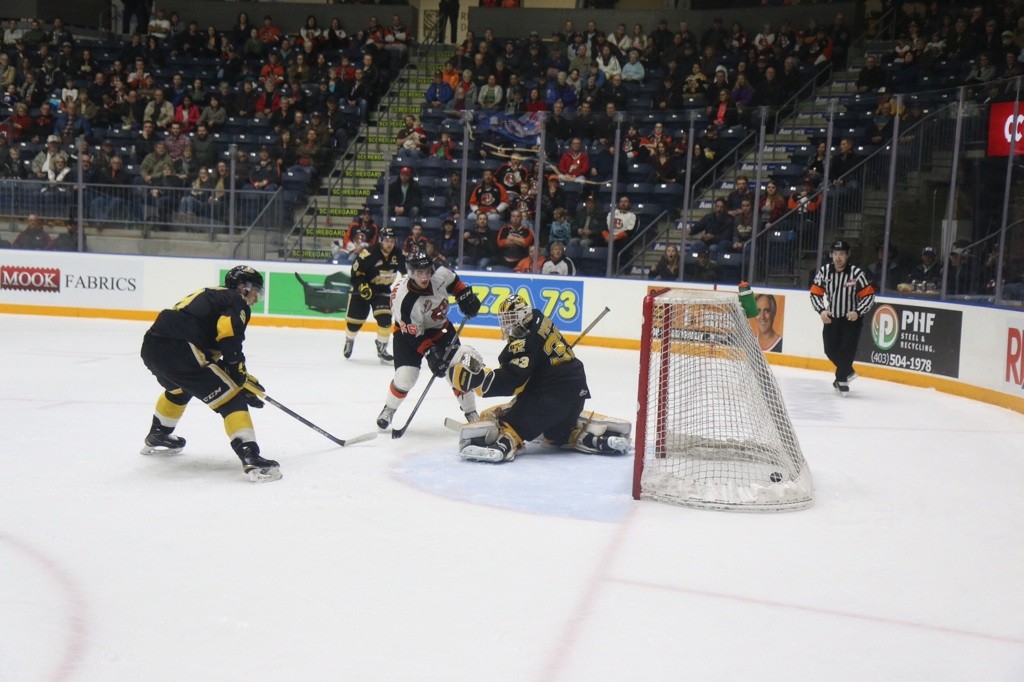 Medicine Hat, AB — On the heels of a big victory in Swift Current Friday night the Medicine Hat Tigers looked to continue the momentum against a very good Brandon Wheat Kings club. The Wheaties were fresh off a victory of their own against the Central Division leading Lethbridge Hurricanes. But a great performance by Nick Schneider, coupled with some timely scoring, led the Tabbies to a 4-3 overtime win.

The opening frame was a fantastic showing by the Tigers in what was probably their best period of hockey in a couple games. Medicine Hat was all over the Wheat Kings putting 19 shots at starter Jordan Papirny. Brandon would counter with 19 shots of their own on Nick Schneider. Medicine Hat got on the board first as Zach Fischer potted his 2nd goal of the season to kick start the 4166 in attendance. Brandon would face some penalty trouble late in the period, taking 4 straight infractions to put the Tabbies on the power play for majority of the frame. Medicine Hat got lots of chances but couldn’t solve Papirny. Brian Williams however would solve the Brandon goaltender with his 9th of the season extending the Tigers lead to 2-0 through 20 minutes.

The second period was the same as the opening frame, fast paced and high action, keeping the fans on the edge of their seat. Chad Butcher gave the Tigers a commanding 3-0 lead just before the midway point of the period. Butcher took a streaking pass from Ty Schultz and went in 2 on 1, faked pass and roofed a puck top shelf past Papirny for his 22nd of the year. Brandon would answer back with their very good power play when Ivan Provorov blasted home a one timer off the post and in to cut into the lead. However Medicine Hat took a 3-1 advantage into the break.

In the third, the Wheat Kings drove the action, putting another 20 shots on Schneider, who faced 50 shots once again this season. Medicine Hat was no slouch either throwing 52 shots on net, 15 in the period. Brandon made it 3-2 on another power play before the media timeout, Tyler Coulter potted his 21st of the year off a rebound in front. Twenty year old Mitch Wheaton who was acquired by the Wheaties at the trade deadline from Saskatoon, scored his 1st of the year on a blast from the high slot. The play was unfortunate for the Tigers as a hard backcheck from Brian Williams shot the puck into the corner with a perfect bounce to Wheaton’s stick for the goal. Two late penalty kills by Medicine Hat proved to be crucial as the game stayed tied and heading to over time.

Overtime didn’t last very long as Chad Butcher ended the night with his 23rd of the year. The 19 year old went bar down on Papirny to send the folks in attendance home happy and the playoff drive alive.

Medicine Hat has 2 days off before welcoming the Kootenay Ice to the Canalta Centre on Tuesday.