SHAW AND QUENNEVILLE NAMED TO U18 PRELIMINARY ROSTER 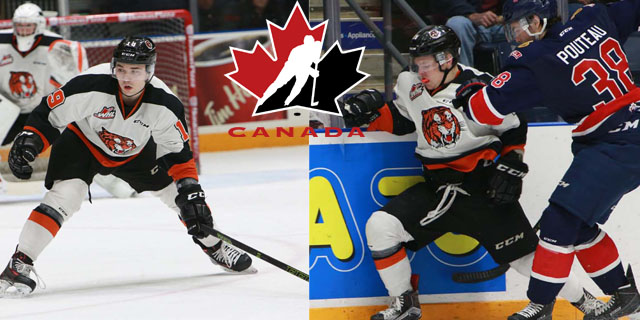 Medicine Hat, AB — The Medicine Hat Tigers would like to congratulate defenceman David Quenneville and forward Mason Shaw on being selected to Team Canada’s 23 player pre-competition roster for the 2016 IIHF World Under-18 Championship, April 14-24 in Grand Forks, North Dakota.

Both Quenneville and Shaw just completed their sophomore seasons, setting career highs in all offensive categories. David was the Tigers quarterback on the power play while Mason was setup man in front of the net for linemate Chad Butcher. Quenneville recorded 55 points this season with 12 power play markers as he used his big shot to punish goaltenders. David won the Tigers Unsung Hero Award this season.

Shaw is coming off of a season ending knee injury last year and a bounce back career season during 2015-16. Playing alongside veteran Chad Butcher the Lloydminster native potted 60 points, second on the Tigers this season. The power forward was always under the skin of his opponents even though Shaw only tips the scales at 5’8. Shaw was recipient of the Tigers Defensive Player Award and Hardest Working Award, both shared with Steven Owre and Matt Bradley respectively.

Canada will play a pair of pre-tournament games in Winnipeg, facing the Czech Republic on April 10 before taking on Sweden on April 12.

Canada will then open up the tournament April 15th when they clash with Denmark.