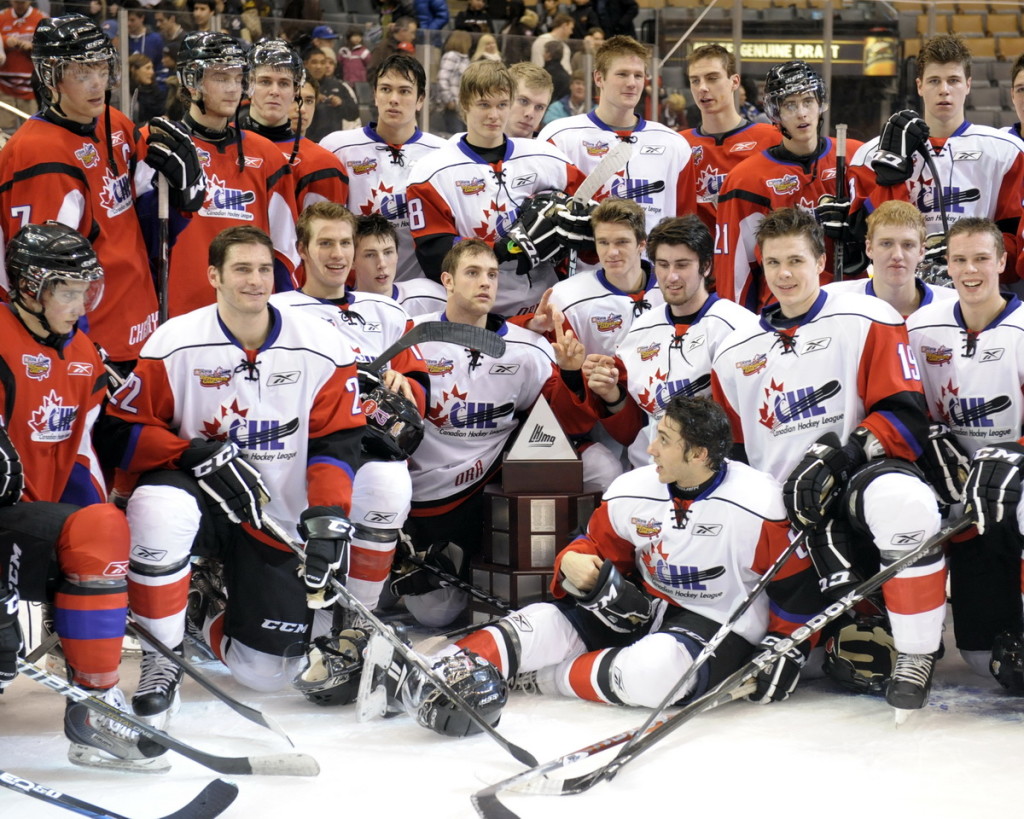 Captain Ryan Nugent-Hopkins of the Red Deer Rebels was named Player of the Game with two assists to help Team Orr skate to a decisive 7-1 win over Team Cherry at the 2011 Home Hardware CHL/NHL Top Prospects Game at Air Canada Centre.

Team Cherry came out strong in the opening few minutes and put the puck on the net forcing Team Orr starter Liam Liston of the Brandon Wheat Kings to make some big saves early on.

Team Orr’s Daniel Catenacci of the Sault Ste. Marie Greyhounds showed off the blazing speed that won him the Fastest Skater event in Tuesday’s Skills Competition when he scored shorthanded on an end-to-end rush to open the scoring at 11:56.

Catenacci’s goal was scored on one of just three Team Orr shots on Christopher Gibson of the Chicoutimi Sagueneens in the opening frame as Team Cherry led the way 13-3 in first period shots.

Sven Bartschi of the Portland Winterhawks and Jonathan Huberdeau of the Saint John Sea Dogs each scored in the opening 10 minutes of the second period to lift Team Orr to a 3-0 lead.  Both players finished the game with two points.

After the third goal, both teams changed goaltenders with Liston exiting the game stopping all 18 shots he faced.

Team Cherry found some life just minutes later as Ottawa 67’s’ forward Shane Prince found the back of the net past Owen Sound Attack netminder Jordan Binnington to cut the lead to 3-1 heading into the third period.

Binnington would stop all seven of his third period shots as the final frame was dominated by Team Orr, opening the period with three quick goals on Victoriaville Tigres’ goaltender David Honzik.

A pair of Sea Dogs’ led the way beginning with Nathan Beaulieu who scored at 2:58 of the period before forward Zack Phillips added to the lead at 3:56.

Vincent Trocheck of the Saginaw Spirit slid the puck between Honzik’s pads at 5:10 to make it 6-1 for Team Orr, with top rated defenceman Dougie Hamilton of the Niagara IceDogs’ rounding out the scoring at 18:01 on the power play.

Ryan Murphy of the Kitchener Rangers was named Player of the Game for Team Cherry.