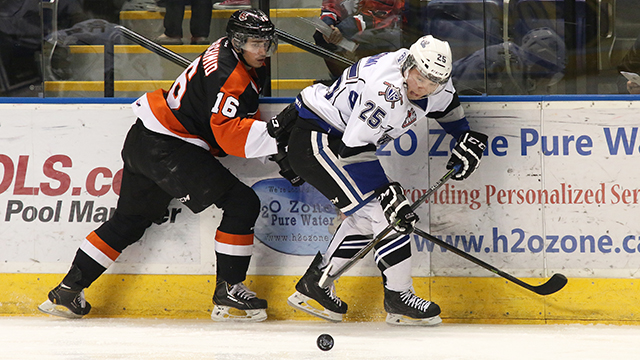 Victoria, BC — In a game that many thought would not be played, the Medicine Hat Tigers battled 55 hours on the bus to get the Island in time to play the Victoria Royals and kick off their BC 3 game road trip. The Tigers needed to be ready against a well rested team. The Tigers, who were stuck in Revelstoke for 2 days, arrived late Wednesday evening in Victoria and spent the day preparing for the Royals.

The opening period featured some stellar goaltending as Coleman Vollrath held the fort for the Royals after his team took multiple penalties including a couple cheap shots on the Tigers star players. First Trevor Cox was steamrolled from behind by a much larger Travis Brown, Cox was shaken up on the play and was seen headed down the tunnell for evaluation. Cox would later return in the period. The second incident was on goaltender Marek Langhamer. Langhamer came out to play the puck in the Tigers zone and Royals Brandon Magee lowered his shoulder with no intention of getting out of the way. The penalties, almost back to back put the Tigers on a long 5 on 3 power play.

The Tigers would be unable to make the Royals pay after the dual penalties, accumulating shots but the Royals defence did a good job blocking pucks and when a shot did go through, Vollrath was there.

The only goal of the period would go to the home side, Tyler Soy finished a 2 on 1 play past Langhamer to put the Tigers down 1-0 after the first 20 minutes.

The middle frame was a slow period, filled with whistles and stoppages, the Tigers seemed to had found their legs and they would capitalize just four minutes in. Chad Butcher, who was flying on this night, streaked down the wing and rifled a shot on net, the rebound came out to a driving Chad Labelle and he potted one upstairs for his 5th of the season. The Tigers would play a strong defensive game, as the period would end tied 1-1.

The final 20 minutes was a period of firsts for the Tigers. Ty Schultz, the last remaining Tigers on the roster who had not scored a goal this season, finally broke the goose egg as he took a pretty feed from new Tiger Dryden Hunt and wristed one just under the cross bar. Hunt wasn’t done there as he would bury his first goal in a Tigers uniform on the power play just past the midway point of the period. Another newcomer, Kyle Burroughs recorded his first point as a Tigers on Hunt’s marker. The Royals would pot a goal late, Brown wristed a puck glove side on Langhamer and just beat him, to cut into the Tigers lead. But it proved to be too late as Medicine Hat took the 3-2 victory.

The Tigers will now head across the ferry to Vancouver to take on the Giants tomorrow night. The game will be televised nationally on Sportsnet or catch the action with Bob Ridley on CHAT 94.5