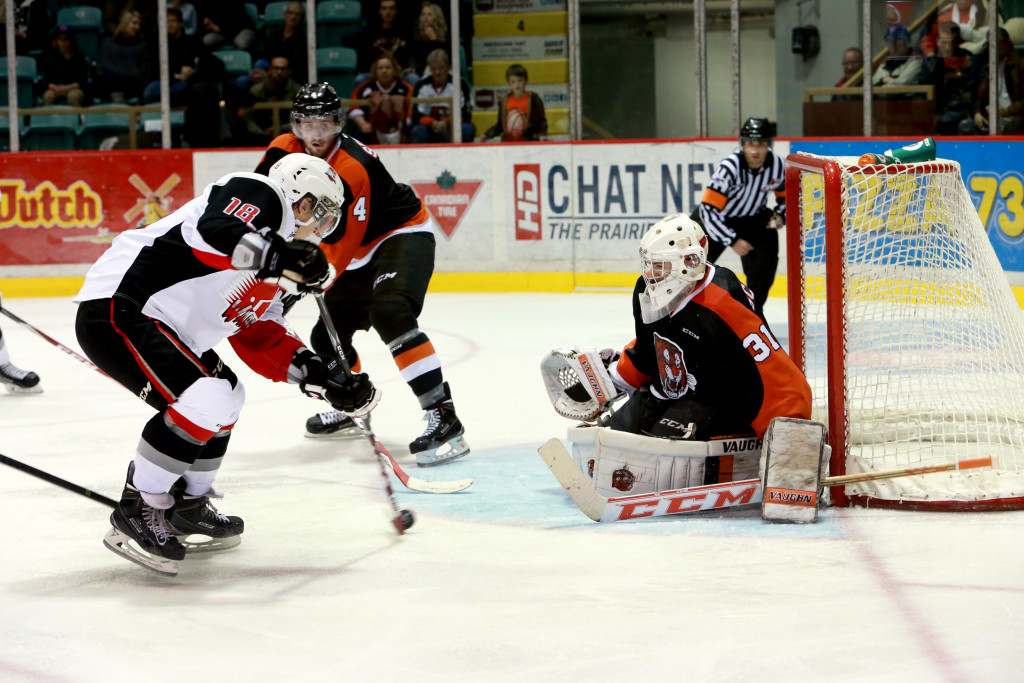 Medicine Hat, AB — The Tigers played in their 3rd home and home series of the season against the visiting Moose Jaw Warriors. The Tigers looked to pick up their third straight win and second in a row against the Warriors. The sold out crowd at The Arena was treated to an action packed game, with the Tigers winning 4-2.

The opening period was full of up and down action as both teams came out hard to try and set the tone in this home and home series. For the first time in 3 games the Tigers would find the scoreboard first on a Cole Sanford power play marker setup by Trevor Cox and Kyle Becker. Cox found Sanford on the back door play and had Warriors goaltender Zach Sawchenko down and out for his 12th of the season. The remainder of the period was all Tigers as they outshot the Warriors 13-4.

The middle frame has been a strong spot for the Tigers this season, however the Warriors would capitalize on 2 Tigers turnovers to take the lead 2-1. It was Tanner Eberle who took advantage of a goal mouth scramble to pot home a loose puck to put the Warriors on the board, then, it was local product Torrin White who would slap home a shot past Tigers goalie Nick Schneider. The period was fast paced and was filled with odd man rushes as both team’s activated their defence into the rush. Schneider would make some incredible saves to hold the Tigers within one. Sawchenko at the other end would also commit robbery as he made some fantastic saves. But as the period closed Sawchenko could not find a Blake Penner shot and the hometown boy potted his much deserved 1st goal of the season with 6 seconds remaining.

The third period saw some feisty play by both teams as they looked to grab the upper hand in a tie 2-2 hockey game. Cole Sanford would give the Tigers the lead at the 8 minutes mark of the period as he threw a puck on net, which changed direction on Sawchenko and found the mesh. Sanford would also drop the gloves with fellow goal scorer Brayden Point in a spirited tilt started by a scrum in the corner. Finally a close call by the Tigers around the Warriors net forced Sawchenko to twist his ankle, forcing the netminder out of the game for the remainder of the game. Justin Paulic was forced into action on a Tigers power play and they made short work, as just 28 seconds in, Steven Owre potted his 8th of the year to put the Tigers up for good on this night.

Three Stars of the Night

The Tigers are now off from game action for the week as the Subway Super Series takes place on Monday and Tuesday. They will head on a mini 2 game road trip starting Friday as they take on the Regina Pats and follow that up with a tilt with Brandon on Saturday.

The Tigers next home game is Tuesday November 18th when the Red Deer Rebels come to town, call the Tigers Box Office at 403-527-8406 to get your tickets today!