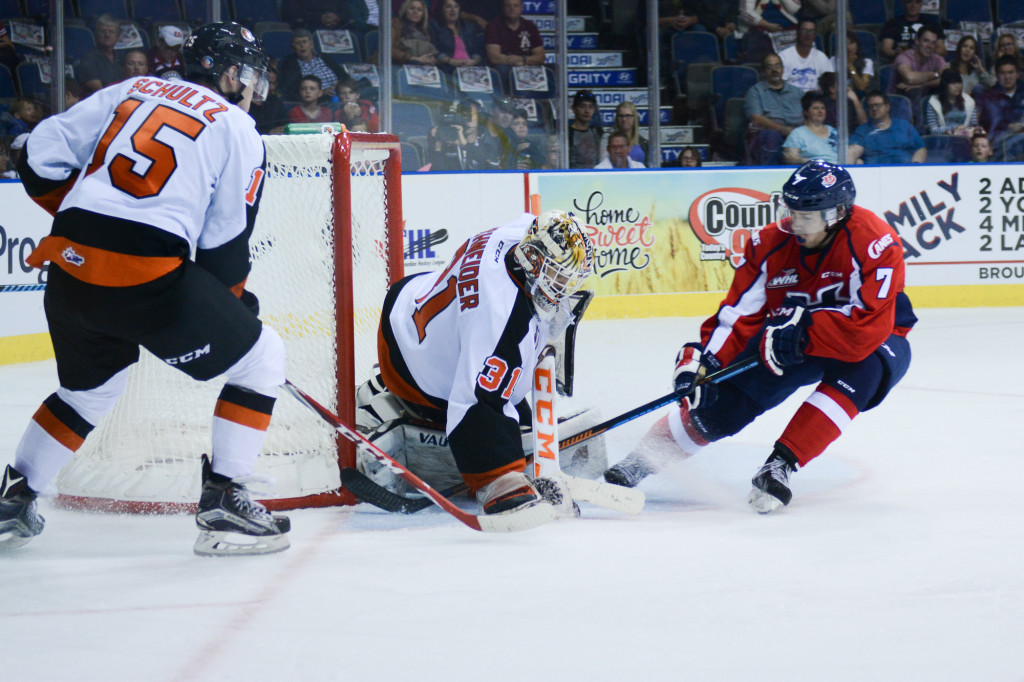 Medicine Hat, AB – The Tigers kicked off the 2015-2016 regular season against their division rival the Lethbridge Hurricanes. Things did not go quite as well as the Tabbies hoped only scoring 1 third period goal.

It didn’t take long for the Hurricanes to strike as Jaeger White beat Tigers goalie Nick Schneider on a rebound to make it 1-0 early just 1:32 into the hockey game – sixteen-year-old rookie Jordy Bellerive picked up an assist on the goal on his first WHL shift while line mate Ryley Lindgren picked up the second helper. Wong scored his first of the game, and the eventual game winner, at the 9:58 mark as he banged in a rebound for a power play goal to make it 2-0 after one period. The ‘Canes outshot the Tigers 16-13 in the period.

The ‘Canes added to their lead in the second as Wong scored his second of the night on a beautiful rush down the wing before cutting to the middle and stuffing one by Schneider 3:21 into the second period to make it 3-0 – Cory Millette picked up the assist on the goal for his second helper in the game. Tigers had their chances in the period, but Stuart Skinner stood tall stopping all 23 shots he faced through two periods.

The ‘Canes added a pair of power play goals early in the third to extend their lead. Arvin Atwal scored his first as a Hurricane just 1:57 into the third on a five-on-three – Justin Gutierrez and Bellerive earned the assists. Gutierrez scored his own power play goal less than five minutes later to make it 5-0 – Egor Babenko and Pankewicz got the helpers. On a late power play, Trevor Cox broke Skinner’s shut out big with just under four minutes left in the game as he beat Skinner with a long range point shot to cut into the lead making it 5-1 and that was how it ended.

The Hurricanes had four players (Wong, Gutierrez, Millette and Bellerive) who had multiple point games. Skinner, despite being robbed from the shutout late in the game, stood tall making 40 saves in the season opener.

Three Stars of the game were:

It’s the first time in three years the Hurricanes defeated the Tigers to start the season. The two teams will do things over Saturday night in Medicine Hat in the first ever game at the Canalta Centre.