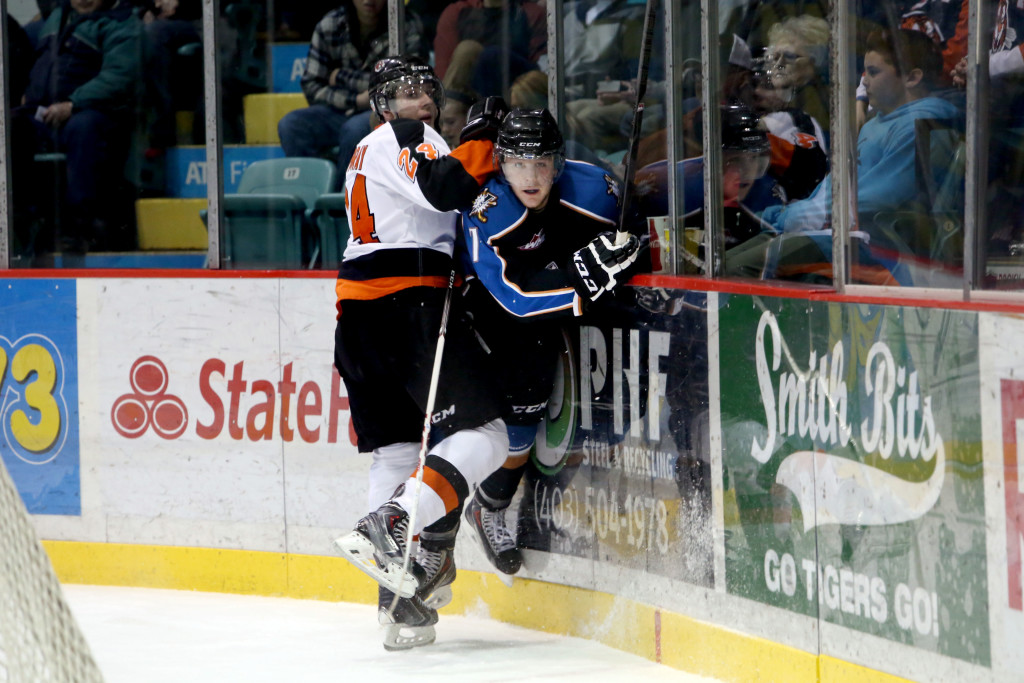 Medicine Hat, AB — The Medicine Hat Tigers grueling 4 game in 5 night road trip to the Western United States ended on Tuesday in Cranbrook against the Kootenay Ice. The Ice had been hot as of late recording a 7-3-0-0 record and playing their last game with Sam Reinhart before heading off to World Junior camp.

The opening frame saw a goaltending dual between Ice Wyatt Hoflin and Tigers Marek Langhamer, both goalies stood on their heads in the first period, making some incredible saves to keep the game scoreless. Langhamer would rob Reinhart multiple times and the Tigers would snap his 14 game point streak leaving him off the scoresheet, thanks to Langhamer. Hoflin made some great saves of his own, stopping Steven Owre and Trevor Cox simultaneously with the pads. The period ended scoreless with the Ice leading in shots 10-9.

The middle frame picked up in pace, the Tigers skated with 16 skaters on the night, a feat they’ve done many times over the past month. The extra bodies weren’t needed as Tyler Lewington potted home a power play goal 4 minutes in. Lewington would follow up a line rush led by Anthony Ast and potted the rebound. Unfortunately for Langhamer, Levi Cable would break his shut out bit with 18 seconds left in the frame as he was sprung on a 2 on 1 with Luke Philp.

In a crucial third period to both teams, the play was slowed down by a defensive battle, Sam Reinhart seemed to be on the ice almost every shift for the Ice as they looked to get the lead. Chad Labelle would answer for the Tigers however as he took a pass from rookie Mark Rassell and Alex Mowbray to bury his 3rd of the season and 2nd goal on the road trip. Just 10 seconds later off the faceoff, Cole Sanford buried his 20th of the year as the top line of the Tigers would all chip in, Trevor Cox recorded his 35th assist. The quick goals by the Tigers would deflate the Ice and home side couldn’t catch up. Cox would add an empty netter for a 2 point night, Labelle picked up the assist on the play.

The Tigers are back in action on the weekend for a double dose of hockey at The Arena. First up is the annual Teddy Bear Toss game Friday against the Kelowna Rockets, followed by a date with the Prince Albert Raiders, their first visit to Medicine Hat this season. Call 403-527-8406 for tickets!