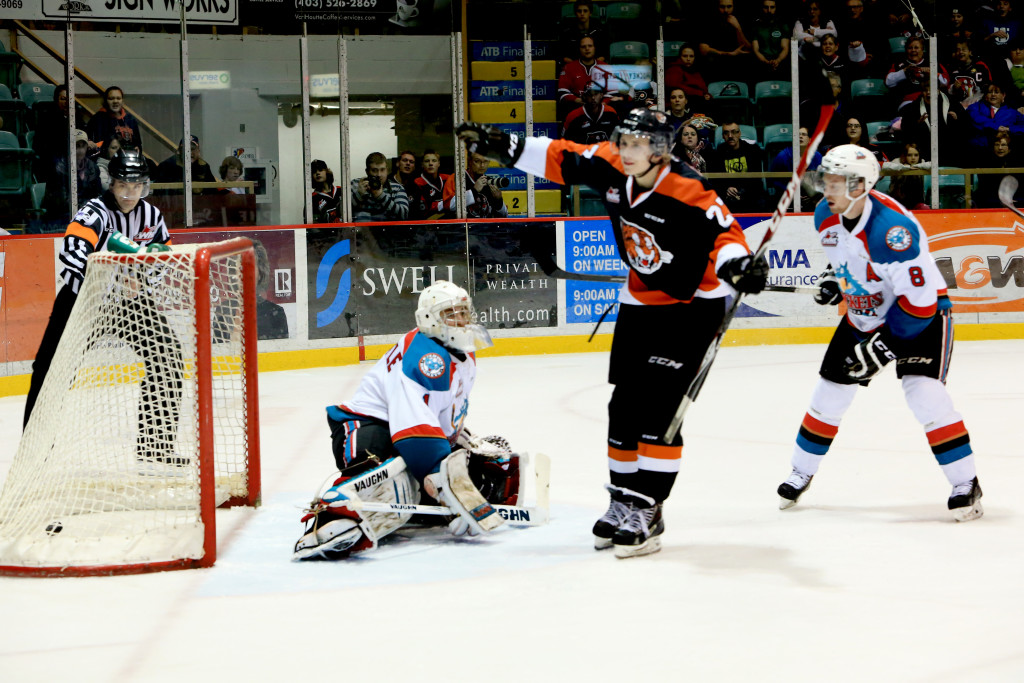 Medicine Hat, AB — Friday night’s game was circled for many Tigers fans as the #1 team in the WHL and #2 team in the CHL came knocking on The Arena doors. The Kelowna Rockets have had an excellent start to their season, same with the Tigers which put the foundation on a thrilling game.

The first period was an anxious one for Tiger fans as hundreds of people brought Teddy Bears to throw for the annual Teddy Bear Toss game. The period saw end to end action as the league’s two best teams clashed. Midway through the period there still was no score because it was a battle between Tigers Marek Langhamer and Rockets Jackson Whistle between the pipes, the #2 and #3 ranked goalies in the WHL respectively.

But with one Kelowna turnover, Mark Rassell made the teddy bears fly as be buried the goal past Whistle on a nice feed from Matt Staples, who was playing forward on this night. Hundreds of bears and winter clothing rained down on the players as once again the city of Medicine Hat pitched in to help those in need. The Tigers would take their one goal lead into the intermission, but not without a fantastic Langhamer save on Dillon Dube with under 2 minutes left.

The second was once again another battle, the Tigers power play was electric through the first 40 minutes but just could not seem to find the twine past Whistle. The Tigers ended up 0 for 6 on the man advantage on the night. But the visitors would capitalize on a power play of their own, the best in the WHL, when Justin Kirkland walked in from the blue line and made a nifty move around Langhamer to even the score. It would be the only tally of the period, as we, as expected, headed into the break tied at 1.

In the third period, the Rockets would take the lead early just 58 seconds in, Tyson Baillie wristed a shot from just inside the blue line past Langhamer to make it 2-1. The Tigers would bring everything they had, shift after shift they were able to pin the league’s top team in their own zone but could not find the net. Another bad break for the home team occurred just past the midway point when newly acquired forward Gage Quinney would pot home what would be the eventual game winner, his 7th of the season. Cole Sanford and Tigers made it interesting just a minute later when we was sprung on a breakaway by David Quenneville and netted his team leading 21st on the year.

Tigers would press for the equalizer but fell short as Baillie netted his 2nd of the night into the yawning Tigers cage.

The Tigers are back in action tomorrow night when the Prince Albert Raiders come to town for the first time this season. Tickets are still available, call the Tigers Box Office at 403-527-8406 to get yours!