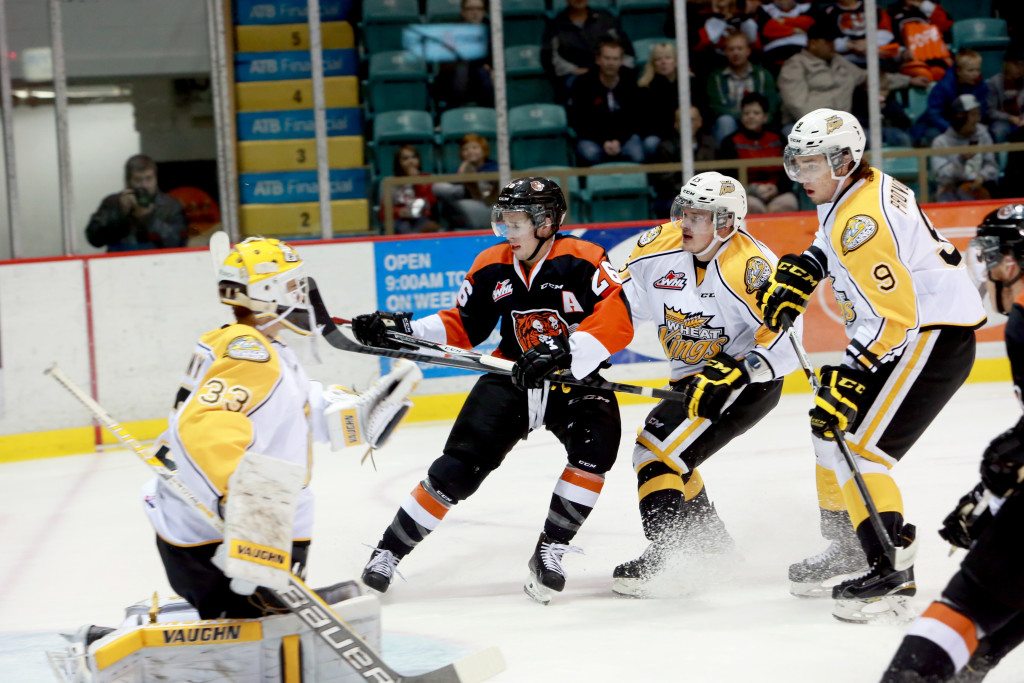 Medicine Hat, AB — After starting the season with a 6-1-0-0 record on the road, the Tigers will pack their bags and head East for a small two game road trip this weekend. The trip will be the first overnight trip on the year, a time for team bonding.

Traveling is part of everyday life for an WHL team, and the Tigers always put on the miles as they make trips out West and to Brandon throughout the season. This season the Tigers will have a few long trips which will see a 4 game road trip through the Western United States (Everett, Seattle, Portland, Kootenay) starting December 5th and a 3 game trip to Vancouver Island (Victoria, Vancouver, Kelowna) starting January 7th.

This current road trip will include a stop in Regina to face the Pats on Friday, then the boys will travel to Brandon to take on the top team in the Eastern Conference in the Wheat Kings Saturday.

WHO TO WATCH
FOR THE TIGERS
#36 Trevor Cox: The shifty forward leads all active Tigers in career scoring vs. Regina. Cox has 9 points (3G/6A) in 11 career games against the Pats, including seven points (3G/4A) in four games last season.

#5 Tyler Lewington: The Tigers captain leads the defence core for the Tigers and led the team with 121 PIM last season. He enters the game with 26 PIMs in 9 career games against the Pats. In terms of scoring, Lewington has five points (0G/5A) all-time vs. Regina.

FOR THE PATS
#18 Morgan Klimchuk: A 2013 NHL Draft Pick of the Calgary Flames, Klimchuk will be counted on as an impact player this season for the Pats. The 19-year-old has earned 7 points (5G/2A) in 11 games against Medicine Hat, including four points (3G/1A) in four games last season.

#39 Sam Steel: The 16 year old rookie lead the entire WHL in pre-season scoring. Currently, Steel has twelve points (3G/9A) in fifteen games and is currently 5th in WHL rookie scoring. This will be first time the orange and black will face Steel in a Pats uniform.

#35 Daniel Wapple: The veteran goaltender is in his second season with the Pats, but has ties back to the Tigers when he was acquired from Moose Jaw on September 17th, 2013.  Wapple appeared in 24 games for the Tabbies before a January 10th deadline deal sent him to Regina. Currently this season, Wapple has 2.93 GAA in 15 appearances.

WHO TO WATCH
FOR THE TIGERS
#21 Chad Butcher: The 18 year old forward has had an impressive start to the season and only needs two points to eclipse last year’s total. Butcher holds the WHL’s longest goal scoring streak with 8 games (although it was snapped Oct. 25). Look for Butcher to use his speed and slick hands against the best team in the East.

#3 Tommy Vannelli: Although the blueliner only has 2 points in 5 games versus the Wheat Kings, Vannelli has been a stable force on the power play and in the Tigers end. Vannelli currently sits tied for 3rd in WHL defenceman goal scoring with 6.

FOR THE WHEAT KINGS
#33 Jordan Papirny: The workhorse for the Wheat Kings this season, Papirny has started in 17 of the team’s 20 games to the start the season, sporting a 13-3-1-0 record. The 18 year old stopped 33 saves on November 1st to record the shutout against the Tigers. The Wheat Kings have not registered a regulation home loss to date and Papirny is a big reason why.

#12 Jesse Gabrille: The Wheaties forward is the active leader in points against the Tigers, recording five points (4G/1A) in four games. The gritty forward leads the team in penalty minutes (39) and sits 5th in team scoring.

#9 Ivan Provorov: A 2015 NHL Draft prospect, the Russian import is in his first season on the Wheat Kings blueline and is already third in team scoring and currently leads all rookies in the WHL with 22 points (8G/14A) in 20 games (as of Nov. 10). Provorov represented his country at the Subway Super Series this week.

HIGHLIGHTS VS. BRANDON
Markus Eisenschmid: Scored his first goal the season last year vs. Brandon on October 19th, 2013
Anthony Ast: Recorded his first multi-goal game in a Tigers uniform in a game on February 11th, 2014