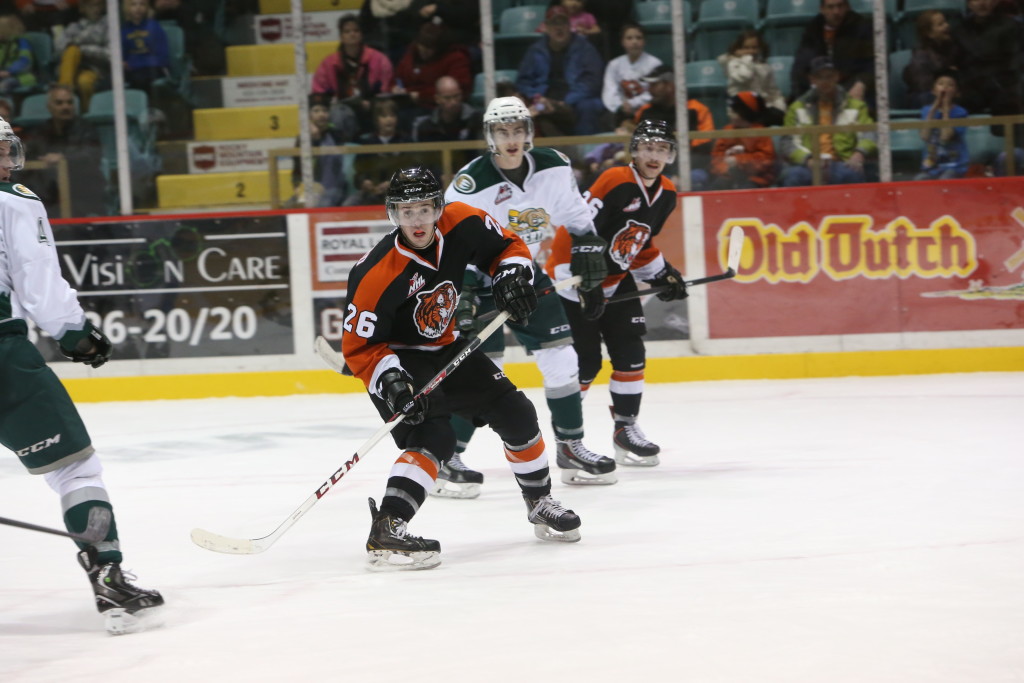 Medicine Hat, AB — Sporting the WHL’s best home record and most home victories with 12, the Tigers will pack their bags and head West to begin a 4 game road trip, 3 in the United States Division. The trip will be the first trip of 2 or more days.

Traveling is part of everyday life for an WHL team, and the Tigers always put on the miles as they make trips out West and to Brandon throughout the season. After this weekend’s trip the Tigers have only one remaining 2+ day overnight trip when they travel to Vancouver Island (Victoria, Vancouver, Kelowna) starting January 7th.

This current road trip will include a Friday night tilt in Everett against the US Division leading Silvertips, Saturday in Seattle to face Shea Theodore and the Thunderbirds and Sunday evening in Portland to face Miles Koules and the Winterhawks. The trip wraps up with a visit to Kootenay on Tuesday before heading home to take on the Kelowna Rockets December 12th.

WHO TO WATCH
FOR THE TIGERS
#36 Trevor Cox: The shifty forward leads all active Tigers in career scoring vs. Everett, scoring 3 points in 3 games (1G, 2A). Cox also ranks second in assists in the WHL with 31 and leads all players in shorthanded assists with 4.

#15 Ty Schultz: The Tigers rookie defenceman has been heating up as of late, with points in his last 2 games, Schultz already has 9 assists on the season and 3 last weekend alone. Schultz has been paired with offensive defenceman Tommy Vannelli the past few games and has excelled alongside the 2nd year veteran.

#20 Anthony Ast: Ast made his season debut on Friday night against Red Deer, scoring his first goal of the season. Since then Ast has provided the spark and energy needed to fuel the Tigers attack. Ast has been dynamite on a line Alex Mowbray and Chad Labelle.

FOR THE SILVERTIPS
#95 Nikta Scherbak: The Russian born Scherbak has been out of the lineup for a few games after taking a huge hit in a game versus Seattle. Prior to the injury, Scherbak had 30 points in 20 games and despite being out of the lineup, continues to lead the team in scoring.

#15 Kohl Bauml: The 20 year old Saskatoon native was just announced as team captain for the ‘Tips and entering his 4th season with the club has had a hot start, recording 20 points in 25 games (8 away from his season total last year). Bauml stature is similar to Tigers forward Trevor Cox, only standing 5’9, Bauml is a offensively dynamic player.

#3 Noah Juulsen: An Abbotsford, BC native, the 17 year old has produced offensively from the back end for the ‘Tips this season. Already doubling his point totals (19 points in 25 games, compared to 10 in 2013-14), Juulsen is a good puck mover and the Tigers will have to watch for his offensive game.

#30 Austin Lotz: A key contributor to the ‘Tips having the best goals against in the WHL, Lotz continues to ride his momentum from last season’s 31 win campaign. In 18 games played for the 19 year old, he sports a 2.63 GAA and 0.909 SV %. Lotz was in the net last year when the Tigers played Everett, allowing 3 goals on 26 shots.

HIGHLIGHTS VS. EVERETT
Kyle Becker: Took the only penalty for the Tigers versus the ‘Tips in last season’s game
Trevor Cox: Has had a point the past two seasons in each game vs. Everett
Anthony Ast: Has 2 points in 3 games versus Everett as a member of the Vancouver Giants
Marek Langhamer: Will face the Silvertips for the first time in his WHL career

WHO TO WATCH
FOR THE TIGERS
#12 Kyle Becker: Becker led all active Tigers last season against Seattle with 2 points in the only game against each other. Becker has had an excellent start to his season, recording 13 points (6G, 7A) in 25 games. The blueliner is a key cog in the Tigers power play and plays big minutes.

#5 Tyler Lewington: Tyler was a goal away from the coveted Gordie Howe hat trick last season recording an assist and a fight in October’s overtime loss. Lewington currently leads all Tigers defenceman in scoring with 20 points and has scored a goal his last 2 games, including the OT winner Friday against Red Deer.

#3 Tommy Vannelli: Heading to his home country, Vannelli may have some extra jump in his step, however the 19 year old has had a great season, currently tied for the WHL lead in defenceman goals with 10, Vannelli has a cannon from the blue line, making him a dangerous weapon on the power play.

FOR THE THUNDERBIRDS
#12 Ryan Gropp: The 18 year old had a great rookie campaign last season recording 42 points in 59 games, currently Gropp has 22 points in 27 games which leads the T-Birds. Gropp also leads the team in goals with 12 and has picked up the offense since the departure of Matthew Barzal who is out with an injury.

#32 Scott Allan: The 6’6 defenceman was traded from the Tigers to the T-Birds earlier in the year to help bolster the Seattle blueline, in 14 games Allan has 3 points including his first WHL goal.

#28 Keegan Kolesar: Kolesar is a big kid from Winnipeg, standing in at 6’1 and 220 pounds, Kolesar enters his second WHL season as he played 60 games as a 16 year old last year. Since then Kolesar has already doubled his point total (14 points in 27 games) and is second on the team in power play goals. Kolesar was also rated as a “B” prospect (2nd round) on the NHL’s Central Scouting list for this year’s draft.

#13 Matthew Barzal: Although the Tigers will not see the 17 year old phenom, he is worth mentioning. Barzal is an electrifying talent for the T-Birds, selected 1st overall in the Bantam Draft, Barzal entered the WHL right from bantam and recorded 54 points in 59 games. Barzal was hurt earlier this season and won’t be back until after the Christmas break.

WHO TO WATCH
FOR THE TIGERS
#17 Blake Penner: Penner was the active Tigers leader in points against Portland last season, recording 2 points in the only game played, a 5-3 loss in Medicine Hat. Penner has been hot offensively as of late, and is creating chances while on the second line with Steven Owre and Chad Butcher.

#30 Marek Langhamer: Langhamer had a troublesome start against the Hawks last season allowing 4 goals and will look for some revenge in this game. Langhamer currently has the best GAA among WHL goalies (with more than 700 minutes).

#7 Matt Bradley: The Tigers leading rookie in scoring has been on a tear recently including a 4 point performance against Vancouver. Bradley is ranked 5th in the WHL in rookie scoring with 17 points (7G, 10A).

FOR THE WINTERHAWKS
#19 Nicolas Petan: The Winnipeg Jets prospect was returned by the NHL club earlier this season. Petan has not slowed down from his 113 point season last year and currently has 29 points in 22 games. Petan was also just chosen to head to the World Junior Championship camp for Team Canada.

#27 Oliver Bjorkstrand: A 50 goal scorer in the WHL last year, Bjorkstrand is back at it again this season leading the ‘Hawks in scoring with 34 points in 24 games, including 18 goals. Bjorkstrand is an import from Denmark and was drafted in 2013 by the Columbus Blue Jackets.

#12 Miles Koules: Koules was sent to the ‘Hawks earlier in the season by the Tigers for a 4th round bantam draft pick. Since the trade Koules has played alongside Chase De Leo, the ‘Hawks second leading goal scorer, and has 18 points since joining the team (8G, 10A).

#7 Paul Bittner: Bittner has garnered a lot of attention for this year’s NHL Entry Draft being rated an “A” class player (1st Round) by NHL Central Scouting. Bittner is a big body forward and uses his size to create space and opportunities for his linemates. Bittner currently has 16 points in 23 games for the ‘Hawks.

HIGHLIGHTS VS. PORTLAND
Blake Penner: Recorded his 2nd multi-point game of the season last year against the ‘Hawks

WHO TO WATCH
FOR THE TIGERS
#36 Trevor Cox: Cox is the Tigers leader against the Ice this season in points with 4 in 2 games (3G, 1A). All 4 points came during the 7-3 win November 19th. Cox also led the Tigers in points last season against Kootenay with 9 points in 6 games.

#11 Steven Owre: Owre has 2 points in 2 games versus the Ice and has been instrumental in the success of the Tigers top line featuring Cole Sanford and Trevor Cox. Steven has also been used in a second line role with Chad Butcher and Blake Penner, supporting them with good defensive play and playmaking abilities.

#27 Mark Rassell: Rassell has created lots of chances as of late and will look to continue his success this season. Although only 2 goals have made it on the scoresheet, it is just a matter of time before the 17 year old rookie breaks through.

FOR THE ICE
#23 Sam Reinhart: The Buffalo Sabres draft pick was returned by the big club in October and since then Reinhart has produced over 2 points per game recording 23 in just 11 games. Reinhart currently has 5 points against the Tigers this season.

#20 Tim Bozon: Bozon has overcome the dramatic illness he suffered last season to be a force in the Ice lineup. Playing alongside Reinhart and Jaedon Deschaneau, Bozon has combined his playmaking abilities to his already well-rounded game. A small injury put the forward out for a few weeks, but hasn’t slowed down with 19 points in 13 games.

#30 Wyatt Hoflin: The last time Hoflin faced the Tigers he stopped 48 saves to record the shutout in a 3-0 Ice victory. Hoflin, who was back-up to Mackenzie Skapski last season, has embraced his role as a starter and despite the slow start has bounced back to put the Ice in a playoff position.

HIGHLIGHTS VS. KOOTENAY
Trevor Cox: Recorded a 4 point game and his first WHL hat trick against the Ice Nov. 19

Mason Shaw:Netted his first multi-point game of the season against the Ice Nov. 19