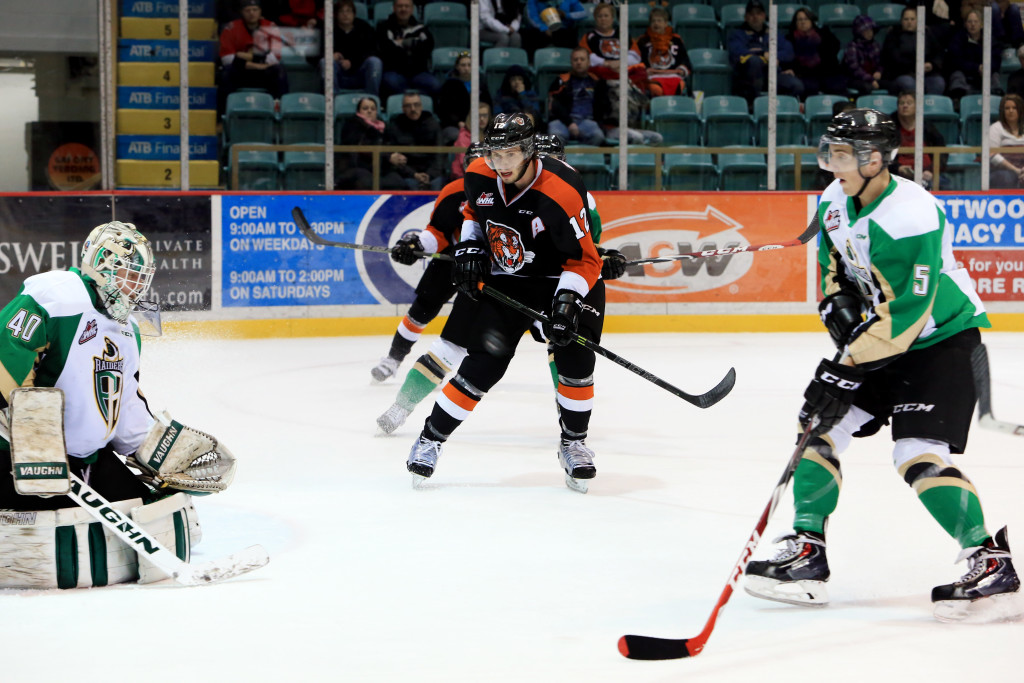 Medicine Hat, AB — The Medicine Hat Tigers were fresh off their Teddy Bear Toss game which saw a truck load of bears and winter clothing donated by the Tigers faithful, the game however was a heartbreaking loss to league leading Kelowna. On Saturday night, the Tigers looked to avoid losing back to back games at home for the first time this season.

Quick, is a word that you could describe the opening frame. Tigers Head Coach Shaun Clouston started his energy line of Chad Labelle, Markus Eisenschmid and Alex Mowbray. The trio brought the building alive just 13 seconds into the game as Labelle would open the scoring, all three linemates would get in on the goal.

The period, and gamesheet for that matter, was filled with 26’s and 36’s on this night, Cole Sanford struck, as he finished a beautiful passing play setup by Trevor Cox. The Raiders would answer will a power play goal of their own to pull within one goal before the buzzer rang.

The middle frame started once again with a bang, as fans were finding their seats with their snacks, Cox would bury his 10th on the season, giving the Tigers another double digit goal scorer. Just two minutes after the Cox goal, he would setup Ty Stanton on another beautiful passing play. Cox found Stanton driving the net and put it right on the tape for the tap in, for Stanton it was his 5th of the season.

The Raiders were determined to get back into the game as multiple times they laid the pressure on the Tigers, pinning them into their own end. The pressure got to the Tigers as Simon Stransky potted one just before the midway point of the frame. The Raiders would follow that goal with another, Cory Millette netted his 6th of the year to pull the visitors within one.

A late penalty by the Raiders proved to be costly as the Tigers top guns went to work, it ended up being Cox once again, as he rifled a cannon of a slap shot from the blue line past Raiders keeper Nick McBride, restoring the 2 goal lead heading into the break.

The third period had more goals as it was the Tigers who got on the scoreboard, Cole Sanford would wrist the puck on net, McBride could not handle the puck in his glove and got past the goalie, barely getting across the line. Under a minute later Prince Albert responded; Brendan Guhle slapped home a shot from the blue line with traffic in front to keep the Raiders clawing at the home side.

It was a back and forth affair at The Arena on this night, Nick Schneider was good when he needed to be for the Tigers, keeping them in the game including robbing Jordan Tkatch on a 2 on 1 with the pad. Schneider made 32 saves in the game for his second consecutive victory.

The Tigers are back in action on Wednesday December 17th against the Kamloops Blazers and will mark the final game of the “first half” before the Christmas break. Call the Tigers Box Office at 403-527-8406 for tickets!