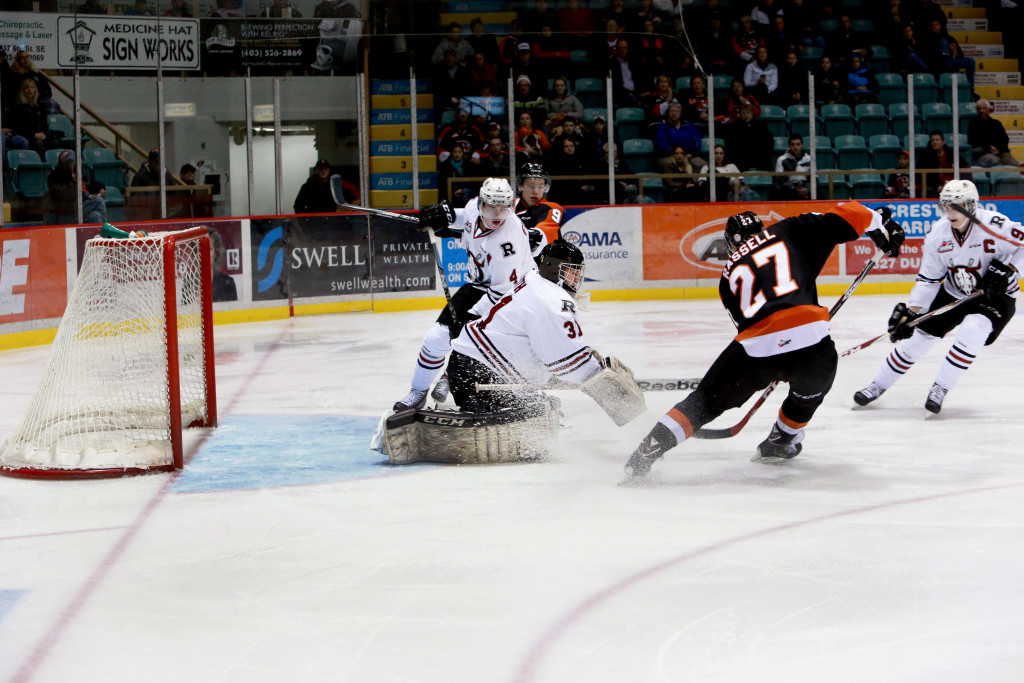 Medicine Hat, AB — The Medicine Hat Tigers came home on Tuesday night after a tough road trip out East over the weekend. The Tigers looked to avoid losing three straight regular season games for the first time in 2 seasons. Tuesday also marked the Tigers first game at home in 10 days.

The first period was a typical Tigers period as they controlled the play and dominated their opponent with speed and skill. The home team would get on the board as Cole Sanford netted his team leading 15th of the season. The goal was setup by Trevor Cox as the two forwards played “catch” with the puck before Sanford finished the play, Tyler Lewington also got an assist on the break out. That was the only goal of the period and the Tigers held the small 1-0 lead after 20 minutes.

The middle frame saw a push back from Brent Sutter‘s Rebels as Tigers goaltender Marek Langhamer had to be sharp numerous times, most notably was a stop on Preston Kopeck at the side of the net to help keep the Tigers out in front. The Tigers defence would continue to play offensively for the orange and black as Ty Stanton and Tommy Vannelli both scored. Stanton would receive an errand Chad Labelle pass and wrist home his 4th of the year. Just 4 minutes later Vannelli would escape the penalty box and streak down the left side, rifling a shot past the glove of Rebels keeper Rylan Toth.

The final period was penalty filled for the Tigers as they found themselves on the back end of two 5 on 3 penalty kills late. Earlier on an offensive zone face-off, Chad Labelle would win the draw and rookie David Quenneville, playing in his 3rd game since arriving home from U17’s, showed Tigers fans his patented slap shot, which found the twine and gave the Tigers a 4-0 lead. Then the penalties started. The Rebels mounted a good push back on the Tigers as Marek Langhamer once again had to be sharp, however his shutout was broken just past the midway point as Presten Kopeck batted home a loose puck. Red Deer would get one more on Langhamer on the power play as Wyatt Johnson finished a nice tic-tac-toe play, but it was too little too late and the Tigers took the victory, their 15th, 4-2.

The Tigers now head West to Cranbrook to get their first look at Sam Reinhart and the Kootenay Ice tomorrow night, with puck drop starting at 7:00pm.

Next home game will be Saturday November 22nd as the Kootenay Ice finish up a home and home with the Tigers at The Arena for a 7:30pm start. Call the Tigers Box Office at 403-527-8406 to get your tickets!